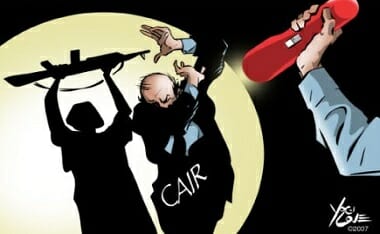 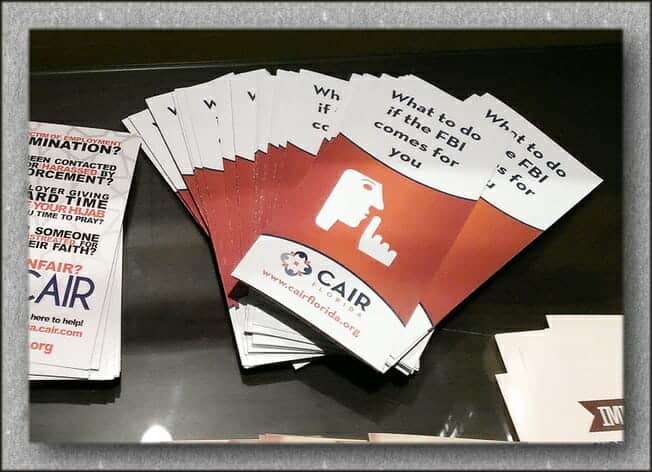 IBD Reports on a Federal Judges report and makes mention that “He refused requests to strike their names from the list.” Which tells me he was under pressure to xix these connections.

Islamofascism: Now that a federal judge has unsealed evidence showing the three most prominent Muslim groups in America support terror, Washington must cut all ties with them.

U.S. District Judge Jorge Solis has ruled there is “ample evidence” to support the Justice Department’s decision to blacklist the Islamic Society of North America (ISNA), the North American Islamic Trust (NAIT) and the Council on American-Islamic Relations (CAIR) as unindicted co-conspirators in the 2008 Holy Land Foundation terror trial.

He refused requests to strike their names from the list.

At the trial, which ended in guilty verdicts on all 108 counts, FBI agents testified that ISNA, NAIT and CAIR are fronts for the federally designated terrorist group Hamas, which has murdered countless Israelis and at least 17 Americans.

Indianapolis-based ISNA controls most of the Islamic centers and schools in the country through its NAIT subsidiary — a Saudi-funded trust that holds title to radical mosques, including the notorious 9/11 mosque in D.C. CAIR, headquartered within three blocks of the U.S. Capitol, is the nation’s largest Muslim-rights group. The trio for years have maintained they are “moderate” nonprofits that condemn terrorism.

However, “The government has produced ample evidence to establish the associations of CAIR, ISNA and NAIT with Hamas,” Solis said in his 20-page ruling, written in July 2009 and unsealed just last Friday.

Solis noted that investigators have traced “hundreds of thousands of dollars” from ISNA and NAIT bank accounts to Hamas suicide bombers and their families in Gaza and the West Bank.

He said CAIR also took part “in a conspiracy to support Hamas.” Phone lists and other documents introduced by the government reveal CAIR and its founding chairman Omar Ahmad have operated as key members of Hamas’ U.S. wing, known as the “Palestine Committee,” according to the ruling.

In a hotel room, participants hatched a scheme to disguise payments to Hamas suicide bombers and their families as charity. ISNA also was mentioned at the meeting.

You might ask, so what? Well, the radicals in this country aren’t the fringe; they represent the Muslim establishment.

Outrageously, these dangerous fronts, cloaked as they are in religious garb, still enjoy charitable tax status. The IRS exempts their funding, much of which comes from the Middle East.

WASHINGTON – A federal judge has determined that the Justice Department provided “ample evidence” to designate the most prominent Muslim group in America as an unindicted terrorist co-conspirator.

According to a federal court ruling unsealed Friday, the Washington-based Council on American-Islamic Relations has been involved in “a conspiracy to support Hamas,” a federally designated terrorist group that has murdered at least 17 Americans and injured more than 100 U.S. citizens.

The 20-page order, signed by U.S. District Judge Jorge A. Solis, cites “ample evidence” that CAIR participated in a “criminal conspiracy” led by the Holy Land Foundation, Hamas’s main fundraising arm in the U.S. As a result, the judge refused CAIR’s request to strike its name from documents listing it as an unindicted co-conspirator in the case.

“The four pieces of evidence the government relies on do create at least a prima facie case as to CAIR’s involvement in a conspiracy to support Hamas,” Solis wrote in his July 2009 ruling.

The evidence includes documents introduced by the government showing CAIR and its founding chairman Omar Ahmad have operated as key members of Hamas’ U.S. wing, known as the “Palestine Committee.” In addition, FBI wiretaps and agent testimony have placed both Ahmad and CAIR’s acting executive director – Nihad Awad – at a secret meeting last decade with Hamas leaders in Philadelphia. Meeting in a hotel room, participants hatched a scheme to disguise payments to Hamas suicide bombers and their families as charity.