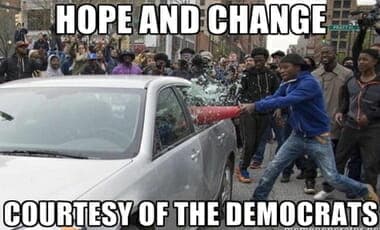 Do Democrats think you’re so stupid that you don’t see through their pathetic playacting?

Since it’s not a web ad featuring a super cool, hipster-celebrity making suggestive analogies about President Obama’s oh-so-dreamy and glamorous political qualities, I doubt it will get nearly the same traffic as Team Obama’s recent Lena Dunham ad — which is most unfortunate, because rather than a cotton-candy, war-on-women appeal to the youths, we actually see the real-world effect that Obama’s policies have had on hardworking, middle-class Americans.

President Obama’s policies have been brutal to the business world, and small businesses in particular. An onslaught of red-tape regulations, ObamaCare, the threat of higher taxes, generally poor economic growth — none of these have been kind to entrepreneurs or owners trying to grow their outfits. Despite the Obama administration’s several showy moves to come to the aid of small business, their vital signs just haven’t picked up, via Bloomberg Businessweek:

Companies with fewer than 20 employees have actually shed jobs during the economic recovery; the Intuit Small Business Employment Index was 0.9 percent lower in October 2012 than in July 2009. Moreover, since May, the index has moved in the opposite direction from BLS estimates of overall employment, with Intuit reporting a loss of 10,000 small business jobs in each of the last two months alone. …

Compensation and hours are similarly weak. Adjusting for inflation and seasonality, monthly compensation for all employees (including the owners) at businesses with fewer than 20 employees is 10.2 percent lower than when the president took office.

California is in a worse boat that Virginia, for instance, we [California] have ranked dead last 8-years in a row as far as a business friendly environment goes:

It was alarming the first three or four times California was ranked last among 50 states for business environment. Now, Chief Executive magazine’s annual ranking, based on a survey of 650 chief executives on taxation, regulation, workforce quality and living environment, again places California dead last, 50th of 50 – for the eighth year in a row.

Eight years in a row ceases to be alarming. It now is a defining status.

Gov. Jerry Brown insists those who say California is unfriendly to business are wrong. But Mr. Brown, of course, is not the chief executive officer of a private business. He is the top executive of a deficit-burdened, intrusive, bloated government bureaucracy that has perfected squandering other peoples’ money while botching delivery of services such as education and lavishing public employees with unaffordable pay and benefits.

California public school teachers are the nation’s highest-paid, while their students’ performance ranks among the worst. The state’s various unfunded pension and retirement health care benefits promise to bankrupt the already overextended government.

“California’s enduring place of perpetual decline continues in this year’s ranking,” the magazine said. “Once the most attractive business environment, the Golden State appears to slip deeper into the ninth circle of business hell.”

The CEOs aren’t alone in their harsh critique. The state got an “F” grade in January from Thumbtack.com and the Kauffman Foundation in a survey of 6,000 small businesses across the nation, and the Tax Foundation ranked California 48th worst on business taxes.

There is little prospect of improvement. Despite finding itself in a hole, state government keeps digging. This week the state Senate Judiciary Committee killed a California Chamber of Commerce-sponsored job-creator bill to protect employers from inappropriate litigation.

Mr. Brown’s Air Resources Board is ratcheting up costly new regulations and preparing an ill-advised cap-and-trade carbon-emissions auction to coerce private energy providers to do things the government’s way. The governor and other Big Government champions also are advancing proposals for the November ballot to extract upwards of another $20 billion per year in taxes.

As CEO magazine’s poll shows, the state’s failings are obvious to business people. But Mr. Brown and California’s other governmental leaders just don’t get it.

In the above video we see Obama saying the following:

“IF you are already getting health insurance on your job, then, that doesn’t change. Health insurance reform passed was passed six months ago. I don’t know if anybody here has gotten a letter from their employer saying, ‘you have to go on government health care’….”

This statement is just false. I have posted in the past on this topic of companies dumping their plans because it will be cheaper for them just to dump their employees onto the government plan. Here is a recent example exemplified over at HotAir – 3M to dump retirees from medical coverage:

Remember when Barack Obama repeatedly promised that no one’s current coverage would have to change if Congress approved the health-care overhaul he demanded?  When the ObamaCare bill passed, the Associated Press suddenly discovered that the change of tax law that would supposedly generate billions of dollars to pay for the costs of the bill would also drive companies to dump retirees from their existing drug coverage and push them into Medicare.  Minnesota-based 3M became one of the first large corporations to do just that — and push retirees off of all their plans as well:

Instead, the company will direct retirees to Medicare-backed insurance programs, and will provide reimbursement for that coverage. It’ll also reimburse retirees who are too young for Medicare; the company didn’t provide further details.

The company made the changes known in a memo to employees Friday; news of the move was reported in The Wall Street Journal and confirmed Monday by 3M spokeswoman Jackie Berry.

The ObamaCare bill created a fund to subsidize employers who didn’t dump their retirees, but the WSJ notes that it simply wasn’t enough to change the negative incentives created by the government interventions:

The changes won’t start to phase in until 2013. But they show how companies are beginning to respond to the new law, which should make it easier for people in their 50s and early-60s to find affordable policies on their own. While thousands of employers are tapping new funds from the law to keep retiree plans, 3M illustrates that others may not opt to retain such plans over the next few years. …

Democrats that crafted the legislation say they tried to incentivize companies to keep their retiree coverage intact, especially until 2014. The law creates a $5 billion fund for employers and unions to offset the cost of retiree health benefits. More than 2,000 entities, including many large public companies, have already been approved to submit claims for such reimbursement. 3M did not apply.

How did Democrats come up with the $5 billion figure for subsidies to protect retirees from losing their plans?  From the looks of it, they simply made it up.  They also didn’t do much calculation to determine whether the subsidies would actually incentivize employers into rejecting this strategy for cost savings.  To some extent, they may not have been able to make that calculation, because thanks to the massive amount of ambiguity in the bill, no one can really say for sure what the future costs would be.  And of course, that’s why 3M chose now to dump the retirees.

3m has 23,000 retirees, many of them likely to be living in Minnesota.  They’re also likely to vote in the upcoming midterms, perhaps even more likely now than ever.  That won’t be good news for House Democrats in the Minnesota delegation hoping to win a new term in four weeks. 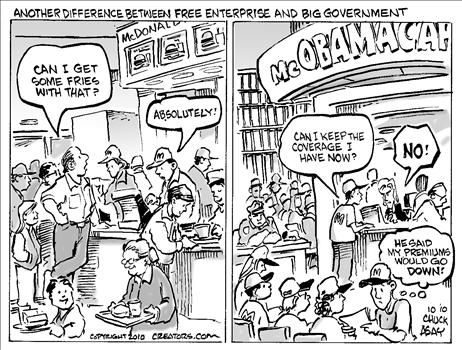 We already know we will not know the ultimate costs… and going off of experience, we know all government programs are always more than what we are told:

This is a concern for the Dems and will be a losing issue (among the many others). Here are a couple examples of the impact this ridiculous bill has had on business:

Take note that the persons opposed to tanning altogether are the ones who got this 10% tax added. They know that even a 10% tax (just like all the taxes added to smoking) dissuades someone from that action. Similarly, all the taxes coming down the pike will do what exactly to consumers wanting to go out and spend??

In one scene, Snooki — with her impressively orange tan — broke the shocking news that she’s been staying away from her home away from home: Tanning salons.

Snooki was referring to a provision in the Health Care and Education Reconciliation Act that mandates tanning salons impose a 10 percent tax on UV-ray sessions.

McCain and Jersey Shore team up. Why would a President who is concerned about jobs and people (supposedly) put a 10% on small business owners that would do nothing but hinder job growth. Many of his policies hinder this.