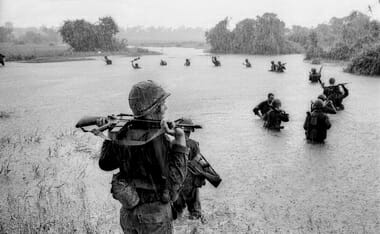 Did the United States win or lose the Vietnam War? We are taught that it was a resounding loss for America, one that proves that intervening in the affairs of other nations is usually misguided. The truth is that our military won the war, but our politicians lost it. The Communists in North Vietnam actually signed a peace treaty, effectively surrendering. But the U.S. Congress didn’t hold up its end of the bargain. In just five minutes, learn the truth about who really lost the Vietnam War

Remember, these countries actually fell to the spread of Communism:

Here is a great thought experiment from David Mamet:

Let us squint for a moment, to see if we may blur the particulars and perceive a familiar outline in an unfamiliar act. A young wealthy woman puts on vaguely military garb and travels to a far-off, less-developed land to participate in adventure. She meets there the more primitive indigenous people, admires their hunting abilities, and, in fact, poses with one of their large guns, famous for having bagged many trophies.

Q. What is she doing?

A. Going on Safari.

Jane Fonda’s Adventure Tourism is, then, incorrectly, identified not as a safari but as “Ending the War.”

This was a no-cost, exhilarating adventure, all the more attractive because it took place in the purlieus of danger, but contained no danger; and it could be described as “humanitarianism,” which is an edifying title, rather than “slumming,” which is perhaps less so.

Ms. Fonda did not choose to take her wish for adventure into the veldt, where, after all, the beasts might strike back, but to Hanoi in 1969. At the height of the Vietnam War—to pose with the enemy, secure in the knowledge that her (largely inherited) position would protect her from prosecution for what was, arguably, an act of treason.

In her reliance upon this protection she was, of course, availing herself of that same privilege and culture whose destruction she was endorsing in posing by the gun.

Her pilgrimage, as Mr. Hollander points out, was not unique. Intellectuals through the twentieth century have traveled see the Potemkin Villages of Stalin’s “Workers Miracle,” the happy children of China, and the grinning, sun-drenched Campesinos [peasants] of the Island Paradise. They have believed what they were shown.

From the Webbs, and Bertrand Russell, to Susan Sontag, Jane Fonda, Vanessa Redgrave, and various movie stars of our day, these happy dupes reward themselves for feeling superior to their own country, from which country they were free to travel, and to which they were free to return, while the smiling folk they visited were locked in slave states.

See also the brave actors who endeavored to boycott, and so close, the 2009 Toronto Film Festival because it offended by showing films from Israel.

This “visiting” and political pilgrimage differs from safari in that one does not here toy with danger. It more closely resembles the Victorian practice of “going among the poor.”

It used to be called “passing out tracts.”

The following is Dennis Prager’s interview of Senior Fellow at the Pepperdine University School of Public Policy, Bruce Herschensohn, about his latest book: An American Amnesia: How the US Congress Forced the Surrenders of South Vietnam and Cambodia. An excellent interview with two calls included.

And here is a longer dealing with myths surrounding Vietnam, via the indomitable Michael Medved:

Michael Medved (in this edited version of this Lie #1) talks to the reasons and history behind us entering the Vietnam war.

Here are three book recommends that re-influenced me (deprogrammed me) on Vietnam after owning and watching many years prior Time-Life’s VHS series on Vietnam:

Phillip E. Jennings served in Vietnam with the United States Marine Corps, flying helicopters, and in Laos as a pilot for Air America. He is the author of Nam-a-Rama and Goodbye Mexico, and won the Pirate’s Alley Faulkner Society first prize for fiction with his short story, “Train Wreck in a Small Town.” A successful entrepreneur, he is currently CEO of Molecular Resonance Corporation, which is developing technology to detect Improvised Explosive Devices. The book discussed is, “The Politically Incorrect Guide to the Vietnam War (The Politically Incorrect Guides)”