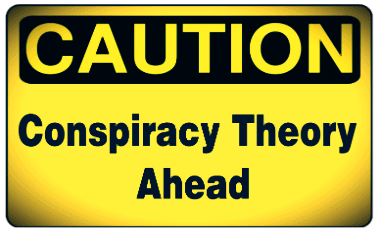 Before getting into these two evidences for a second shooter, I just want to say that yes, it is rare to have an act done in killing people without a clear motive. Typically the killers leave behind a manifesto that explains why they did it. In the case of the Vegas shooter, we have nothing yet. THAT BEING SAID, I do not need a manifesto from a person to know that they are incurably wicked. My guide to this and the next life make this abundantly clear. Mankind is depraved… able to do any wicked deed that comes across their hearts.

Maybe there were demonic forces influencing him. Maybe his anti-depressants brought out the real Stephen Paddock.

SIDE-NOTE — Most men struggle with two main issues that are natural to them: lust and anger. I have friend’s or know people who struggle greatly with sexual issues (lust, attraction, fidelity, etc.). Others struggle with anger… this is me. It runs in my Italian side of the family, and it is what my family had to see me deal with over many years. (Others battle both.) PIVOT — I have Multiple Sclerosis… and there are four drugs they recommend to help suppress it. I opted for the daily shot as it was least offensive to one’s body. The shot COMPLETELY changed my demeanor… all the gains I made over many years of maturing as a man and believer — out the door. As soon, and I mean within days of not using the inhibitor, I was back to normal. So my own experience with some of these more serious drugs makes the below ring true. I reacted to this mild medication, Copaxone, in the most extreme way – a very low percentile reaction.

Again, this is just anecdotal  meanderings by myself and others.

(My original statement) At this point we do not know. What I do know so far is that it looks like he has acted alone. So far. I am inclined to think he was a Leftie, and hated life. It is possible he target the event to kill the most Trump supporters possible. But all I have to go on is that there are pictures of him at a rally with a pink “pussy” hat on and some anti-Trump sign. And? Even I need more.

UPDATED INFO regarding Paddock being at an anti-Trump rally… to be fair, I want to debunk my own claim above. Here is SNOPES dealing with this:

…Here’s the best comparison we could create of photographs allegedly depicting the same man in these two different contexts:

Although these images are blurry, one can spot noticeable differences, such as the two men’s eyebrows (the accused gunman had light eyebrows, while the protester’s eyebrows are dark) and earlobes (the bottom of the gunman’s earlobes are attached, whereas the protester’s appear detached). Even if the man in pink was indeed the Las Vegas shooter, it would be nearly impossible to identify him from this photograph alone.

It’s as if conspiracy theorists simply searched for photographs of an anti-Trump protester who shared the shooter’s approximate age, race, and gender in order to push the narrative that the latter’s actions were politically motivated. In fact, another video purportedly showing the Las Vegas gunman at an anti-Trump rally identified an entirely different person:

Although this individual is also white, middle-aged, and male, there’s no evidence to suggest that he is the same man who committed the shootings….

OCCUPANT NEXT DOOR TO PADDOCK

So, this first conspiracy theory was an easy one to debunk. It came through my son via a buddy of his. Here is the evidence for a second shooter in Paddocks room, it comes from a blog:

An Australian man who was staying in the room next to the shooter in the Mandalay Bay has confirmed he witnessed multiple gunmen involved in the Las Vegas attack.

“There were multiple people dead and multiple shooters. I was just hiding waiting for police to come get us. I got outside safely and was hiding in bushes,” Brian Hodge told Australia’s Courier-Mail.

Mr. Hodge, who was staying in room 32134, next door to Stephen Paddock in room 32135, also provided important information when he revealed that a security guard was killed by police.

“My floor is a crime scene. They killed a security guard on my floor.”….

(See also the Washington [not so] Standard).

However, Mr. Hodges was not in his room, as THE DAILY MAIL and other outlets report:

…Mr Hodge is thankful that he was not in his room at the time police used controlled explosives to enter room 32134 and locate Paddock.

‘It was hardcore, like it was full machine-guns for 20 seconds and then it stopped for five seconds then it just went again,’ he said, describing how he hid in bushes outside of the hotel for more than three hours.

‘There were so many shots fired, I couldn’t tell you how many.’

Mr Hodge also described the terrifying moment a woman stepped in front of him and urged to turn back because there was a shooter….

…In fact, Hodge gave an interview to the Sydney Morning Herald in which he more fully describes what he saw.

Hodge told that newspaper that he never made it to his room on the 32nd floor and after hearing the bullets he first went to a casino kitchen before hiding in a bush outside.

“I was just laying on the ground. It was like a scene from a movie. The shooter was up above, we didn’t know where they were… I didn’t want anyone to know where I was, so I just curled up and hid. It was the most terrifying moment of my life.”

Hodge also posted on Facebook, “There is a live shooter with a gun in my hotel in Vegas right now, but I got outside safely and hiding in bushes.”

More importantly for this fact-check, it’s clear to us the Neon Nettle [a crazy conspiracy site that said it interviewed Hodges] post puts words in Hodge’s mouth. Hodge never said in the Courier Mail article nor in any other article or social media post that the security guard was a shooter…..

He also disputes ever saying “shooters” (multiple), or seeing a guard shot. Here is one response to a comment on his Facebook by someone noting the conspiracy theory (via Pundifact):

The second conspiracy deals with multiple windows looking as if they were broken on various floors, adding to thew suspicion of other shooters. This photo is starting to take off on the interwebs. Here is the PROOF of multiple shooters:

Even in this shot the taken day after the shooting you can see that the missing windows are on the opposite side of the building. And… so you know, no one died in the line of fire of those missing windows. If there were shooters in them, they were the worst shot ever!

During conversation about this on Facebook, someone posted a video to prove the position that there were multiple shooters. In fact, the opposite is done — it DISPROVES multiple shooters. Here I take the linked video and edit in the above points:

Bruh… this shit is gonna rot your brain.

In one of many refutations regarding World Trade Center number seven, I kept a video by an ex-truther regarding his final week in the movement. These dealt with similar windows. Here is how I prefaced the video on Facebook:

I have listened to the raw audio from the early uploads. It was one shooter. The echo from a gun firing would have been two or three for each bullet fired with massive delays due to the buildings in that vicinity. I also watched the video. Those windows being replaced were on opposite towers/sides than where Paddock was shooting into the crowd from. Last I checked no one was shot en mass on other streets or areas other than what his room over looked.

Edward Current was a long time 9/11 Truther and left the movement when he realized almost all the evidence for his position was founded on innuendo. The week he officially left he cobbled together a fake video and watched his allies go to town putting together elaborate stories surrounding it’s authenticity. A video of his explanation is found via my YouTube, and is explained more on my WTC-7 CONSPIRACY DEBUNKING PAGE.

Unfortunately, Info Wars and Prison Planet [e.g., Alex Jones] type crap is becoming somewhat popular (made all the more so by The Drudge Report and Paul Joseph Watson – who has some good commentary at times). All, one must keep in mind, based on innuendo.