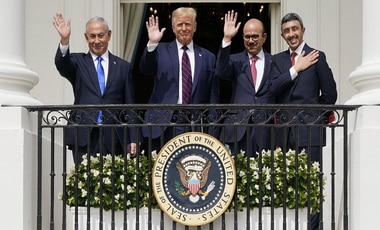 I am about to leave for the Santa Ynez area (wine baby!), so I will return to add to the description. Larry Elder leads up to the main topic, and that is, if Trump were a Democrat and got this deal done — the media would be falling over each other to discuss it in a positive light

Y-Net News reports that former International Atomic Energy Agency chief Mohamed ElBaradei, who had previously announced his intentions to run for the presidency of Egypt, said Monday that “if Israel attacked Gaza we would declare war against the Zionist regime.” They continue:

In an interview with the Al-Watan newspaper he said: “In case of any future Israeli attack on Gaza – as the next president of Egypt – I will open the Rafah border crossing and will consider different ways to implement the joint Arab defense agreement.”

He also stated that “Israel controls Palestinian soil” adding that that “there has been no tangible breakthrough in reconciliation process because of the imbalance of power in the region – a situation that creates a kind of one way peace.”

Discussing his agenda for Egypt, ElBaradei said that distribution of income between the different classes in Egypt would be his most important priority if he were to win the upcoming elections.

It looks as thought we are headed to some action in the Midlle-East, and Hamas may have gotten their hands on some chemical weapons:

Senior Libyan rebel “officers” sold Hizballah and Hamas thousands of chemical shells from the stocks of mustard and nerve gas that fell into rebel hands when they overran Muammar Qaddafi’s military facilities in and around Benghazi, debkafile’s exclusive sources report. The rebels offloaded an estimated 2,000 artillery shells carrying mustard gas and 1,200 nerve gas shells for cash payment amounting to several million dollars negotiated by Iran. The consignments may still be in Sudan en route for Lebanon and Gaza.

Any good news you ask? Saudi Arabia may be going head-to-head with Iran… if that is good news?