Both Google and Wikipedia attempt to hide the fact that Lincoln was a Republican by listing him as a member of the “National Union Party.” Is it true that Lincoln left the Republican Party to join some other party?

Now, I don’t know if this has changed within days… but Wiki is on their history [in this example] pretty well (graphic links to Wiki’s article on Abraham Lincoln, and the text is from their article on The National Union Party):

The National Union Party was the temporary name used by the Republican Party and elements of other parties for the national ticket in the 1864 presidential election that was held during the Civil War. For the most part, state Republican parties did not change their name.[1] The temporary name was used to attract War Democrats and border states, Unconditional Unionists and Unionist Party members who would not vote for the Republican Party. The party nominated incumbent Republican President Abraham Lincoln and for Vice President Democrat Andrew Johnson, who were elected in an electoral landslide.

Google however doesn’t “CYA” with the “(Republican)” after The National Union Party like Wiki: 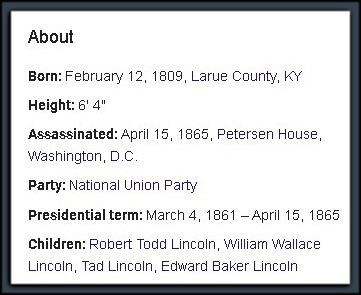 And here is a more humorous… although more true look at what our kids are being taught about Lincoln: