Okay, a few things and then the point.

In politics, apples are always compared to oranges because the outcome is usually what a politician is looking for. I will give two examples of this comparison and correct them.

During Bush’s last run, I heard a lot of politikal talk about Bush cutting veteran benefits by 2-million dollars. “Bush is putting these vets in the poor house, “ or, “Bush doesn’t care about the military veterans.” What is a person suppose to think if Bush is cutting 2-billion dollars out of veteran benefits? Well, as you can see from the graph below, this is merely a play on words/deeds. Bush was originally going to raise the benefits by almost 5-billion, but decided to trim the proposed increase for the next fiscal year by 2-billion. The opposing side took this decrease and used it as if Bush was actually cutting benefits, when in fact he was increasing them by 3-billion. In fact, as shown, Bush seems more compassionate about the veterans than do the opposing sides “cigar aficionado.” 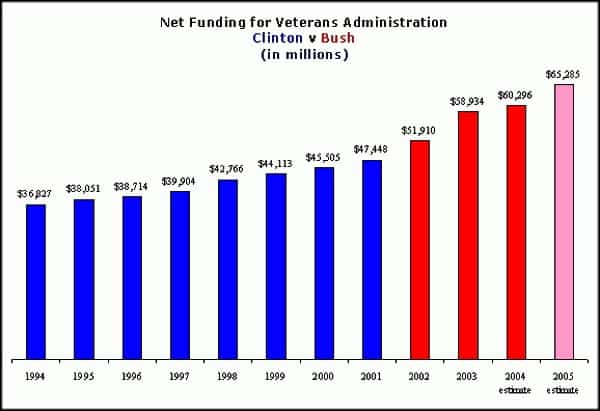 Very similar to the above examples of comparing apples and oranges, many make the same mistake with the deficit. Mind you, I do not support Bush’s spending habits, they are reminiscent of what Democrats always do when in office. Besides spending on the war on terror, I would take issue with much of Bush’s increases of spending on education, farm-subsidies, Medical spending, and the like. He’s a drunken sailor!

Take note that while the Democrats will take issue with Bush’s spending habits, they would spend more… this is a tactic to try and dissuade Bush’s fiscally conservative supporters from voting for him again (last election cycle) or to cause panic in our fiscally conservative base to vote for another “Ross Perot” so another “Clinton” can make it into office. Politics is about winning.

Even my critique of Bush is somewhat apples and oranges, what’s the truth? I will quote from an article that will explain the situation in a more apple vs. apple friendly manner (*as I am not an economist):

Over the next few weeks, the unveiling of new budget forecasts, as well as President Bushs budget proposal, will be followed by predictable, sky-is-falling coverage of the “record budget deficits” that threaten to force up interest rates and devastate the economy. Many people will say that only tax increases can avert this calamity.

America’s debt burden is actually below the post-World War II average. In fact, its lower than at any time during the high-flying 1990s…..

The misunderstanding flows from the obsessive focus on the budget deficit, which is not the proper measure of the debt burden. Here’s why: Suppose a family borrows $5, 000 this year. Are they carrying too much debt? Answering that question requires knowing how much debt the family is already carrying. If they owe $95, 000 from previous borrowing, then the additional $5, 000 is less affordable than if the family had no prior debt.

The family’s income also needs to be known. A debt of $100, 000 is easily manageable for Bill Gates, but not for many lower-income families.

The proper way to measure the impact of borrowing is to consider the total debt as a percentage of income. Banks use this “debt ratio” to determine how large of a loan families and business can afford. The same common sense applies to measuring the federal government’s finances. Last year’s $413 billion budget deficit says no more about Washington’s debt burden than the $5, 000 loan says about a family’s debt burden.

A better measure is the federal government’s debt ratio, calculated as the total federal publicly held debt as a percentage of Americas annual income (the gross domestic product). The current debt ratio — 38 percent — is actually below the post-World War II average of 43 percent. America’s debt burden is low by historical standards.

Heavy borrowing during World War II pushed the debt ratio up from 40 percent to 109 percent. Since then, it has typically ranged between 25 percent and 50 percent. The plummeting post-war debt ratio is no mystery: Economic growth has dwarfed the amount of new debt. Since 1946, inflation-adjusted federal debt has grown by 84 percent, while the economy has surged 429 percent. Just like a family with rising income can afford to buy a more expensive home and take on more mortgage debt, the growing American economy has been able to easily absorb its modest new debt.

This is especially true since 1994, a period in which the economy has grown six-times as fast as the federal debt. This kept the 2004 debt ratio lower than it was at any point in the 1990s.

So when we compare apples with apples, Bush comes out looking better than even his predecessor, Clinton. I always say: context, context, context! Whether in religious statements, or political, context is always key.