I mainly uploaded this blurb because of the updated birth rat in America. It was 2.1 a while back — now it is 1.7. Which…. I guess will replace in time a majority of the secular people with a more religious family oriented sub-set. However, the economy and our retiring population need money put into the system to get the monies promised them. But there is a lot of other stuff in here that is worth while (like some transgender realities as well). See more of the original Ben Shapiro excerpt on his YouTube channel. 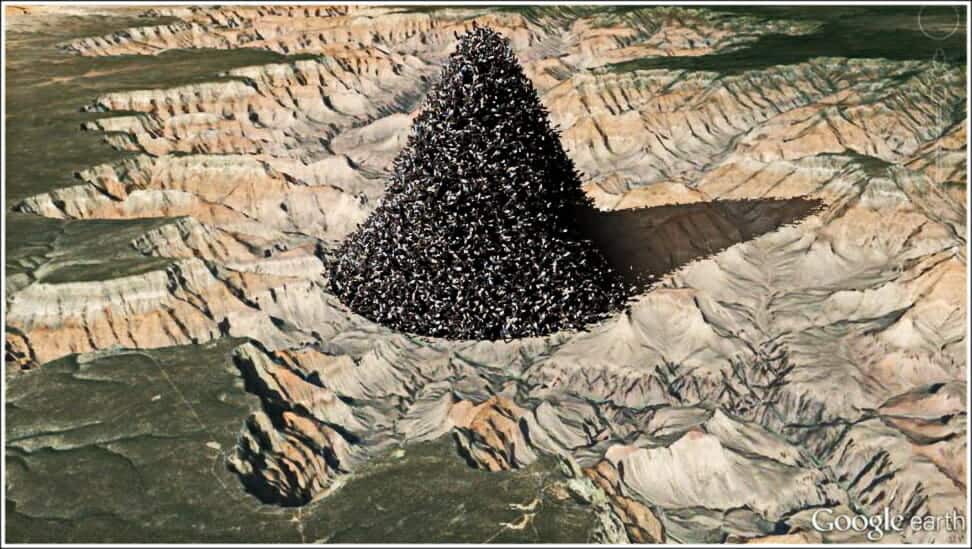 Both HUFFPO and THE DAILY MAIL discuss the above rendering, here is the opener:

If you took all the world’s population and dumped them into the Grand Canyon they wouldn’t fill a fraction of it.

In fact the 7.2 billion people would only form a comparatively tiny pile – as shown in this fascinating mock-up image.

The graphic was put together by respected YouTube presenter Michael Stevens on his Vsauce channel, which juxtaposes the population of the world alongside the famous deep canyon by the Colorado River – situated in Arizona…..

This post was inspired, by the way, because of a challenge posted on my Facebook. I will include some of the discussion from it as well as videos.

This is a statement made recently on my Facebook:

“Go forth and be fruitful.” I think mankind has been more than “fruitful”. Earth overpolulated. Birth control a no brainer, and I’m not not talking condoms.Nobody is “pro-abortion .The “pill” negligible in health care costs. Never should have let some companies opt out of the pill. Stone-agers…. I’m sure God loves watching 30,090 of his children starve to death every day. We are over-populated, despite the garbage that “study” foments. Great thing about the medieval era, they slaughtered folks by the thousands Genocide just part of “nation building” for the crown.

I will omit the name of the person out of respect in my response[s]:

We are not overpopulated? That is one of the dumbest things I hear from the left (hence, you). Firstly, children dying of starvation has N O T H I N G to do with overpopulation. Do you think it does?

Right now the world produces enough food for 10-billion people. [We have about 7.2 billion right now.] And every year we find new ways to produce, irrigate, and the like to produce even more. Why most children die of starvation in the world is because of regimes typically based on regimes either Islamic in nature of far-left (socialist, Communist, Marxist — for the most part they are not shining examples of the free-market).

I want you to especially respond to this question: where did you get your number from? That is, where are you getting your number 30,090 starve to death every day? I mean:

Example: If you put all 7 billion Earth Inhabitants in the State of Alaska, each person would have an average of 2,271.60 square feet of land. That area would be large enough to build a 4 bedroom house for each of the World’s 7 billion inhabitants!

You could also put all 7 billion inhabitants in nearly any of the World’s Nation States–except perhaps the smallest island or nation states–without running out of room. Any one of the four largest countries–after Russia–China, USA, Canada, and Brazil could provide more than 16,000 square feet per person. In USA, it would be 16,502 average square feet of land for each of the 7 billion world inhabitants if all moved to the NEARLY 100 Trillion square feet of land in the United States of America, excluding the US Territories.

My friend gave me this pat response:

Maybe in Utopia, Sean. Or Atlantis. Good luck with that. Too many man-made barriers. Put down your Bibles and come back to the real world. Idjets! [see note below] …. And let’s not even get into the starving and malnourished. God does not provide for all. There is more than enough food produced in the world to feed the world.

In later conversation the friend challenging me corrected his stats to 21,000 people dying of malnutrition/starvation per day.

However, it is primarily the Left who want more death versus less of it.They are the one’s worried about overpopulation.

It is the Left who blocks such things as Golden Rice, DDT, pushes bio-fuels which drives up food costs which affect the poor communities especially [etc, etc].

You should say in place of your “God does not provide for all” ~ “Government models do not provide for all” (referencing totalitarian governments who misuse state funds). Then Parents are next in line in the “not providing” line (parents spending money on drugs, alcohol, or gambling rather than the well being of their children).

That is a house and lot to make food. OR, spread those people out in one country and irrigation, food production, etc. are in full swing.

My friend wraps up his naked-emperor side of the discussion:

Let’s close this out. Water…..(1% of available water on this planet is freshwater. L.A. can’t even find enough water. And you guys are “semi-developed”. What are you going to do? Move everyone to Minnesota? Good luck!

I give a final response:

[No luck, just common sense] …desalination plants and not high-speed rail. If you believe the governments OFFICIAL reports and Al Gore… RICH greenies can build these so we could drink away the rise of the seas.

I could go on, but “overpopulation” is not the issue here.

Here is the side-note:

BTW, the Judeo-Christian construct [esp. the Christian theistic worldview] is the best worldview to operate from in order to search well for AND to test truth by. In ALL matter of faith and non-faith.

All 10,000 [+] religions in the world break down into just 7-worldviews (actually, most into three BIGGIES). The Judaic/Christian worldview is the most coherent model to form a working epistemology from. SO, I will N-O-T put my Bible down… thank you very much. My worldview responds to what every worldview should, except better than others:

1) Ultimate Reality ~ What kind of God, if any, actually exists?
2) External Reality ~ Is there anything beyond the cosmos?
3) Knowledge ~ What can be known, and how can anyone know it?
4) Origin ~ Where did I come from?
5) Identity ~ Who am I?
6) Location ~ Where am I?
7) Morals ~ How should I live?
8) Values ~ What should I consider of great worth?
9) Predicament ~ What is humanity’s fundamental problem?
10) Resolution ~ How can humanity’s problem be solved?
11) Past / Present ~ What is the meaning and direction of history?
12) Destiny ~ Will I survive the death of my body and, if so, in what state?