A dear friend when I sent this pic to a group responded (mostly joking… but maybe as a defensive shield for a way of protecting his own beliefs?) in a way that allowed me – from my DRACONUM PERCH — to opine. Noting the title of the book, he said: “Is it?” 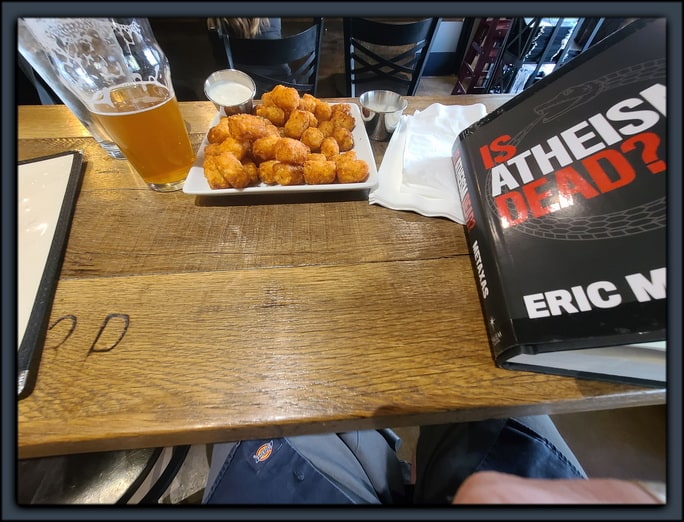 To which I texted back to the group:

It is a play off a 1966 Time magazine title, “God Is Dead.” Since then, the complexity of the simplest cell, DNA, the Big Bang, and the like, as well as conversions of well known atheist philosophers (Sartre, Camus, and Flew), and even the mainstream evolutionary field abandoning Natural Selection, have all but shown atheism to be dead. At least if you read, discuss important subjects (religion and politics), read history, and the like. Which is why my site is called “Religio-Political Talk.” For instance, the Big Bang is called that because the majority of atheists rejected it. Why? Because a beginning of the universe was a theistic position. And so, astronomer Sir Fred Hoyle used “big bang” in a derogatory sense, but the name stuck. And so from 1911 to this day, science has shown that Genesis aligns well with science. For instance, as one example:

And the “pope of atheism” changed his atheism based on the evidence from DNA:

But many, instead of testing their own beliefs, fill their mind and days with things that fill a void….

I added the Pascal quote to bring home the idea that knowing every stat about a particular player, team, or sport MAY not be — in the end — as important as bringing home the “bacon” to a life well lived. Aristotle said any animal can exercise practical reason in determining what to do to survive, but can an animal reason theoretically? Aristotle says no and that is what separates human beings from animals. To me — sports is a way to survive mundaneness. Deeper thinking about worldviews is worthy of higher order thinking, and add to the quality of a “life well lived.”

A “coherent worldview must be able to satisfactorily answer IN THE LEAST these four questions: that of origin, meaning, morality, and destiny.” It is never to late to expand one’s knowledge in these matter.