Dennis Prager reads from Fox News’ [and the original sources as well] article: “Oregon Promotes Teacher Program That Seeks to Undo ‘Racism In Mathematics‘”. The idea that Mathematics can be used to promote “equity” is older than this idea… see my, “Chicago Teachers Union President Politicizes Math“.

Some Comments via My Upload:

Read the POST-MILLENNIAL for more. You can also track where Critical Race Theory is taught in schools at CRITICALRACE.ORG. 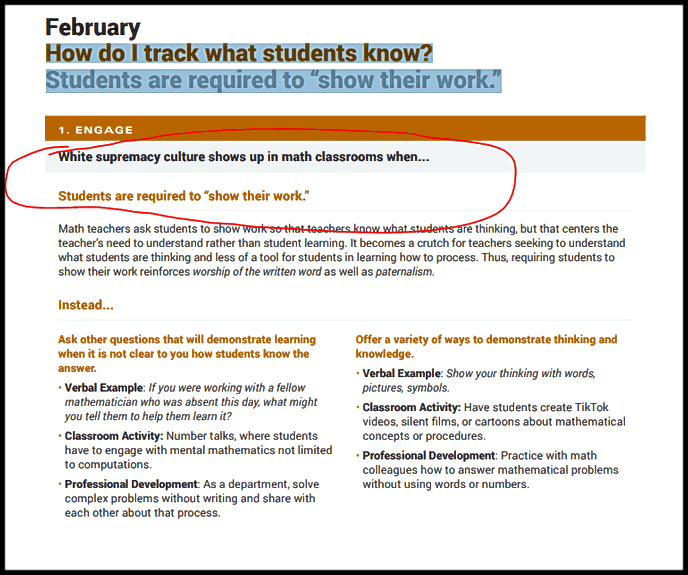 However, the best article I read so far on the topic is over at MISES INSTITUTE:

Rather than representing “white supremacy,” the evolution of mathematics has been a globe-, race-, and culture-spanning collaboration of advancements, an ongoing development of more effective tools for anyone to use. And that history shows that all of those involved wanted to get the answers right, where having to show your work has been a millennia-old strategy for mathematics education……

HOT AIR has some more hits via the racism of critical theory:

The San Francisco School Board has been in the news a lot recently. First it was controversy over the decision to rename 44 schools in the district. Then it was the decision to get rid of selective admissions at their best performing high school on the grounds that meritocracy is racist.

Over the weekend, the board took another hit in the pages of the San Francisco Chronicle when columnist Heather Knight relayed the story of a volunteer who wanted to become part of the board’s Parent Advisory Committee. Seth Brenzel would have been the only gay member of the group and the only man, but after discussing it for two solid hours the school board rejected him because he’s white:

All of the 10 current members are straight moms. Three are white. Three are Latina. Two are Black. One is Tongan. They all want the dad to join them.

The seven school board members talk for two hours about whether the dad brings enough diversity. Yes, he’d be the only man. And the only LGBTQ representative. But he’d be the fourth white person in a district where 15% of students are white…

The Alice B. Toklas LGBTQ Democratic Club on Friday slammed the board for its “misguided fumbling towards a goal of diversity.”

The person who was perhaps the most stunned was Seth Brenzel, the gay dad whose daughter is a fourth-grader at Glen Park Elementary. “At any moment, I expected a commissioner to address me,” he said, “because there I was.”

The board never asked Brenzel a single question. Instead he sat there, his face being broadcast on the zoom meeting, while the board decided he didn’t belong in the voluntary position because a white male ticked the wrong social justice boxes. This important conversation dragged on while about 500 parents were waiting to hear about school reopening plans.

The board’s focus on woke decision making over addressing actual problems has become so absurd that even some Democrats see it as self-parody:

“We’ve become parodies of ourselves,’’ said Democratic strategist Brian Brokaw, who recounted Republican friends good-naturedly jabbing him as the developments became a running joke on the political scene. “It’s counterproductive in so many ways.”

San Francisco parents and their kids are paying a steep price for electing these woke ideologues to the school board.

Oregon to Ban Employers From Asking About Felonies: A statewide “Ban the Box” effort is underway which will prohibit employers from asking dangerous felons about their criminal records on job applications.