(I assume this is a whistleblower Democrats don’t like.) BMJ listens to evidence from whistleblower over the Pfizer vaccine trial.

In autumn 2020 Pfizer’s chairman and chief executive, Albert Bourla, released an open letter to the billions of people around the world who were investing their hopes in a safe and effective covid-19 vaccine to end the pandemic. “As I’ve said before, we are operating at the speed of science,” Bourla wrote, explaining to the public when they could expect a Pfizer vaccine to be authorised in the United States.

But, for researchers who were testing Pfizer’s vaccine at several sites in Texas during that autumn, speed may have come at the cost of data integrity and patient safety. A regional director who was employed at the research organisation Ventavia Research Group has told The BMJ that the company falsified data, unblinded patients, employed inadequately trained vaccinators, and was slow to follow up on adverse events reported in Pfizer’s pivotal phase III trial. Staff who conducted quality control checks were overwhelmed by the volume of problems they were finding. After repeatedly notifying Ventavia of these problems, the regional director, Brook Jackson, emailed a complaint to the US Food and Drug Administration (FDA). Ventavia fired her later the same day. Jackson has provided The BMJ with dozens of internal company documents, photos, audio recordings, and emails.

In her 25 September email to the FDA Jackson wrote that Ventavia had enrolled more than 1000 participants at three sites. The full trial (registered under NCT04368728) enrolled around 44 000 participants across 153 sites that included numerous commercial companies and academic centres. She then listed a dozen concerns she had witnessed, including:

Within hours Jackson received an email from the FDA thanking her for her concerns and notifying her that the FDA could not comment on any investigation that might result. A few days later Jackson received a call from an FDA inspector to discuss her report but was told that no further information could be provided. She heard nothing further in relation to her report.

In Pfizer’s briefing document submitted to an FDA advisory committee meeting held on 10 December 2020 to discuss Pfizer’s application for emergency use authorisation of its covid-19 vaccine, the company made no mention of problems at the Ventavia site. The next day the FDA issued the authorisation of the vaccine.8

In August this year, after the full approval of Pfizer’s vaccine, the FDA published a summary of its inspections of the company’s pivotal trial. Nine of the trial’s 153 sites were inspected. Ventavia’s sites were not listed among the nine, and no inspections of sites where adults were recruited took place in the eight months after the December 2020 emergency authorisation. The FDA’s inspection officer noted: “The data integrity and verification portion of the BIMO [bioresearch monitoring] inspections were limited because the study was ongoing, and the data required for verification and comparison were not yet available to the IND [investigational new drug].”

In recent months Jackson has reconnected with several former Ventavia employees who all left or were fired from the company. One of them was one of the officials who had taken part in the late September meeting. In a text message sent in June the former official apologised, saying that “everything that you complained about was spot on.”

Two former Ventavia employees spoke to The BMJ anonymously for fear of reprisal and loss of job prospects in the tightly knit research community. Both confirmed broad aspects of Jackson’s complaint. One said that she had worked on over four dozen clinical trials in her career, including many large trials, but had never experienced such a “helter skelter” work environment as with Ventavia on Pfizer’s trial.

“I’ve never had to do what they were asking me to do, ever,” she told The BMJ. “It just seemed like something a little different from normal—the things that were allowed and expected.”

She added that during her time at Ventavia the company expected a federal audit but that this never came.

After Jackson left the company problems persisted at Ventavia, this employee said. In several cases Ventavia lacked enough employees to swab all trial participants who reported covid-like symptoms, to test for infection. Laboratory confirmed symptomatic covid-19 was the trial’s primary endpoint, the employee noted. (An FDA review memorandum released in August this year states that across the full trial swabs were not taken from 477 people with suspected cases of symptomatic covid-19.)

“I don’t think it was good clean data,” the employee said of the data Ventavia generated for the Pfizer trial. “It’s a crazy mess.”

A second employee also described an environment at Ventavia unlike any she had experienced in her 20 years doing research. She told The BMJ that, shortly after Ventavia fired Jackson, Pfizer was notified of problems at Ventavia with the vaccine trial and that an audit took place.

Since Jackson reported problems with Ventavia to the FDA in September 2020, Pfizer has hired Ventavia as a research subcontractor on four other vaccine clinical trials (covid-19 vaccine in children and young adults, pregnant women, and a booster dose, as well an RSV vaccine trial; NCT04816643, NCT04754594, NCT04955626, NCT05035212). The advisory committee for the Centers for Disease Control and Prevention is set to discuss the covid-19 paediatric vaccine trial on 2 November.

The research, published in the journal Nature Medicine, used data from Japan, where each municipality is responsible for the closure of schools in their areas.

…”Empirically, we find no evidence that school closures in Japan caused a significant reduction in the number of coronavirus cases,” they said.

…Separate research, published earlier this year, found the UK had closed schools for longer than anywhere in Europe other than Italy over the past 18 months. 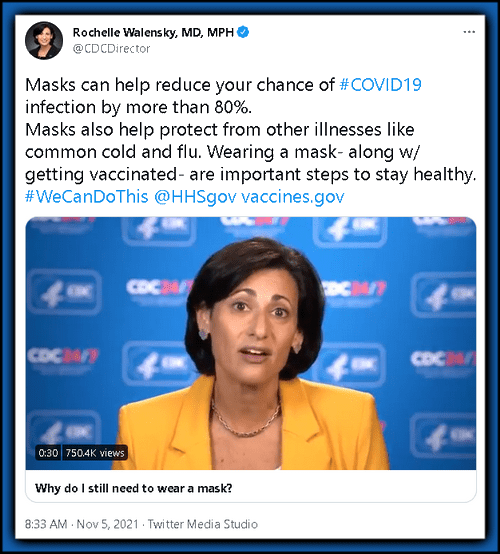 ….Kyle Lamb, a data researcher for Republican Gov. Ron DeSantis of Florida, the state with the lowest rate of COVID infection, took issue with Walensky.

“There is not a single study in the entire world that has been produced during the pandemic, or especially before, that shows masks reduce infections by 80%,” he said on Twitter.

“This is the most comically bad misinformation I have ever seen. CDC has been reduced to outright lies.”

Yale Law School professor Samantha Godwin said the CDC director has made “a specific empirical claim for which no data exists.”

Dr. Jay Bhattacharya, an epidemiologist at the Stanford University School of Medicine, noted everyone is “dunking on” Walensky’s “preposterous tweet about mask efficacy.”

“But it’s an improvement since last year when the former CDC director said masks were better than vaccines,” he said, referring to Dr. Robert Redfield. “At this rate, they’ll get it right in 2050 or so.”

The CDC’s stance on masks has changed since the beginning of the pandemic.​ In March 2020, the agency said masks “are usually not recommended” in “non-health care settings.”

The same month, the World Health Organization recommended people not wear face masks unless they are sick with COVID-19 or caring for someone who is sick. Dr. Mike Ryan, executive director of the WHO health emergencies program, said in March 2020 that there “is no specific evidence to suggest that the wearing of masks by the mass population has any potential benefit.

“In fact, there’s some evidence to suggest the opposite in the misuse of wearing a mask properly or fitting it properly,” he said.

Similarly, in a March 2020 interview with “60 Minutes,” White House coronavirus adviser Dr. Anthony Fauci warned of “unintended consequences,” saying there’s “no reason to be walking around with a mask” in “the middle of an outbreak.”

In May 2020, a CDC study on the use of measures such as face masks in pandemic influenza concluded “evidence from 14 randomized controlled trials of these measures did not support a substantial effect on transmission.”

Fauci and others argue the science has evolved. However, a study earlier this year by the University of Louisville was among many that found that state mask mandates did not help slow the spread of COVID-19. A CDC study in October 2020 indicated that Americans were adhering to mask mandates, but the requirements didn’t appear to have slowed or stopped the spread of the coronavirus. And further, it found, mask-wearing has negative effects. The Association of American Physicians and Surgeons has compiled a page of “Mask Facts” showing that the consensus prior to the coronavirus pandemic was that the effectiveness of mask-wearing by the general public in slowing the spread of a virus is unproven, and there’s evidence it does more harm than good.

Denmark, Norway and Sweden are among the many European nations not requiring masks for school children. Norway has never recommended face masks for schools, and the Norwegian Institute of Public Health explicitly advises against masking primary school-aged children. In Sweden, masks are no longer recommended on public transit, even at rush hour.

In most of the United Kingdom, the New York Times reported, elementary school children and their teachers were not required to wear masks during the delta surge there earlier this year.

A study of masked German schoolchildren published June 30 in the Journal of the American Medical Association Pediatrics found carbon dioxide content in “inhaled air” was at least three-fold higher than German law allows. Complaints by children regarding mask-wearing registered in a German database included irritability, headache and reluctance to go to school. The JAMA paper cited the “dead-space volume of the masks, which collects exhaled carbon dioxide quickly after a short time.”

An analysis published in Nature magazine found that N95 masks do offer some protection from airborne viral diseases, but the common surgical mask, which has holes bigger than the SARS-CoV-2 virus, loses any efficacy after about 20 minutes because of the buildup of vapor from breathing…..