Keep in mind as you read… that there is a growing anti-Christian sentiment on the left. This attack is switching towards even the Reformational view of “saved by grace.” No… I am not kidding:

In the wake of the November 27th shootings at Planned Parenthood, media interest has centered around what the New York Times calls gunman Robert Dear’s “idiosyncratic” religious beliefs. In a 1993 affidavit, Dear’s ex-wife Barbara Micheau described him as someone who “claims to be a Christian and is extremely evangelistic, but does not follow the Bible in his actions…He says that as long as he believes, he will be saved.”

Dear’s vision of grace—salvation through faith alone, independent of moral or immoral action—may well seem distasteful to many Times readers. But is it “idiosyncratic?” Hardly. In fact, the notion that salvation can—and must—be obtained purely by the grace of God and faith in God’s mercy, rather than by anything an individual does (or does not) do, is among the issues at the heart of the division between the Protestant and Catholic Christian traditions. Dear’s actions may seem reprehensible to Christians and non-Christians alike, but his understanding of salvation is very much in keeping with the American evangelical tradition.

Is there something quintessentially American about this view of sin and grace? Timothy Smith certainly thinks so. It contributed to a wider sense among Christian theologians that a focus on grace—rather than acts—was essential for Christianity’s survival within this new America. As he writes:

“Like the founding fathers of the nation, [early American theologians] were keenly aware of the threat that in a free society the masses of ordinary persons, including the great company of church people, would make their political and economic and social choices in response to greed or the love of power, pleasure, and public esteem. … Grace alone, they believed, could purify the inner springs of character and so make possible the creation of a righteous society; and that grace came in the sanctifying fullness of the Holy Spirit.”

While Dear’s actions may be horrific and aberrant, to dismiss his theology as purely “idiosyncratic” is to overlook a vast body of grace-centered religious language in the American tradition: a tradition that has come to shape the contours of American evangelicalism today.

Robert Lewis Dear, Jr., thought of himself as a Christian, according to his ex-wife.

“He claims to be a Christian and is extremely evangelistic, but does not follow the Bible in his actions,” Barbara Micheau said in a divorce court document, according to the Times.

I have been in the Evangelical faith for a better part of my life — [dramatic pause] — and I know of no pastor that subscribes to a faith that one can do whatever one pleases and you remain in the faith. Dumb!

The press is portraying the Reformation and it’s understanding of “by grace alone/by faith alone” as a root cancer in people having a religious “stamp of approval” ~ by God no less ~ to commit acts of terrorism… as will be explained in more-depth further below when a major newspaper equates a Messianic Jew to ISIS loving Muslims. This new narrative plays into the hands of the PC crowd and the newer “white priveledge” aspect of the Founding Fathers and WASPs (White Anglo-Saxon Protestant). 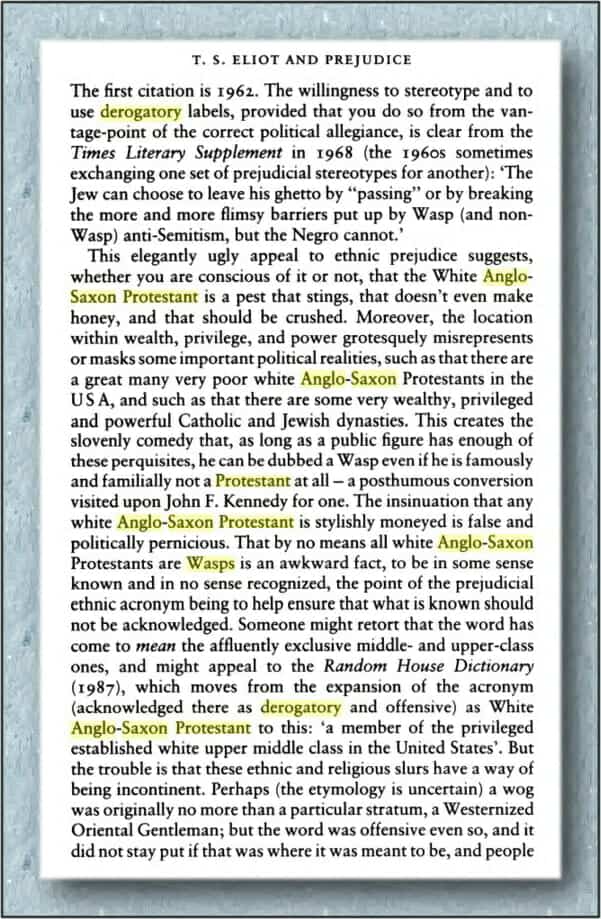 Here, the Red Letters Dialogues delves into the narrative that is now attacking “fundamentalists” in a decent half-hour podcast talking about how the Evangelical Christian is under attack… by the media AND the Pope!

Likewise, at the end of Macho Sauces’s video [below]… Zo makes this point as well, that “somehow us right-wingers with our guns and our Bibles are the real threat”

Commenting deeper on this narrative Alfonzo hinted at (the left “blaming” Christians for violence), here are two article I found informative. First, if you want to see how far down the rabbit trail the left goes, read no further than NewsBusters expose:

….Ever since the deadly shooting in San Bernardino, Calif., last Wednesday, several members of the media have tried to spread the blame from the “radicalized” Muslim couple who shot and killed more than a dozen people to other individuals who are “just as bigoted” as the murderers.

One of those people in the media is columnist Linda Stasi of the New York Daily News, who wrote in a Dec. 6 article asserting that the interaction between “two hate-filled, bigoted municipal employees” led to the deaths of “13 innocent people” who were killed in an act of “unspeakable carnage.”

The post’s title read: “San Bernardino Killers Were ISIS-Loving Monsters — But One of Their Victims Was Just as Bigoted.”

The column drew a fiery reaction from Soopermexican of the Right Wing Scoop website, who called Stasi a “foul, disgusting liberal” and branded her column “quite alarming.”

The other man quietly stewed and brewed his bigotry, collecting the kind of arsenal that the Facebook poster would have envied.

“What they didn’t realize,” she stated, “is that except for their different religions, they were in many ways similar men who even had the same job.”

One man, “the Muslim, was a loser who had to travel all the way to Pakistan to get himself an email bride,” Stasi wrote while refusing to add to their fame by “using the killer and his murderous wife’s names.”

The other man, the victim — Nicholas Thalasinos — was “a radical Born Again Christian/Messianic Jew who also connected with his future wife online and had traveled across the country to meet her,” Stasi noted.

“The killer, however, became half of an ‘Islamic Bonnie and Clyde’” who “deserve every disgusting adjective thrown at them,” she charged. “And more.”

“But the victim is also inaccurately being eulogized as a kind and loving religious man,” Stasi stated.

Make no mistake: As disgusting and deservedly dead as the hate-filled fanatical Muslim killers were, Thalasinos was also a hate-filled bigot. Death can’t change that.

But in the U.S., we don’t die for speaking our minds. Or we’re not supposed to anyway.

Referring to Stasi, Soopermexican claimed that “this is just unbelievably foul of her. And it really makes you wonder what she thinks should be done to conservatives who think like he did, if she’s equating him to an evil, murderous ISIS-sympathizing terrorist that the police rightfully shot down in the street like a dog.”

“Now in no way am I saying her free speech should be shut down,” the Right Scoop poster continued. “I want people to see how stupid and wretched liberals are. BUT her point of view should be relegated to the fever swamps of the fringe Internet like Twitter or Tumblr, not legitimized in the pages of a professional publication.”

Mind you… there are some crazy views on this shooting (and other shootings), but as I see it, the above referenced piece by Linda Stasi of the Daily News is *JUST AS CRAZY* (*Booming Bass-Filled Echo Affect*).

Here is the narrative — in your face! Take note of the pro-life families included in a video about “terrorism”

LIKEWISE, the Left and the Media have gotten their panties in the bunch over what they deem as “Christian Terrorism” in the Robert Lewis Dear. In an EXCELLENT Charisma magazine article, Matt Barber — after going through the percentage of Islamist’s in the Muslim faith and comparing that to the world population — he continues on into the “moral equivalency” of the piece:

…it’s no surprise that there have been nearly 27,500 terrorist attacks worldwide committed by faithful Muslims since 9/11.

There have been zero committed by faithful Christians.

Muslims, true Muslims, follow the teachings of their dead “prophet” Muhammad, a warring tyrant who, as even the Islamic Quran concedes, was a murderous misogynist and pedophile. Christians, true Christians, follow the very-much-alive Lord Jesus Christ, the God-man, whose teachings are found in the God-breathed Holy Bible.

Muhammad taught, and the Quran stresses, that a central tenet of Islam is to convert, enslave or kill the infidel. An infidel is anyone who is not Muslim or, depending on who’s doing the killing, belongs to a different sect of Islam.

On the other hand, Jesus taught His followers, who are called Christians, to “do to others what you would have them do to you” (see Luke 6:31); that, “You shall not murder” (see Matthew 19:18); and that we are to “love [our] enemies and pray for those who persecute [us]” (see Matthew 5:44). It goes without saying that those who do not follow these teachings are not following Christ.

Indeed, while many may claim to be “Christian,” the word only applies to those who are justified in Christ, spiritually reborn and regenerated through the supernatural work of the Holy Spirit. The true Christian walks in Christ’s steps through faith and obedience.

Terrorism is in direct disobedience to Christ.

Which brings us to last week’s mass shooting near an abortion slaughterhouse in Colorado Springs, Colorado. Even as the secular left was gleefully screaming, “Christian terrorism!” Garrett Swasey, a pro-life, Christian pastor and police officer, was laying down his life for those inside the very Planned Parenthood he abhorred.

It’s what Christians do.

Still, again, and so our liberal, anti-Christian friends fully understand, Officer Garrett Swasey was a pro-life Christian. Robert Dear, the evil, reclusive, deranged pothead who killed him, is not. Dear murdered three innocent people. He is, by definition, not “pro-life.” Neither is he Christian. He is, much like Planned Parenthood, “pro-death.”

To be sure, pro-life Christians like Officer Swasey agree: Murdering babies is wrong. And murdering the murderers who murder babies is also wrong. Shooting innocent people is evil. Just like dismembering babies and selling their body parts is evil.

Yes, there have been terrorists who call themselves Christian.

But there has never been a Christian terrorist.

The Godfather of Politics notes how the media would portray the well known atheist, Dan Barker, if he were to commit an “act of terrorism:

…Let’s suppose that Mr. Barker decides to commit a terrorist act. How might the headline read?:

Given Mr. Barker’s logic, this would be an appropriate description. But, of course, it wouldn’t be true.

It’s not what a person is on paper that counts; it’s what they actually practice and identify with in their terrorist acts that matter.

Consider Eric Rudolf, the “Olympic Park Bomber,” … Rudolf wrote the following in an undated letter that was published in the July 6, 2005 issue of USA Today:

Many good people continue to send me money and books. Most of them have, of course, an agenda; mostly born-again Christians looking to save my soul. I suppose the assumption is made that because I’m in here I must be a ‘sinner’ in need of salvation, and they would be glad to sell me a ticket to heaven, hawking this salvation like peanuts at a ballgame. I do appreciate their charity, but I could really do without the condescension. They have been so nice I would hate to break it to them that I really prefer Nietzsche to the Bible.”

We are ALL sinners, and need God’s Divine Grace → to rule our faith. If that makes me a terrorist… then so be it.