(ORIGINALLY POSTED IN MAY OF 2010, FIXED MEDIA)

Mosab Hassan Yousef was born in Ramallah, in the Palestinian West Bank in 1978. His father, Sheikh Hassan Yousef, is a founding leader of Hamas, internationally recognized as a terrorist organization and responsible for countless suicide bombings and other deadly attacks against Israel. Yousef was an integral part of the movement, for which he was imprisoned several times by the Shin Bet, the Israeli intelligence service. He withstood torture in prison only to discover Hamas was torturing its own people in a relentless search for collaborators. He began to question who his enemies really were–Israel? Hamas? America? While in an Israeli prison, Yousef was approached about becoming a spy for the Shin Bet. Initially, Yousef accepted it with the idea that he would betray them and in hopes he could use the role to protect his father and family. Later, as Yousef saw the hypocrisy within Hamas and became a Christian, he used the position to save lives on both sides of the conflict. Yousef worked as a double agent within Hamas for nearly 10 years. He became a vital intelligence asset for the Israeli government while Yousef served side-by-side with his father within the upper ranks of Hamas. After a chance encounter with a 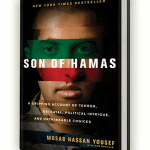 British tourist, Yousef started a six-year quest that jeopardized Hamas, endangered his family and threatened his life. He has since embraced the Christian faith and sought political asylum in America. His story was revealed in the 2008 Fox News documentary “Escape from Hamas.” Yousef ‘s first book Son of Hamas, written with Ron Brackin (SaltRiver), releases March 2, 2010. In Son of Hamas, Yousef reveals new information about this dangerous terrorist organization and unveils the truth behind his own secret role. He describes his surreal journey to a new faith that instructed him to love his enemies. And he tells the story of the agonizing decisions that led him to walk away from his family, friends and homeland. For blog updates from Yousef, visit AMAZON

(Caroline’s Book: The Israeli Solution: A One-State Plan for Peace in the Middle East)

There is a conversation going on elsewhere on the “InterWeb,” that is giving me an opportunity to import some information from a previous post on my old blog in mid-2009 regarding Arab/Muslim terror. Here is the statement I wish to address with history:

i. “Ancient History” (really, the newest world religion on the scene);

ii. or to Modern History.

This statement just is not true. I will mention some past history first, then dive into more modern Zionism.

…OKAY… FIRSTLY… out of the worlds “World Religions” Islam holds the distinction of being founded by a terrorist. Muhammad personally dug graves for men, women, and children he likewise assisted in slitting the throats of and “marrying” off (sex-slaves) female children to his men. Remember, Muhammad married a 6-year old and consummated that marriage when she was nine-years old.

He instructed his followers to lie, to kill satirical poets (today known as stand up comedians) for speaking negatively of him. Orders to steal and thieve, rape and pillage, were the norm — as well as making treaties with the knowledge that they would be broken when Muhammad’s forces were stronger. You can see a a handout I made for a adult Sunday School class (linked in pic to right).

There is also this history relating to terror in the caliphates from Robert Spencer and Bill Warner. First Robert, then the video by Bill:

The Third Crusade (1188-1192). This crusade was proclaimed by Pope Gregory VIII in the wake of Saladin’s capture of Jerusalem and destruction of the Crusader forces of Hattin in 1187. This venture failed to retake Jerusalem, but it did strengthen Outremer, the crusader state that stretched along the coast of the Levant.

The almost Political Correct myth is that the crusades were an unprovoked attack by Europe against the Islamic world are dealt with in part:

Brutal subordinations and violence became the rules of the day for Christians in the Holy Land. In 772, the caliph al-Mansur ordered the hands of Christians and Jews in Jerusalem to be stamped with a distinctive symbol. Conversions to Christianity were dealt with particularly harshly. In 789, Muslims beheaded a monk who had converted from Islam and plundered the Bethlehem monastery of Saint Theodosius, killing many more monks. Other monasteries in the region suffered the same fate. Early in the ninth century, the persecutions grew so severe that large numbers of Christians fled to Constantinople and other Christians cities. More persecutions in 923 saw additional churches destroyed, and in 937, Muslims went on a Palm Sunday rampage in Jerusalem, plundering and destroying the Church of Calvary and the Church of the Resurrection.

More on this can be found in at my The Crusades vs. The Three Caliphates (Moral Equivalence)

Before continuing however, here are some recomended books from my book shelf… click to enlarge:

Besides the myth that the “Palestinians” are being displaced (see many presentations of the myths surrounding modern-day Israel HERE), the myth that “Zionism” perpetrated terror prior to “Hamas” or the Arab-Muslims is simply a false narrative. For instance… here are terror attacks by Muslims BEFORE the first Irgun (Jewish extremist) attack ~ again, click to enlarge:

Nor are these attacks warranted on the typical Leftist drivel… and this is only a decade of examples:

So, the contention that Jewish extremism or foreign policy or removing a non-existent people from one-place to another just does not comport with the historical evidence. Not only that, but similar “evictions” of the “Palestinians“‡ do not garner U.N. attention nor the attention of the media, as is explained here:

Much has been made of the Palestinian exodus of 1948. Yet during their decades of dispersal, the Palestinians have experienced no less traumatic ordeals at the hands of their Arab brothers. As early as the mid-1950s, Iraq, Saudi Arabia, and Libya expelled striking Palestinian workers. In 1970, Jordan expelled some 20,000 Palestinians and demolished their camps; in 1994-95, Libya expelled tens of thousands of long-term Palestinian residents in response to the Oslo process; and after the 2003 Iraq war, some 21,000 Palestinians fled the country in response to a systematic terror and persecution campaign. As recently as 2007, Beirut effectively displaced 31,400 Palestinian refugees when the Lebanese army destroyed the Nahr el Bared refugee camp during fighting between the militant Fatal al-Islam group and the Lebanese army.

But the largest forced displacement of Palestinians from an Arab state took place in 1991 when Kuwait expelled most of its Palestinian residents in retaliation for the Palestine Liberation Organization’s (PLO) endorsement of Iraq’s brutal occupation of the emirate (August 1990-February 1991). It mattered little that this population, most of which had resided in Kuwait for decades, was not supportive of the PLO’s reckless move: From March to September 1991, about 200,000 Palestinians were expelled from the emirate in a systematic campaign of terror, violence, and economic pressure while another 200,000 who fled during the Iraqi occupation were denied return. By September 1991, Kuwait’s Palestinian community had dwindled to some 20,000.

Yet while this expulsion was near the order of magnitude of the Palestinian 1948 flight (estimated by the Israeli government at 550,000-600,000 and by the Arab League at 700,000), driving PLO chairman Yasser Arafat to declare that “what Kuwait did to the Palestinian people is worse than what has been done by Israel to Palestinians in the occupied territories,” it was largely ignored by the international community with neither the U.N. Security Council nor the General Assembly doing anything to assist the newly displaced refugees and punish their ethnic cleanser….

‡ “An Invented People” — The Jamie Glazov Show w/Daniel Pipes and David Meir-Levi (there can be no two-state solution, BTW):