…or that making burritos is racist… the Left changes the meaning of them for political gains or the racializes them to malign their opponents. If not that, they make up entirely new words from whole cloth or damage the grammar of the Romantic Languages or English itself.

Now…. “peaceful and Patriotic” is inciteful. That now means to pillage and destroy.

(YouTube Channel’s description) As a viewer from across the pond in the UK, I was amazed by the scenes at Capitol Hill and the media coverage. What confused me was why are none of the media organisations not showing this clip, but showing edited clips with the words PEACEFULLY & PATRIOTICALLY omitted… How are the words “PEACEFULLY & PATRIOTICALLY” an “INCITEMENT TO INSURRECTION”?

[ANSWER to my compatriot across the pond: Democrats] 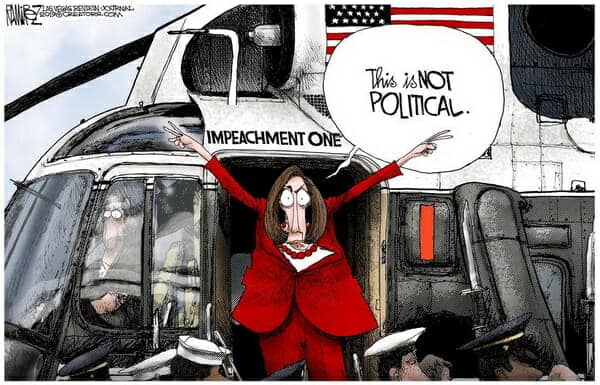 Here I wish to reproduce in it’s entirety a letter to the editor of a small Indianola (Iowa) paper. I am doing so just in case it is removed to keep the paper’s server’s free of space.

The House of Representatives has, for a second time, engaged in a lawless and irrational impeachment of President Trump. This snap impeachment, after only two hours of debate, without any investigations, hearings or any due process, where the President’s counsel would be allowed to present evidence and cross-examine witnesses, is as lawless as the invasion of the Capitol, albeit less violent.

It is based on the lie that President Trump incited the criminal invasion of the Capitol.

Obviously, they planned an attack long before Trump spoke.

The rioters could not have been “incited” by the President because they probably heard little or none of his speech. The President’s speech lasted from 12:00 p.m. to 1:11 p.m. According to Chief Sund, the assault on Capitol police started at 12:40 p.m. According to Bing, under normal conditions, it takes 32 minutes to walk from the Ellipse to the Capitol. This means the rioters had to leave no later than 12:08 p.m. On January 6th, however, due to crowds, it took 45 minutes to make that walk. This means the rioters had to leave the Ellipse, if they were ever there, by 11:55 p.m, before the President’s speech started.

Even if they had heard the speech, President Trump never called for force, violence, or overthrow of government. He made only the following comments on the Capitol:

“We’re going walk down to the Capitol, and we’re going to cheer on our brave senators, and congressmen and women. We’re probably not going to be cheering so much for some of them because you’ll never take back our country with weakness. You have to show strength, and you have to be strong.

“We have come to demand that Congress do the right thing and only count the electors who have been lawfully slated, lawfully slated. I know that everyone here will soon be marching over to the Capitol building to peacefully and patriotically make your voices heard.”

To impeach a President based on his asking his supporters for a peaceful march to the Capitol in order to “make your voices heard,” violates the First Amendment guarantees of freedom of speech and assembly.

The President’s critics have ignored his call for peaceful demonstration. They have quoted, out of context, his statement made not two minutes before the end of his speech, when no rioters could have been there to hear them, that, “And we fight. We fight like Hell and if you don’t fight like Hell, you’re not going to have a country.”

In fact, just as Obama stated that Democrats should bring a gun to a knife fight, the President repeatedly used “fight” to refer to “fighting” in the legislatures, courts, elections and in the media. He referred to Jim Jordan fighting in Congress. Did he mean that Jordan was punching his colleagues? Did Obama mean that Democrats should engage in knife fights with Republicans but use a gun to win?

As for the President controlling the rioters, the Washington Post reported that, “’4:30: Outside the east side of the Capitol, a man with a megaphone announced to a crowd of hundreds: ‘Hey, everyone, Donald Trump says he wants everyone to go home.’ In response, some in the crowd booed loudly.

The impeachment is a lawless and irrational abuse of power.

Which brings me to a REASON.ORG article that I read that was helpful…

….Citing unnamed “officials,” the Times reports that Trump “was initially pleased” when some of his supporters “stormed into the Capitol” and that he “disregarded aides pleading with him to intercede.” But about 20 minutes after the demonstration turned violent, Trump urged his supporters to “stay peaceful.” Half an hour later, he reiterated that message: “I am asking for everyone at the U.S. Capitol to remain peaceful. No violence! Remember, WE are the Party of Law & Order—respect the Law and our great men and women in Blue.” Later that day, he recorded a message urging the protesters to “go home now,” saying “we have to have peace,” even while continuing to insist that “we had an election that was stolen from us.”

Trump did not advocate violence, even in general terms. If his remarks qualify as incitement to riot, so would similarly fiery rhetoric at other protests that are marked by violence.

In 2016, a Baton Rouge police officer who was injured during a Black Lives Matter demonstration sued one of the movement’s leaders, DeRay Mckesson, saying he “incited the violence.” A federal judge dismissed the lawsuit after concluding that Mckesson “solely engaged in protected speech” at the protest. The U.S. Court of Appeals for the 5th Circuit later revived the lawsuit, but its decision focused on the allegation that Mckesson “directed the demonstrators to engage in [a] criminal act” by blocking a highway, which “quite consequentially provoked a confrontation between the Baton Rouge police and the protesters.”

Trump, by contrast, did not commit a crime or urge others to do so, even if the violence that followed his speech was predictable. His opponents may regret establishing a precedent that speakers who neither commit nor advocate violence can be prosecuted for the criminal conduct of people inspired by their words.

Which leads me to have a heart of hope with the caliber of some of our Representatives in Congress, and some of their speeches I heard while driving yesterday:

Rep. Tom McClintock, R-Calif., argued against moving forward with a second impeachment against the president during House debate Jan. 13. Democrats are pursuing a quick second impeachment a week after President Donald Trump gave a speech they say incited insurrection. On Jan. 6, while Congress was in the process of counting electoral votes and certifying President-elect Joe Biden’s win, a pro-Trump mob stormed the Capitol, clashed with police, and forced lawmakers to pause their sessions and evacuate to safety.

Rep. Louie Gohmert Uses Pelosi’s Own Words Against Her

THE FEDEERALIST and JUST THE NEWS notes the progressive Left and some media outlets thinking these are violent words. Correct:

Corporate media journalists and left-wing activists took to social media on Wednesday to spread claims that Republican Rep. Louie Gohmert of Texas is in favor of inciting insurrection.

“Here’s a quote. ‘I just don’t even know why there aren’t more uprisings all over the country, and maybe there will be,’” Gohmert said on the House floor during the impeachment debate.

While Gohmert specified that what he was saying was a quote, taken directly from House Speaker Nancy Pelosi’s previous statements encouraging uprisings, journalists and activists quickly twisted his words, publicly speculating and claiming he was calling for increased political violence around the nation. 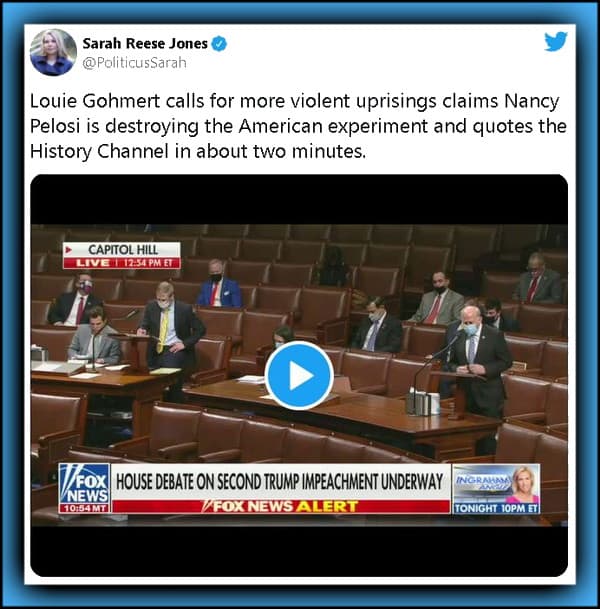 Democrats are pursuing a quick second impeachment a week after President Donald Trump gave a speech they say incited insurrection. On Jan. 6, while Congress was in the process of counting Electoral Votes and certifying President-elect Joe Biden’s win, a pro-Trump mob stormed the Capitol, clashed with police, and forced lawmakers to pause their sessions and evacuate to safety. Rep. Jim Jordan, R-Ohio, said Democrats are pursuing an impeachment because they want to “cancel” him. He said Republicans condemn all violence, and that Democrats hold Republicans to a double standard. Jordan said “cancel culture” is attacking the First Amendment, and warned if it doesn’t stop, “it will come for us all.” He touted Trump’s accomplishments but did not address the president’s rhetoric in his speech before the Capitol riot. He added that a second impeachment will further divide the nation.

Nancy Pelosi said in 2019 they have been trying to impeach Trump for 2-and-a-half-years.

She said it three separate times and so I take her at her word (RPT). Here are some of the article Rep. Jordan was making reference to:

[Even a GOPer FOR impeachment makes some critically important points]

Rep. Chip Roy, R-Texas, said that President Donald Trump deserves “universal condemnation” for perpetuating the false claim that there was widespread fraud in the Nov. 6 election, and for pressuring Vice President Mike Pence to violate his Constitutional duty to count Electoral College votes. While Roy said Trump’s efforts to interfere with the election results amount to what he believes are an impeachable offense, he called the articles drafted by House Democrats “flawed and unsupportable,” and expressed concern they would lead to the stifling of free expression by focusing on incitement and insurrection. “Let us condemn that which must be condemned, and let us do so loudly,” Roy said. “But let us do it the right way, with deliberation, and without disastrous side effects.”

I added a couple videos (President Trump and Vice President Kamala Harris) to enhance Levin’s audio. I think this is a must hear first hour of radio!