The White House put out a Fact Sheet entitled “U.S. Support for Strengthening Democratic Institutions, Rule of Law, and Human Rights in Sub-Saharan Africa.” One of the first items highlighted by the White House is a $53 million program in Kenya that helps young people “obtain National identification cards, a prerequisite to voter registration.” (WEEKLY STANDARD)

Civil society and independent media play a critical role in any vibrant democracy.  Across sub-Saharan Africa, the United States supports efforts to ensure civil society organizations and independent media can organize, advocate, and raise awareness with governments and the private sector to improve political processes, transparency, and government performance.  Examples include:

Bill Clinton doing exactly what he decried Obama doing to his wife… using the race card:

A great article by Jerome Hudson at Human Events entitled, “Democrats Should Know Jim Crow, They Created Him“:

….Likening Republican policies aimed at preserving voter integrity in states from Florida to California to poll taxes and literacy tests of the Jim Crow era proves Democrats are desperate.  Obama’s tax-and-spend agenda stinks on ice.  So his segregation mudslingers—in this case, Clinton—must rely on shopworn clichés that stir racial animus to fire up his left-wing base.

Are Clinton and Shultz insinuating that minorities, college students and the elderly are all born Democrats, that they are more likely to vote for Democratic candidates than Republican candidates?  Is this what Democratic elites think of their constituents?  Do Democrats believe blacks and Latinos, old people and youngsters, are too stupid to acquire a photo I.D. by next November?

Moreover, decrying all Republicans as racists is a Democrat article of faith.  But why dredge up Jim Crow?

In 1832, the phrase “Jim Crow” was born.  By 1900, every former Confederate state (including Wyoming, Missouri, Ohio, Utah, Kentucky, Kansas and Oklahoma) had enacted “Jim Crow” laws prohibiting everything from interracial marriage to racially integrated public school systems.  These state laws served to place blacks back on a virtual plantation.  Similar to the “Black Codes” that came before them, Jim Crow laws were numerous.  However, one denominator codified their sound support in Southern states:  They all resulted from Democratic legislators of the “Solid South.”

When Bill Clinton was 18, his future vice president’s father, Sen. Al Gore Sr., was locked arm-in-arm with other segregationist Democrats to kill the Civil Rights act of 1964.  Clinton’s “mentor” and “friend,” klansman J. William Fulbright, joined the Dixiecrats, an ultra-segregationist wing of Democratic lawmakers, in filibustering the Civil Rights Act of 1957 and in killing the 1965 Voting Rights Act.

Clinton, now 64, in his dotage, probably forgot (or was too embarrassed) to mention to the far-Left crowd of youngsters that his party is the party of segregation.  Or as Congressman Jessie Jackson Jr. (D.-Ill.) explained in an interview with Fox News contributor Angela McGlowan in her book  Bamboozled:

How did the same Jim Crow Democrats who fought tooth-and-nail with segregationists to keep blacks on a virtual plantation become the party that now wins 95% of the black vote?  Republicans passed Civil Rights laws, Democrats wrote revisionist history.

Nevertheless, deception—what all warfare is based on, according to ancient Chinese military strategist Sun Tzu, won’t work with independents.  Obama’s reelection strategy of slander and defaming all conservatives and Republicans as racists won’t win him that all-important center.

Via the Daily Caller: 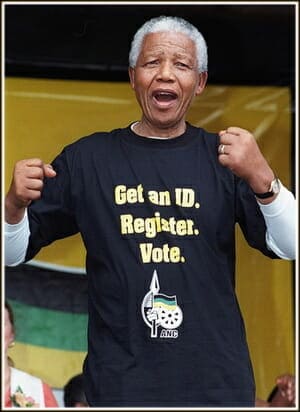 While a progressive advocacy group has used the death of former South African President Nelson Mandela to advocate against voter ID laws, a picture of Mandela has surfaced that indicates the former president might not have agreed.

Friday, One Wisconsin Now issued a statement calling on Wisconsin Republicans to “honor” Mandela by stopping their “attacks on the right to vote for legal voters in the state of Wisconsin.” Those “attacks” are attempts to implement a voter identification requirement.

South Africa, however, requires an ID to vote.

Media Trackers, first highlighted the discrepancy Friday, noting that election officials in South Africa require an ID both to register to vote and to vote.

“That constitution allows for and supports a rigorous election integrity process far more stringent than anything GOP lawmakers have proposed in Wisconsin,” Media Trackers notes.

To make matters worse for One Wisconsin, a picture of Mandela from 1998 finds the former political prisoner attending a rally at the start of the African National Congress 1999 election campaign wearing a T-shirt with the instructions: “Get an ID. Register. Vote.”