Revolutionary Religion: Liberation Theology and the Struggle for Socialism

One must keep in mind that I left a church of twelve years partially for this reason… a mixing of “‘postmodern’ cultural Marxism” in the pastors influence on young minds. And Obama went to a church that was influenced by Liberation Theology in their own “Black Liberation Theology” program…. besides from being anti-white and anti-Semetic. Jimmy Carter as well has fallen into this error.

“We’re going to keep on praising together. I am confident that we can create a Kingdom right here on Earth.” ~ Then, Sen. Obama (2007)

Here is Breitbart’s story on the subject that will renew some interest in the subject for myself and for other friends I know.

In a startling new interview, a 3-star general and former head of Communist Romania’s secret police who defected to the United States in 1978, claims that the Theology of Liberation was the creation of the KGB, who exported it to Latin America as a way of introducing Marxism into the continent.

Ion Mihai Pacepa has been called “the Cold War’s most important defector,” and after his defection, the Romanian government under Nicolae Ceausescu placed two death sentences and a $2 million bounty on his head. During the more than ten years that Pacepa worked with the CIA, he made what the agency described as “an important and unique contribution to the United States.”

He is reported in fact to have given the CIA “the best intelligence ever obtained on communist intelligence networks and internal security services.”

“Liberation theology has been generally understood to be a marriage of Marxism and Christianity. What has not been understood is that it was not the product of Christians who pursued Communism, but of Communists who pursued Christians,” Pacepa said in a recent article. In his role as doctrinal watchdog, Cardinal Joseph Ratzinger called liberation theology a “singular heresy” and a “fundamental threat” to the Church….. 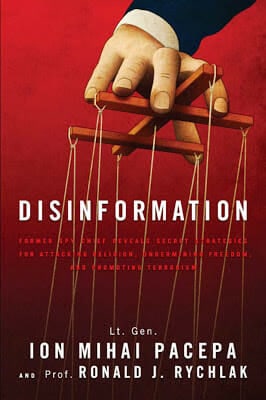 According to the General, during those years, the KGB had a penchant for “liberation” movements, and a Theology of Liberation fit right in.

Pacepa said that Liberation Theology was born of a 1960s top-secret “Party-State Dezinformatsiya Program” approved by Aleksandr Shelepin, the chairman of the KGB, and by Politburo member Aleksey Kirichenko, who coordinated the Communist Party’s international policies.

The program mandated that “the KGB take secret control of the World Council of Churches (WCC), based in Geneva, Switzerland, and use it as cover for converting Liberation Theology into a South American revolutionary tool,” Pacepa said.

The Soviets were aware that the WCC was the largest international ecumenical organization after the Vatican, he said, representing some 550 million Christians of various denominations throughout 120 countries.

According to Pacepa the KGB followed a step-by-step procedure to bring Liberation Theology to Latin America, starting with the establishment of an intermediate international religious organization called the Christian Peace Conference (CPC), headquartered in Prague. Its main task “was to bring the KGB-created Liberation Theology into the real world,” he said.

“The new Christian Peace Conference was managed by the KGB and was subordinated to the venerable World Peace Council, another KGB creation, founded in 1949 and by then also headquartered in Prague,” he said.

In his work with the Soviet bloc intelligence community, Pacepa managed the Romanian operations of the World Peace Council (WPC).

Pacepa said that in 1968 “the KGB-created Christian Peace Conference, supported by the world-wide World Peace Council, was able to maneuver a group of leftist South American bishops into holding a Conference of Latin American Bishops at Medellin, Colombia.”

Though the Conference’s official task was to seek solutions to poverty, its “undeclared goal” was “to recognize a new religious movement encouraging the poor to rebel against the ‘institutionalized violence of poverty,’ and to recommend the new movement to the World Council of Churches for official approval,” he said.

“The Medellin Conference achieved both goals. It also bought the KGB-born name ‘Liberation Theology,’” he said.

Here is a prelude to Obama’s liberation theological influences when I was in seminary:

The correlation/anthropological method have inherent in its premise a restricting aspect in its application to the Christians life. If the theologian starts with man and works his way to God, the Bible and its saving message is viewed through cultural mores and biases. Man can impose then on God, but God cannot impose upon man because one’s culture cannot critique one’s culture. If however the theologian starts with God and works his way towards man, then the saving message of the Bible can confront man and his culture, rather than man’s culture determining God’s message: “…by allowing the culture to specify the questions, one has already determined the kind of answers that the revelation is permitted to give, and that one has also to consider the critical questions that the revelation raises for the culture” (Gentz 1986, p. 228).

Liberation theology has been thrust into the limelight again – at least for the armchair theologian – by Barak Obama, a possible Democratic nominee for President. Mr. Obama’s pastor is an ardent follower of Liberation Theology. Originally it was more Catholic based and in Latin America but has since infected many seminaries in the U.S. and Europe. It teaches that “Christ’s message pertained not only to salvation of the soul, but also to political salvation here on earth through the establishment of Christian socialism” (Frohnen 2006, p. 502). An excerpt from Obama’s church’s website will elucidate somewhat the theological prose involved in “political salvation:”

This wouldn’t be the first time the Soviets (or any totalitarian group) tried to control the reigns of religion. For instance I note in the first chapter of my book the following:

One early attempt by the Bolshevik Revolution to take over the spiritual was through the Renovated Church (also known as the Living Church Movement[10]) which was meant to reinterpret the teachings of Christ and the Apostles towards a Soviet end. During one of the short-lived attempts here by the Soviets we find this official “statement of faith:”

(a) The Soviet power does not appear as a persecutor of the Church.
(b) The Constitution of the Soviet state provides full religious liberty.
(c) Church people must not see in the Soviet state a power of the anti-Christ.
(d) The Soviet power is the only one which tempts by state methods to realize the ideals of the Kingdom of God.
(e) Capitalism is the “great lie” and a “mortal sin.”
(f) The Soviet government is the world leader toward fraternity, equality, and international peace.[11]

And here is a quote from a pamphlet dealing with a bit of this history in the failed “social justice system” entwined in this Marxist (non-Gospel) theology:

As Dr. Carl F. H. Henry pointed out: “The Chicago evangelicals, while seeking to overcome the polarization of concern in terms of personal evangelism or social ethics, also transcended the neo-­Protestant nullification of the Great Commission.” “The Chicago Declaration did not leap from a vision of social utopia to legislation specifics, but concentrated first on biblical priorities for social change.” “The Chicago evangelicals did not ignore transcendent aspects of God’s Kingdom, nor did they turn the recognition of these elements into a rationalization of a theology of revolutionary violence or of pacifistic neutrality in the face of blatant militarist aggression.” (Cf. Dr. Carl F. H. Henry, “Evangelical Social Concern” Christianity Today, March 1, 1974.) The evangelical social concern is transcendental not merely horizontal.