I have always quoted this without a real scholarly reference of where it came from, not any longer:

The book this came from is a large work, and the author stated his purpose and the resources he used to write his book:

There is no doubt that the market is flooded with Gandhi literature. The magnitude of Gandhi reading material, even for a Gandhian scholar, is over­whelming. Because of its incredible bulk, the Gandhi literature has been collec­tively named Gandhiana. In 1955 Jagdish S. Sharma cataloged 3,349 entries published by and about Gandhi in ten European languages. By his second edi­tion in 1968, the number of entries had swelled to 3,671. In 1995 Ananda M. Pandiri compiled much of the Gandhian material published in English, listing references for 985 Gandhi biographies. The number of articles published on Gandhi is mind-boggling, as are the number of speeches about him by pastors, politicians, academicians, journalists, and others. The Gandhi literature comes in many shapes, sizes, and formats: some designed for juveniles, some for intellec­tuals, and much for the innocent adult population. It is spread all over the world by Gandhi propagandists. I will concentrate here on only the literature and the films in order to explore biographies, especially those that are known to have left an impact on their audiences. Since I am investigating a particular Gandhi trait­racism—I will target my search on Gandhi’s role toward the black people of South Africa, where he lived almost twenty-one years. It does make sense to scrutinize him as he is depicted in these important biographies with regard to the Zulu rebellion in 1906. I offer a fair selection of biographies and other important articles related to this period, ranging from the earliest ones in South Africa, Gandhi’s autobiographical accounts, early biographies written in the West (con­sidered to be the most famous), and those authored by reputable scholars. Given the incredible number of biographies available and the different publication times, it is easy to get confused while delving deep in the comprehension process. The solution to prevent such confusion and to aid understanding when reading the biographical materials laid out in chapters 2 through 7 is to juxtapose them in the timeline in the appendix. This will help the reader gain a better appre­ciation and comprehension of its historical settings and sequences.

For our discussion, the most important feature in the timeline—and the one often ignored—is the 1906 incident: “June–July: Gandhi participates in war against blacks.” This incident is paramount for those of us who wish to understand Gandhi’s core. Only once we have studied this can we move outward to untangle the rest of Gandhi’s mystery. Unfortunately, what we know of Gandhi is either through the eyes of the apologists or through the scholars. Collectively, they took the information about the 1906 incident from the pages of Gandhi’s autobiographical accounts penned in the mid-1920s, in this case a flawed method. We need to study Gandhi’s behavior toward blacks before, during, and just after the 1906 incident. Much of this book is woven around studying this phase before we study Gandhi during 1908-1909 and other time periods, including his thirty-two years in India. 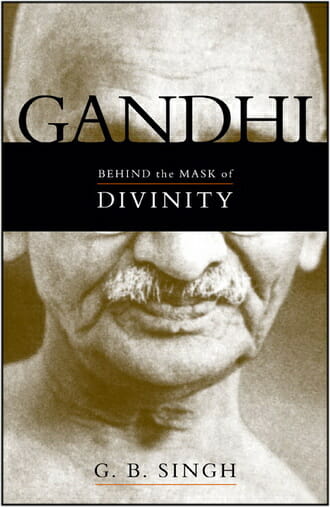 So, the small portion I started with — the quote I have used in the past to show Gandhi’s core-beliefs that counter the “saint-hood” people afford him — is found within a larger contextual piece below. Enjoy:

…. Gandhi started a weekly newspaper in June 1903 at Durban called Indian Opinion. The paper started with a few stated objectives, including: to bring the European and Indian subjects of King Edward closer together. What was the harm in making an effort to bring understanding among all people, irrespective of color, creed, or religion? Gandhi knew that a huge population of blacks and other colored lived in South Africa. They were simply not in his equation, anywhere. Below, I have provided a few good examples of Gandhi’s racism. In response to the White League’s fear of the possible consequence of Asian mass immigration into Transvaal, Gandhi declared in the September 24, 1903 Indian Opinion: “We believe as much in the purity of race as we think they do, only we believe that they would best serve the interest, which is as dear to us as to them, by advocating the purity of all races, and not one alone. We believe also that the white race in South Africa should be the predominating race…” (CWMG 3, #342, p. 453).

In the December 24, 1903, Indian Opinion, in response to similar fears voiced by the all-white Transvaal Chamber of Commerce Conference, Gandhi cited to his earlier petition, “The petition dwells upon ‘the commingling of the Coloured and white races.’ May we inform the members of the Conference that, so far as the British Indians are concerned, such a thing is practically unknown? If there is one thing which the Indian cherishes more than any other, it is the purity of type” (CWMG 4, #70, p. 89). The Indian underclasses evidently did not share Gandhi’s distaste for “commingling” the races.

In Ferreiras Township, a working-class suburb of Johannesburg, the popula­tion breakdown in late 1904 was listed as 288 Indians, 58 Syrians, 165 Chinese, 295 Cape Coloureds, 75 blacks, and 929 whites. Gandhi could do nothing about a place like the Ferreiras Township, but he claimed the right to speak on the racial composition of Indian locations. In February 1904, he informed the Johannes­burg Medical Officer of Health, Dr. C. Porter that, “Why, of all places in Johan­nesburg, the Indian Location should be chosen for dumping down all the Kaffirs of the town passes my comprehension…. Of course, under my suggestion, the Town Council must withdraw the Kaffirs from the Location. About this mixing of the Kaffirs with the Indians, I must confess, I feel most strongly. I think it is very unfair to the Indian population, and it is an undue tax on even the prover­bial patience of my countrymen.”

Ironically, the BIA backed away from its persistent demands about blacks from being removed from the locations, because many merchants profited from the black rental income; Gandhi had to follow suit. Similarly, in March 1906, in a clear contradiction of his previously stated principles, and on behalf of the BIA, Gandhi protested the proposed removal of blacks from the Pretoria location on the grounds that was harmful to merchant interests. He went out of his way to shield his vested interests from any encroachment. Maureen Swan aptly states:

He [Gandhi] strenuously protested against the proposal to import indentured Indians into the Transvaal, particularly if their contracts included a repatriation clause. He referred to the proposed scheme as slave labour. But his major con­cern was evidently the belief that the Indian “problem is complicated enough without their presence,” and that hostility to Indian traders would be fed by a vast influx of Indian workers. That his concern was for the future of the mer­chants, and not the “slave-labourers” per se, is obvious in that he offered sincere congratulations on the decision to import Chinese instead of Indian workers. In 1906 he actually recommended to the Colonial Secretary that Natal merchants be allowed to bypass the Immigration Restriction Act and import Indian clerks and domestics on the understanding that they must leave the colony at the end of the service with their masters. This was an attempt to break what was described as the “monopoly” created by local Indian clerks and domestics, and cannot be described in any other way than an indenture scheme complete with below market wage rates and a repatriation clause.

His views on Indian immigration were also exacerbated by another bizarre concern of his paranoid prejudice against black people, “Let us have a few of our best men to teach us, to bring the highest ideals with them, to advise and shepherd us, and to minister to our spiritual needs, that we may not sink to the level of the aboriginal natives, but rise to be, in every sense, worthy citizens of the Empire.”

Regarding work ethics, Gandhi held a low opinion of blacks, and even with time he never wavered on this issue, “It is one thing to register Natives who would not work, and whom it is very difficult to find out if they absent them­selves, but it is another thing and most insulting to expect decent, hard-working, and respectable Indians, whose only fault is that they work too much, to have themselves registered and carry with them registration badges” (CWMG 4, #152, p. 193). Commenting in an editorial on the Natal Municipal Corporation Bill, in the March 18, 1905, Indian Opinion Gandhi was not enthused with the term “uncivilized races” being used to denote not just blacks but also the Indians. Gandhi was vehemently against including Indians (even underclasses) with blacks: “Clause 200 makes provision for registration of persons belonging to uncivilized races (meaning the local blacks), resident and employed within the borough. One can understand the necessity for registration of Kaffirs who will not work; but why should registration be required for indentured Indians who have become free, and for their descendants about whom the general complaint is that they work too much?” (CWMG 4, #319, pp. 379-81 [my italics]).

For a clear contrast one need look no further than Jesus:

The nine founders among the eleven living religions in the world had characters which attracted many devoted followers during their own lifetime, and still larger numbers during the centuries of subsequent history. They were humble in certain respects, yet they were also confident of a great religious mission. Two of the nine, Mahavira and Buddha, were men so strong-minded and self-reliant that, according to the records, they displayed no need of any divine help, though they both taught the inexorable cosmic law of Karma. They are not reported as having possessed any consciousness of a supreme personal deity. Yet they have been strangely deified by their followers. Indeed, they themselves have been worshipped, even with multitudinous idols.

All of the nine founders of religion, with the exception of Jesus Christ, are reported in their respective sacred scriptures as having passed through a preliminary period of uncertainty, or of searching for religious light. Confucius, late in life, confessed his own sense of shortcomings and his desire for further improvement in knowledge and character. All the founders of the non-Christian religions evinced inconsistencies in their personal character; some of them altered their practical policies under change of circumstances.

Jesus Christ alone is reported as having had a consistent God consciousness, a consistent character himself, and a consistent program for his religion. The most remarkable and valuable aspect of the personality of Jesus Christ is the comprehensiveness and universal availability of his character, as well as its own loftiness, consistency, and sinlessness.