Before the excerpt from John Tierney‘s article in THE CITY JOURNAL titled:

I wanted to add some thoughts from THE FOUNDATION FOR ECONOMIC FREEDOM’S recent “Swedish/Covid” post (hat-tip AMERICAN THINKER):

….One country not making much news is Sweden.

Sweden, of course, was maligned in 2020 for foregoing a strict lockdown. The Guardian called its approach “a catastrophe” in the making, while CBS News said Sweden had become “an example of how not to handle COVID-19.”

Despite these criticisms, Sweden’s laissez-faire approach to the pandemic continues today. In contrast to its European neighbors, Sweden is welcoming tourists. Businesses and schools are open with almost no restrictions. And as far as masks are concerned, not only is there no mandate in place, Swedish health officials are not even recommending them.

What are the results of Sweden’s much-derided laissez-faire policy? Data show the 7-day rolling average for COVID deaths yesterday was zero (see below). As in nada. And it’s been at zero for about a week now. 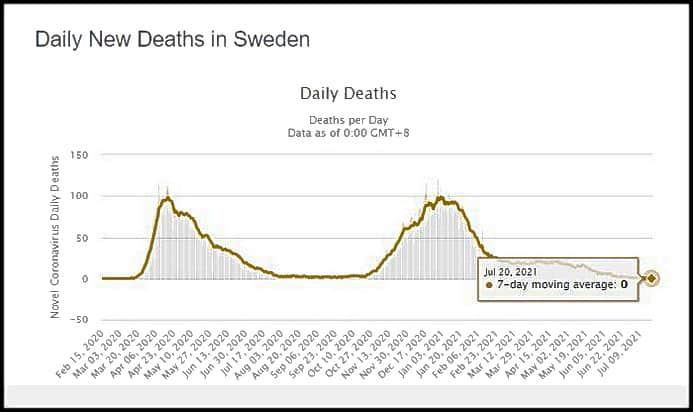 Even a year ago, it was clear the hyperbolic claims about “the Swedish catastrophe” were false; just ask Elon Musk (also see: here, here, and here). But a year later the evidence is overwhelming that Sweden got the pandemic mostly right. Sweden’s overall mortality rate in 2020 was lower than most of Europe and its economy suffered far less. Meanwhile, today Sweden is freer and healthier than virtually any other country in Europe.

As much of the world remains gripped in fear and nations devise new restrictions to curtail basic freedoms, Sweden remains a vital and shining reminder that there is a better way.

I can already foresee the response from the skeptics… however, “Data show that the policies of Finland and Norway have been even less restrictive than Sweden’s for most of the pandemic.” 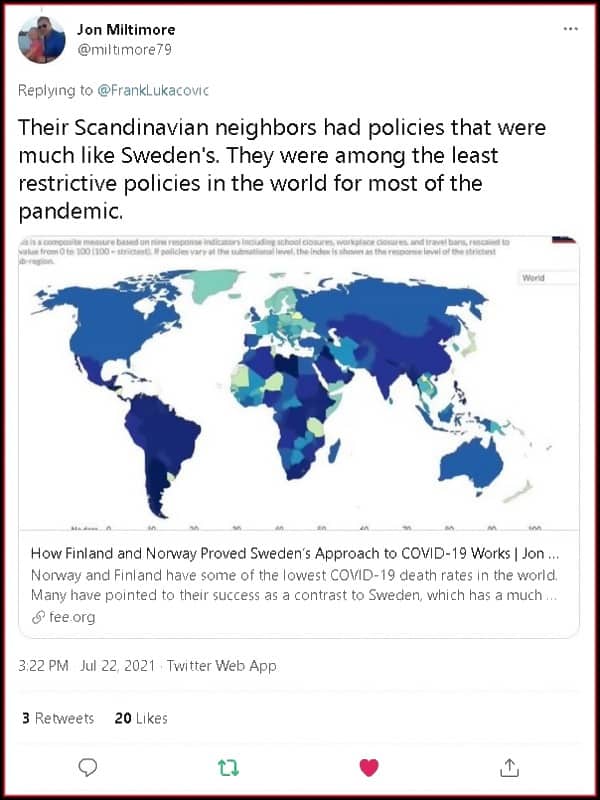 Here is the CITY JOURNAL’s article:

….If the treatment group in a clinical trial were dying off faster than the control group, an ethical researcher would halt the experiment. But the lockdown proponents were undeterred by the numbers in Florida, or by similar results elsewhere, including a comparable natural experiment involving European countries with the least restrictive policies. Sweden, Finland, and Norway rejected mask mandates and extended lockdowns, and they have each suffered significantly less excess mortality than most other European countries during the pandemic.

A nationwide analysis in Sweden showed that keeping schools open throughout the pandemic, without masks or social distancing, had little effect on the spread of Covid, but school closures and mask mandates for students continued elsewhere. Another Swedish researcher, Jonas Ludvigsson, reported that not a single schoolchild in the country died from Covid in Sweden and that their teachers’ risk of serious illness was lower than for the rest of the workforce—but these findings provoked so many online attacks and threats that Ludvigsson decided to stop researching or discussing Covid.

Social-media platforms continued censoring scientists and journalists who questioned lockdowns and mask mandates. YouTube removed a video discussion between DeSantis and the Great Barrington scientists, on the grounds that it “contradicts the consensus” on the efficacy of masks, and also took down the Hoover Institution’s interview with Atlas. Twitter locked out Atlas and Kulldorff for scientifically accurate challenges to mask orthodoxy. A peer-reviewed German study reporting harms to children from mask-wearing was suppressed on Facebook (which labeled my City Journal article “Partly False” because it cited the study) and also at ResearchGate, one of the most widely used websites for scientists to post their papers. ResearchGate refused to explain the censorship to the German scientists, telling them only that the paper was removed from the website in response to “reports from the community about the subject-matter.”

The social-media censors and scientific establishment, aided by the Chinese government, succeeded for a year in suppressing the lab-leak theory, depriving vaccine developers of potentially valuable insights into the virus’s evolution. It’s understandable, if deplorable, that the researchers and officials involved in supporting the Wuhan lab research would cover up the possibility that they’d unleashed a Frankenstein on the world. What’s harder to explain is why journalists and the rest of the scientific community so eagerly bought that story, along with the rest of the Covid narrative.

Why the elite panic? Why did so many go so wrong for so long? When journalists and scientists finally faced up to their mistake in ruling out the lab-leak theory, they blamed their favorite villain: Donald Trump. He had espoused the theory, so they assumed it must be wrong. And since he disagreed at times with Fauci about the danger of the virus and the need for lockdowns, then Fauci must be right, and this was such a deadly plague that the norms of journalism and science must be suspended. Millions would die unless Fauci was obeyed and dissenters were silenced.

But neither the plague nor Trump explains the panic. Yes, the virus was deadly, and Trump’s erratic pronouncements contributed to the confusion and partisanship, but the panic was due to two preexisting pathologies that afflicted other countries, too. The first is what I have called the Crisis Crisis, the incessant state of alarm fomented by journalists and politicians. It’s a longstanding problem—humanity was supposedly doomed in the last century by the “population crisis” and the “energy crisis”—that has dramatically worsened with the cable and digital competition for ratings, clicks, and retweets. To keep audiences frightened around the clock, journalists seek out Cassandras with their own incentives for fearmongering: politicians, bureaucrats, activists, academics, and assorted experts who gain publicity, prestige, funding, and power during a crisis.

Unlike many proclaimed crises, an epidemic is a genuine threat, but the crisis industry can’t resist exaggerating the danger, and doomsaying is rarely penalized. Early in the 1980s AIDS epidemic, the New York Times reported the terrifying possibility that the virus could spread to children through “routine close contact”—quoting from a study by Anthony Fauci. Life magazine wildly exaggerated the number of infections in a cover story, headlined “Now No One Is Safe from AIDS.” It cited a study by Robert Redfield, the future leader of the CDC during the Covid pandemic, predicting that AIDS would soon spread as rapidly among heterosexuals as among homosexuals. Both scientists were absolutely wrong, of course, but the false alarms didn’t harm their careers or their credibility.

Journalists and politicians extend professional courtesy to fellow crisis-mongers by ignoring their mistakes, such as the previous predictions by Neil Ferguson. His team at Imperial College projected up to 65,000 deaths in the United Kingdom from swine flu and 200 million deaths worldwide from bird flu. The death toll each time was in the hundreds, but never mind: when Ferguson’s team projected millions of American deaths from Covid, that was considered reason enough to follow its recommendation for extended lockdowns. And when the modelers’ assumption about the fatality rate proved too high, that mistake was ignored, too.

Journalists kept highlighting the most alarming warnings, presented without context. They needed to keep their audience scared, and they succeeded. For Americans under 70, the probability of surviving a Covid infection was about 99.9 percent, but fear of the virus was higher among the young than among the elderly, and polls showed that people of all ages vastly overestimated the risk of being hospitalized or dying.

The second pathology underlying the elite’s Covid panic is the politicization of research—what I have termed the Left’s war on science, another long-standing problem that has gotten much worse. Just as the progressives a century ago yearned for a nation directed by “expert social engineers”—scientific high priests unconstrained by voters and public opinion—today’s progressives want sweeping new powers for politicians and bureaucrats who “believe in science,” meaning that they use the Left’s version of science to justify their edicts. Now that so many elite institutions are political monocultures, progressives have more power than ever to enforce groupthink and suppress debate. Well before the pandemic, they had mastered the tactics for demonizing and silencing scientists whose findings challenged progressive orthodoxy on issues such as IQ, sex differences, race, family structure, transgenderism, and climate change.

And then along came Covid—“God’s gift to the Left,” in Jane Fonda’s words. Exaggerating the danger and deflecting blame from China to Trump offered not only short-term political benefits, damaging his reelection prospects, but also an extraordinary opportunity to empower social engineers in Washington and state capitals. Early in the pandemic, Fauci expressed doubt that it was politically possible to lock down American cities, but he underestimated the effectiveness of the crisis industry’s scaremongering. Americans were so frightened that they surrendered their freedoms to work, study, worship, dine, play, socialize, or even leave their homes. Progressives celebrated this “paradigm shift,” calling it a “blueprint” for dealing with climate change.

This experience should be a lesson in what not to do, and whom not to trust. Do not assume that the media’s version of a crisis resembles reality. Do not count on mainstream journalists and their favorite doomsayers to put risks in perspective. Do not expect those who follow “the science” to know what they’re talking about. Science is a process of discovery and debate, not a faith to profess or a dogma to live by. It provides a description of the world, not a prescription for public policy, and specialists in one discipline do not have the knowledge or perspective to guide society. They’re biased by their own narrow focus and self-interest. Fauci and Deborah Birx, the physician who allied with him against Atlas on the White House task force, had to answer for the daily Covid death toll—that ever-present chyron at the bottom of the television screen—so they focused on one disease instead of the collateral damage of their panic-driven policies.

“The Fauci-Birx lockdowns were a sinful, unconscionable, heinous mistake, and they will never admit they were wrong,” Atlas says. Neither will the journalists and politicians who panicked along with them. They’re still portraying lockdowns as not just a success but also a precedent—proof that Americans can sacrifice for the common good when directed by wise scientists and benevolent autocrats. But the sacrifice did far more harm than good, and the burden was not shared equally. The brunt was borne by the most vulnerable in America and the poorest countries of the world. Students from disadvantaged families suffered the most from school closures, and children everywhere spent a year wearing masks solely to assuage the neurotic fears of adults. The less educated lost jobs so that professionals at minimal risk could feel safer as they kept working at home on their laptops. Silicon Valley (and its censors) prospered from lockdowns that bankrupted local businesses.

Luminaries united on Zoom and YouTube to assure the public that “we’re all in this together.” But we weren’t. When the panic infected the nation’s elite—the modern gentry who profess such concern for the downtrodden—it turned out that they weren’t so different from aristocrats of the past. They were in it for themselves.