Firstly, here is the video as well as the typical line thrown about on FaceBook: “Senator Chaffetz admitted we have to prioritize, and the Senate voted down funding for additional security in Benghazi. I really love it, especially coming from Chaffetz.”

Here is the rest of the story:

Senate Homeland Security Report: Congress Has Been Responsive To Appropriating More Money To The State Department For Security-Driven Requests, But Neither The President Nor The State Department Requested Additional Funds For Libya. “At the same time, Congress has generally been responsive in providing supplemental and Overseas Contingency Operations (OCO) funds to the Department of State – more than $1.7 billion since 2007 – in response to emergent, security-driven funding requests, although primarily for facilities in Iraq, Afghanistan and Pakistan. However, there was no supplemental or OCO request made by the President for additional diplomatic security enhancements in FY2010 or FY2011. Neither the Department of State nor Congress made a point of providing additional funds in a supplemental request for Libya, or more specifically, Benghazi.” (“Flashing Red: A Special Report On The Terrorist Attack At Benghazi,” United States Senate Committee On Homeland Security And Government Affairs, 12/30/12, p. 17)

I am posting about this because there seems to be a misunderstanding of budgets and who is at fault and how much is given to the parties requesting it.

For instance, a charge always heard during Bush’s presidency was that he cut veterans benefits during his presidency. This was not the case, the Republicans passed continual increases while trimming the growth. In fact, benefits grew quicker under Bush than Clinton!

Similar, but not identically, as the U.S. was withdrawing from Iraq, the budget for the State Dept was trimmed. But before getting to the charts, let’s see what Hillary Clinton said in regards to the spending on Security:

During Previous Congressional Testimony, Clinton Stated That She Would “Be The First To Say” That The State Department’s Prioritization Of Funds Was “Imperfect.”SECRETARY CLINTON: “And I – I would go back to something the chairman said, because this was a point made in the ARB: Consistent shortfalls have required the department to prioritize available funding out of security accounts. And I will be the first to say that the prioritization process was at times imperfect, but as the ARB said, the funds provided were inadequate. So we need to work together to overcome that.” (Secretary Hillary Clinton, Committee On Foreign Relations, U.S. Senate, Testimony, 1/23/13)

Clinton Indicated That The State Department’s Designation Of The Benghazi Facility As Temporary Contributed To The State Department Not Allocating Additional Resources To Benghazi. SECRETARY CLINTON: “That’s why we have a huge workforce of people who are given responsibility and expected to carry forward that responsibility and I think designating it as ‘temporary’ in the ARB’s findings did cause an extra level of uncertainty to some extent.  You know, as the chairman said at the very beginning quoting from the ARB, the has been an enculturation in the State Department, the husband (ph) resources to, you know, try to be as — as careful in spending money as possible and then I think adding to that the fact that it was quote, ‘temporary’ you know, probably did lead to some of the confusion that we later saw played out in the cables, but not the — the status of it for the Libyan government.” (Secretary Hillary Clinton, Committee On Foreign Relations, U.S. Senate, Testimony, 1/23/13)

Take note as well the information gleaned from the following graph:

There has been some back and forth between Republicans and Democrats over funding for security in Libya in the wake of Ambassador Chris Stevens’s death. Republicans have questioned whether the State Department had adequate security to protect the ambassador, and Democrats have countered that Republicans tried to cut funding for embassy security. What does the budget record show?

According to the fiscal year (FY) 2013 Congressional Budget Justification Department of State Operations (p. 11), overall funding for those programs has increased sharply over the past decade. Indeed, Worldwide Security Protection is more than double what it was a decade ago. Despite reductions from budget peaks in FY 2009 and FY 2010, both budget lines are higher than in FY 2008. (continues below chart) 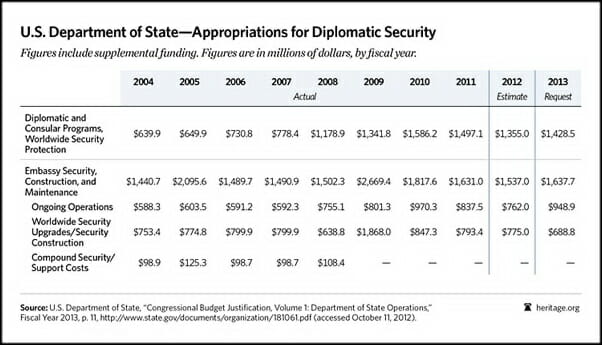 It is tempting to look for a scapegoat for the tragic events in Libya. However, if one exists, the overall budget for embassy security is not it.

…State Department officials, meanwhile have said publicly that budgets were not a factor.

During a House hearing into the attack on Oct. 10, 2012, Rep. Dana Rohrabacher asked deputy assistant secretary of state Charlene Lamb: “Was there any budget consideration and lack of budget which led you not to increase the number of people in the security force there?”

Later, Rep. Blake Farenthold, R-Texas, asked, “So there’s not a budget problem. It’s not you all don’t have the money to do this?”

“Sir, it’s a volatile situation. We will move assets to cover that,” Lamb said.

Issa said, “Mr. Nordstrom, you were on that panel. Do you remember what she (Lamb) said?”

It’s true that Congress did not fully fund embassy security requests from the Obama administration in recent years, which is what Farrow argues amounts to a “cut.” But funding for embassy security is up from 2008, and up dramatically since before 9/11.

How does this tie into the Benghazi attack? State Department officials and government experts lay more blame on decisions by upper management not to provide the temporary Benghazi facility with more officers and better protections than the availability of money.

Farrow made that very point in his segment, which makes it odd that he led his segment by tying the attack with insufficient congressional funding.

We rate his claim Mostly False.