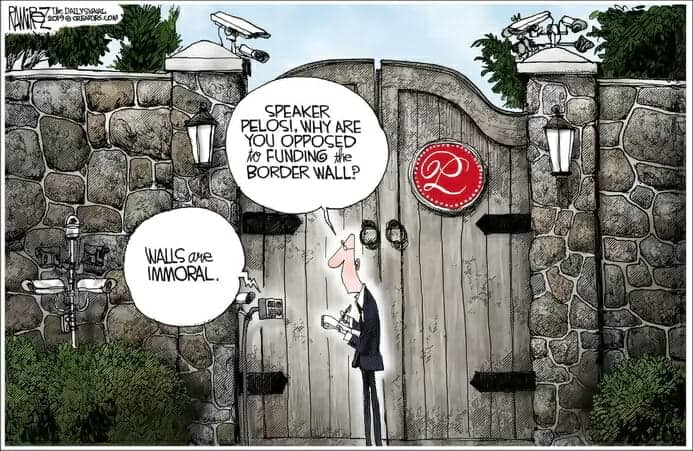 INVESTORS BUSINESS DAILY has a great article on the border topic:

NPR’s “fact check” — like countless others — dismissed Trump’s claim as false because “illegal border crossings in the most recent fiscal year (ending in September 2018) were actually lower than in either 2016 or 2014.”

What they aren’t telling you is border patrol agents apprehended more than 100,000 people trying to enter the country illegally in just October and November of last year. Or that that number is way up from the same two months the year before.

Nor do they mention that last year, the border patrol apprehended more than half a million people trying to get into the country illegally. And that number, too, is up from the year before.

Trump’s critics certainly don’t bother to mention that those figures only count illegals the border patrol caught. It does not count the ones who eluded border patrol agents and got into the country.

The Department of Homeland Security claims that about 20% of illegal border crossers make it into the country. Other studies, however, say border agents fail to apprehend as much as 50% of illegal crossers.

Even at the lower percentage, that means that 104,000 illegals made it into the country in 2018 alone.

Is that not a crisis at the border?

Pelosi and company also don’t bother to mention the fact that there are already between 12 million and 22 million illegals — depending on which study you use — in the country today.

Let’s put that number in perspective.

It is, in short, a massive number.

Critics also complain that Trump overstated the risk of illegal immigrants committing crimes. They all point to a report from the Cato Institute, a pro-immigration libertarian think tank. Cato did a statistical analysis of census data and concluded that incarceration rates for Hispanic illegals were slightly lower than those of the native-born.

But the Center for Immigration Studies looked at federal crime statistics. It found that noncitizens accounted for more than 20% of federal convictions, even though they make up just 8.4% of the population.

“It is almost certain that a majority of noncitizens convicted of federal crimes are illegal immigrants,” said Steven Camarota of the CIS.

Even if Cato is right that the crime rate among Hispanic illegals is a bit lower than for natives, that’s cold comfort to victims of these crimes, which would not have happened had the border been more secure. They would likely agree with Trump about their being a crisis at the border…..