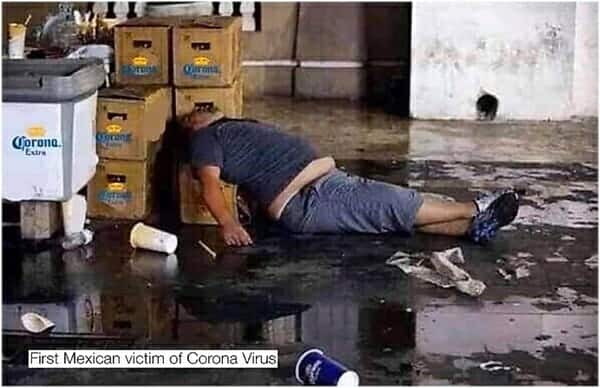 The breathless reporting from pretty much every source, with the exception of Michael Fumento in the NY Post is typical of the no-nothings in the media and their tenuous relationship with logic and the Scientific Method and pesky little things like data and numbers and statistics.

And the facts are very, very thin. We don’t know much other than what the Chinese government is telling the world, and I believe them about as much as I believe that Epstein killed himself. Maybe it’s worse than they are reporting. Maybe it is overblown to deflect attention from other things in China, like Hong Kong! And maybe it is just like most of the other diseases that emerge from China and then fizzle in developed countries because we are healthier, cleaner, have better medical care and more efficient ways to get that care to the people who need it.

I have no idea how this will shake out. Is it the next pandemic, with hundreds of millions dead? Maybe, but I doubt it. Is it the next SARS? Probably. And how many Americans died of SARS? From the CDC:

For all of American medicine’s faults, we do a pretty good job of minimizing the severity of things like the flu and TB and Measles and Pertusis and all sorts of diseases that are major killers in other parts of the world. Will I take a trip to Wuhan? hell no. But until there is evidence of this virus being a significant health threat in the developed world I will not worry too much.

A CNN reporter broadcasts from Wuhan, China, on the recent viral outbreak. There is nobody near who could possibly infect him ­— unless the cameraman has Guinness Book of Records coughs and sneezes. So why does he insist on wearing a blue surgical mask while talking?

It’s called “drama,” which is badly needed, because there appears to be nothing very special about this outbreak of the 2019-nCoV or Wuhan ­virus. It should actually be called the DvV, or Déjà vu Virus, because we have been through these hysterias before. Over and over. Heterosexual AIDS, Ebola repeatedly, the H1N1 swine flu that was actually vastly milder than the regular flu and, especially, severe acute respiratory syndrome (SARS) in 2003.

Once you start debunking mass hysteria over outbreaks, it gets easy, because the same patterns repeat themselves.

The best remedy for all epidemic hysteria is perspective. How is this new outbreak different and thus potentially more dangerous from other diseases we have dealt with in the past or are dealing with now?

Wuhan is repeatedly labeled “deadly” — but so is every other ­virus most people know about. But especially deadly? Nearly 600 cases have been confirmed with at least 17 reported deaths.

What we can say for sure is that Wuhan will be a lot worse in China, simply because health care there is vastly inferior. It appears that, like flu, Wuhan usually kills through ­often treatable secondary infections. Well, treatable in the West. You’d be surprised at how many potentially deadly diseases ­(malaria, TB) Americans get that wreak havoc in much of the world but kill essentially none of us.

Contagiousness is highly important, of course. But so far, there is no evidence that Wuhan, first ­reported more than three weeks ago, is more contagious than ­influenza or spreads differently.

Those are the important factors; everything else is noise and tinfoil-hat paranoia.

Chinese health officials warned it could mutate further to either become more deadly or more contagious. Same was said about the aforementioned outbreaks. Actually, viruses usually mutate to become less deadly, to preserve the host body and hence themselves.

The media are correct in saying the closest comparison here is SARS. It also was first reported in China and was what’s called a coronavirus. But while they want you to remember SARS as akin to the Black Death with cries of “Bring out your dead!,” fact is, there was a grand total of only 8,098 cases, of whom 774 died. Then the disease simply disappeared. More than 7,000 of those cases and about 650 of the deaths occurred just in mainland China and Hong Kong. The United States had just 75 cases and zero deaths.

By contrast, the CDC estimates about 80,000 Americans died of flu two seasons ago.

So if you want, buy a (probably worthless) surgical mask to play “twins” with those “courageous” TV newsmen. Or you may consider that flu shots are still available.