Or the Washington Post (WaPo) publishing an article on Thursday on how the Russians used American websites to push anti-Hillary Clinton propaganda in the 2016 election. The problem was, however, the the source for their story admitted to lying:

Within a day of the article coming out, PropOrNot’s story is already unraveling. The group admitted to lying about its partnering organizations and refuses to disclose why its media blacklist of “Russian agents” contains some of the best journalists in recent history: Robert Parry (who helped break the Iran-Contra scandal), Robert Scheer (who helped expose CIA funding of student groups in the 1960s as editor at Ramparts) and Yves Smith (the fearless founder of an invaluable and respected financial blog, nakedcapitalism.com). It’s shocking and disturbing that WaPo would smear respected journalists as traitors with no evidence.

Details about this group continue to emerge. It appears there’s a chance that PropOrNot is connected to groups funded the Broadcasting Board of Governors, a CIA spinoff that manages the U.S. government’s foreign propaganda division. If true, that would make PropOrNot’s activities illegal — in violation of a federal law that prohibits the BBG from intentionally influencing or swaying public opinion inside the United States. Creating blacklists of American journalists, labelling them as traitors and then circulating this information to American newspapers would certainly fall into that category.

Maybe Russia has the means to “hack” America’s elections, but it’s hard to talk about it without real evidence. Sure, Russia’s been getting into the psyops game much more lately — with fake and biased news, comment trolls and Twitter bots. It’s cheap and effective, and good at exploiting people’s increasing lack trust in their country’s institutions and political process. But in reality it seems to have very little penetration of America’s media landscape. Let’s face it: life is miserable and getting more miserable by the day for most Americans — and no one in power seems to care one way or another. Americans don’t need a Russian Twitter bot to undermine their trust in the Democratic Party.

Or how bout when the L.A. Times knew about John Edwards affair while running for President, but kept the story bottled up:

The mainstream media’s near-silence about a tabloid report that former presidential candidate John Edwards had an extramarital affair with a campaign worker ended abruptly Friday when he admitted the relationship to ABC News.

Fox News, CNN and MSNBC all had extensive coverage of the scandal throughout the afternoon, and the Los Angeles Times, the New York Times and the Washington Post quickly posted stories on their websites.

Several newspapers, including the Los Angeles Times, had been pursuing the story prior to Friday. But the burst of attention after he confirmed a romantic relationship with Rielle Hunter, who produced video documentaries for his campaign website, was in marked contrast to the way those news organizations had tiptoed around the original reports….

“The study found a huge disparity in the airtime devoted to advancing more gun control versus arguments in favor of gun rights.,” he continued, noting that the time spent in favor of more gun control was 65 minutes, compared to eight minutes spent on Second Amendment rights and other pro-gun issues.

NBC followed with nine times as much airtime for anti-gun rights arguments, with ABC in third place with a 4 to 1 ratio.

How bout the medias tendency to not be fair and balanced, thus, guiding public opinion in some way (stories linked in graphics):

Some older examples from ABC, NBC, CBS that include some stats on story imbalances…. as IF they are trying to advocate for something… hmmm:

So all the recent “HUB-BUB” in regards to “fake news” is really an attempt to control the news by corporate news interests. If you do not know WHY this is not a good thing, please read 1984 again. And this bias is not conspiratorial as much as a worldview issue that cause it’s adherents not to lie or conspire about slanting stories as much as a form of group-think. (ALTHOUGH THIS “CONSPIRING” DOES HAPPEN.) Often times this “group-think” is ripped from it’s context to say people are involved in a giant conspiracy.

And this is the crux of the matter… No matter if there is a conspiracy or not, the goals are the same. BUT — and this is an important BUT — how one responds and interacts with society is impacted… greatly. In other words if you tell people of these “grand conspiracies” or “meta-narratives” you will not change anyone’s mind but harm your position. However, if you talk about worldviews and group-think, you will impact minds on the matter, thus, fortifying the case trying to made in regards to media bias.

Hugh Hewitt talks about a time he got to speak to a graduating class of journalists at [I think] Columbia University School of Journalism. He asked the crowd some questions and asked them to separate themselves to one side or the other of the auditorium ~ (questions like: are you pro-life or pro-choice?… are you pro 2nd amendment of for gun control? etc., etc.). By the end of the 5-questions, only a handful were left on one side… all the liberal/progressives were packed into one side of the auditorium. His point was to show this graduating class that what they believe now will impact their work, and that they should be aware [self-aware] of their own biases and try to be reporters, not “change” agents.

(Link to Wikileaks emails showing collusion with Hillary and the Media) 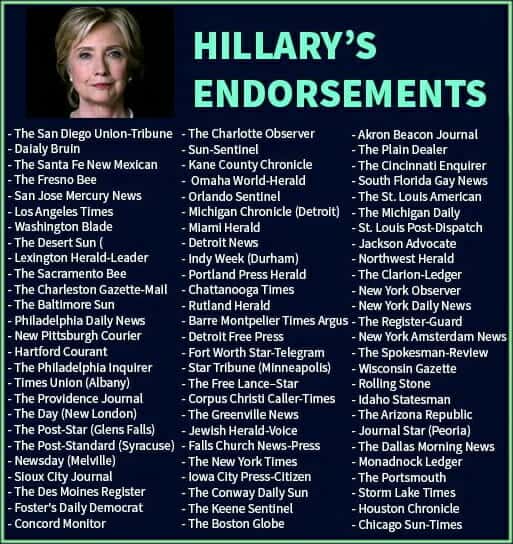 Another recent example can be expressed in donations to campaigns. In an excellent article entitled, “Journalists shower Hillary Clinton with campaign cash: Far fewer making contributions to Donald Trump, analysis shows,” we see the percentages donated from journalists to the Hillary or Trump campaigns:

In all, people identified in federal campaign finance filings as journalists, reporters, news editors or television news anchors — as well as other donors known to be working in journalism — have combined to give more than $396,000 to the presidential campaigns of Clinton and Trump, according to a Center for Public Integrity analysis.

Nearly all of that money — more than 96 percent — has benefited Clinton: About 430 people who work in journalism have, through August, combined to give about $382,000 to the Democratic nominee, the Center for Public Integrity’s analysis indicates.

About 50 identifiable journalists have combined to give about $14,000 to Trump. (Talk radio ideologues, paid TV pundits and the like — think former Trump campaign manager-turned-CNN commentator Corey Lewandowski — are not included in the tally.)