Sadly, the youngster has never received treatment and is taunted by the other children in her remote village on the outskirts of Phnom Penh, Cambodia.

Relatives and local monks have lead Bo to believe that her appearance is because of bad karma she is carrying from a past life – one of the fundamental teachings of Buddhism.

Bo said that when she rides her bike the other kids yell ”old folk” at her. While even her siblings call her ”grandmum” instead of sister.

The youngster now dreams of having plastic surgery to ”make her pretty”.

…devout Buddhist, named Voeun, told her that her appearance is down to a ”bad path” from a previous life which is still haunting her to this day.

In the video, Bo appears to agree and says that she ”was shot in a previous life” and has ”not cleared the bad path yet”.

She said: ”My mom had a dream and saw that she took a flower which had already bloomed, then she gave birth to me with the old face.”

Monk Voeun adds: ”I feel pity for her. When we are born, we always studied about the bad path. People were born in this place or that place based on the good or bad path that have taken before….

I have noted the depravity of the Eastern Worldviews for years… here is one story I include in my chapter on this:

Another illustration with some personal dialogue between some aid workers will help explain this concept some more:

While speaking in Thailand, Ron Carlson was invited to visit some refugee camps along the Cambodian border. Over 300,000 refugees were caught in a no-man’s-land along the border. This resulted from the Cambodian massacre under Pol Pot and the Khmer Rouge in the mid-70’s (which is known as the “killing fields”) and then subsequently by the invasion of the Vietnamese at the end of the 70’s. One of the most fascinating things about these refugee camps was the realization of who was caring for the refugees. Here, in this Buddhist country of Thailand, with Buddhist refugees coming from Cambodia and Laos, there were no Buddhists taking care of their Buddhist brothers. There were also no Atheists, Hindus, or Muslims taking care of those people. The only people there, taking care of these 300,000[+] people, were Christians from Christian mission organizations and Christian relief organizations. One of the men Ron was with had lived in Thailand for over twenty-years and was heading up a major portion of the relief effort for one of these organizations. Ron asked him: “Why, in a Buddhist country, with Buddhist refugees, are there no Buddhists here taking care of their Buddhist brothers?” Ron will never forget his answer:

“Ron, have you ever seen what Buddhism does to a nation or a people? Buddha taught that each man is an island unto himself. Buddha said, ‘if someone is suffering, that is his karma.’ You are not to interfere with another person’s karma because he is purging himself through suffering and reincarnation! Buddha said, ‘You are to be an island unto yourself.’” – “Ron, the only people that have a reason to be here today taking care of these 300,000 refugees are Christians. It is only Christianity that people have a basis for human value that people are important enough to educate and to care for. For Christians, these people are of ultimate value, created in the image of God, so valuable that Jesus Christ died for each and every one of them. You find that value in no other religion, in no other philosophy, but in Jesus Christ.” 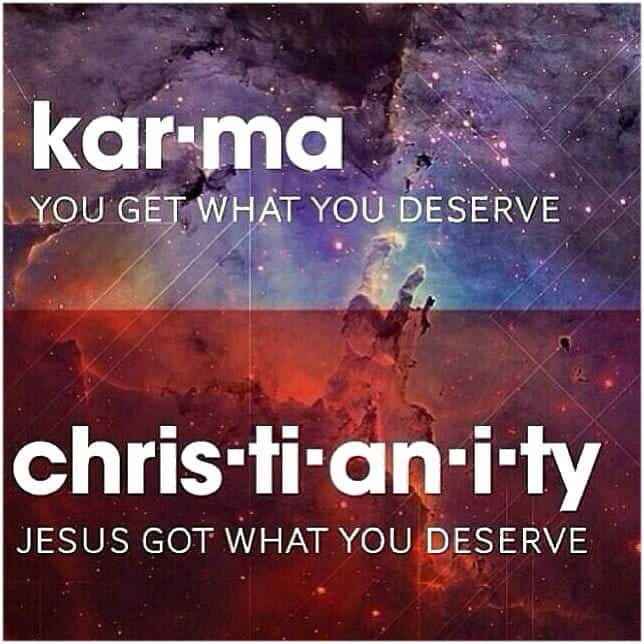 In a personal conversation in a philosophy class where I “paraphrased” the following to elucidate my point to the professor (who was a Hindu) was this final example of mine (also in the above linked chapter):

Another example, albeit more poignant, is that of a mock conversation between a Buddhist named Zen, and a non-religious person named Atos.

Atos: What if in my reality, my “island,” it is wrong for people to own things, and so when you’re not looking, I elect to play “Robin Hood” by relieving you of your new two-thousand-dollar-crystal and giving it to someone else?

Zen: Well, uh, I guess I’d have to conclude that my Higher Self wanted me to learn a lesson about material things [as Buddhism teaches and New Age thought teaches].

Atos: Okay, if stealing is not a sin, lets take it further. Now let’s pretend I’m a “pedophile” – its part of my reality to “love” children in every way possible. So, while you’re at work I’m going to invite your children into my home to play a “game” that I’ve made up. Is that all right with you?

Zen: It most certainly is not! It would be part of my reality to report you to the police.

Atos: Why? After all, it’s the reality I’ve sovereignly chosen to create for myself. What gives you the right to interfere in the reality of another god? [Which are what Eastern religions teach, coming to the realization that you are one with the Brahmin.]

Zen: Simple. Your reality is infringing on my children’s reality.

Atos: But according to your belief system, before your child incarnated she chose you [by past actions] as her parent and she also chose whatever happens to them, including my act, and you’ve no right to interfere. [They have “chosen” this act and life by a previous life and lifestyle – karma. An adaptation from Ravi Zacharias makes the point that one doesn’t even know ultimately if it was something in your previous life or something in the parents previous life or the child’s previous life (or others involved) that dictated this karmic outcome![1]]

Atos: Can you see my point now? You are naturally and rightly outraged at the very suggestion of such an act. Something within you knows that it is wrong in and of itself! This reality is in direct contrast to what you should believe if your Buddhist philosophy holds true.

Zen: You are right.

Atos: But that can only be so if there are absolute rights and wrongs independent of our personal reality [which Eastern religions don’t teach]. Yet, try as you may, you will not find a ground for such moral absolutes and human value in your worldview. Your God is impersonal and amoral, “beyond good and evil,” so you can’t appeal to It [as “It” is impersonal]. In addition, since in your view [Buddhism or Hinduism] we are all equally gods, my truth about any subject is as good as your truth. So you see, Eastern beliefs fail the test of human experience – it cannot be consistently lived out.[2]

I hope, with this graphic example, one can see the problem with karma, reincarnation, and the philosophy that naturally follows. Believing that if my son were to be raped (sodomized) and very probably killed by the perpetrator (all over the news these days)… and then believing that something my son did in a previous lifetime demanded that this happen to him in this lifetime is a religious philosophy that just doesn’t compute with reality. And to deny this thinking is to insert a Western view of human nature that is foreign to Eastern thought. In doing this, said person is “Christianizing” Eastern religion to fit their pre-conceived ideals and moral values learned in a culture that pre-supposes the Grecian-Judeo-Christian concept of man and reality – which is at odds with Eastern pre-suppositions of man and reality.