A friend posted the picture and statement regarding the soul… I thought it an opportunity to respond, here. 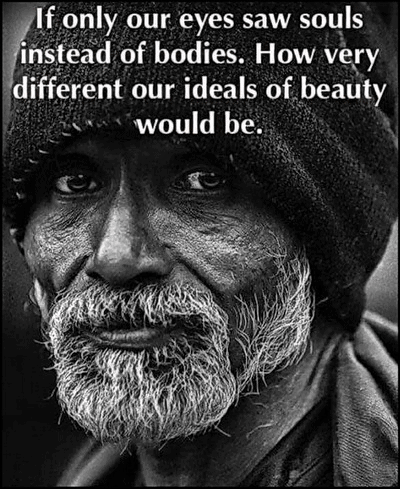 I SORTA agree with that statement in the pic. While the picture is riveting, and I believe in the soul… I assume many who do not adhere to the Judeo-Christian philosophy do not, or do not realize well WHAT they believe. I will explain. All of the world’s 10,000+ religions break down into seven worldviews at most…

While many have a belief in the soul, the only worldview that holds the “self” resides in and continues on 𝐼𝑁 the soul is Theism. While neo-Pagans (like Wiccans) believe the soul goes through reincarnations – similar in some respect to Pantheists – in the end, we see that all this we experience is an illusion. Here, for instance, is a conversation I had with a ZEN apologist (this is taken from my 2nd chapter in my book):

Does the idea of “violence” as a moral good or a moral evil truly exist in the Buddhist mindset? What I mean is that according to a major school of Buddhism, isn’t there a denial that distinctions exist in reality… that separate “selves” is really a false perception? Language is considered something the Buddhist must get beyond because it serves as a tool that creates and makes these apparently illusory distinctions more grounded, or rooted in “our” psyche. For instance, the statement that “all statements are empty of meaning,” would almost be self refuting, because, that statement — then — would be meaningless. So how can one go from that teaching inherent to Buddhistic thought and say that self-defense (and using WWII as an example) is really meaningful. Isn’t the [Dalai] Lama drawing distinction by assuming the reality of Aristotelian logic in his responses to questions? (He used at least three Laws of Logic [thus, drawing distinctions using Western principles]: The Law of Contradiction; the Law of Excluded Middle; and the Law of Identity.)  Curious.

THEY CALL HIM JAMES URE, RESPONDS:

You’re right that language is just a tool and in the end a useless one at that but It’s important to be able run a blog. That or teach people the particulars of the religion. It’s like a lamp needed to make your way through the dark until you reach the lighthouse (Enlightenment, Nirvana, etc.) Then of course the lamp is no longer useful unless you have taken the vow to teach others.  Which in my analogy is returning into the dark to bring your brothers and sisters along (via the lamp-i.e. language) to the lighthouse (enlightenment, Nirvana, etc.)

So even the act of loving others, therefore, is inconsistent with what is taught in the Buddhistic worldview, because there is “no one to love.” This is shown quite well (this self-refuting aspect of Buddhism) in the book, The Lotus and the Cross: Jesus Talks with Buddha. A book I recommend with love, from a worldview that can use the word love well.  One writer puts it thusly: “When human existence is blown out, nothing real disappears because life itself is an illusion. Nirvana is neither a re-absorption into an eternal Ultimate Reality, nor the annihilation of a self, because there is no self to annihilate. It is rather an annihilation of the illusion of an existing self. Nirvana is a state of supreme bliss and freedom without any subject left to experience it.”

MY FINAL RESPONSE AFETR NO RESPONSE

I haven’t seen a response yet. Which is fitting… because whom would be responding to whom? Put another way, would there be one mind trying to actively convince the other mind that no minds exist at all?

Here’s another way to see the same thing, Dan Story weighs in again:

[The above beliefs found in neo-Pagan, Pantheism, Panentheism affects the idea of “beauty” as well]

So many belief systems struggle with the reality of a soul of a “person.” People who just believe it to be the case live in the West and have been influenced through Western culture that has come through the stream of Jerusalem, Athens, and Rome.

In other words, for someone to say “if they could see the soul” are assuming a Judeo-Christian construct that they may not adhere to. They are “borrowing” something that they like from one religion and “quilting it together” illogically with another belief. The two cancel each-other out. Logically speaking.

It SOUNDS nice though.