In a video detailing progressive thinking, at the 4:50’ish point (← right click and “open in another tab” in order to start from this point) there is a good example of some of the vacuous responses to positions by the Left. One is the response “to read a book.” This was JUST done with a Twitter conversation I was in via my bumper sticker for my site: 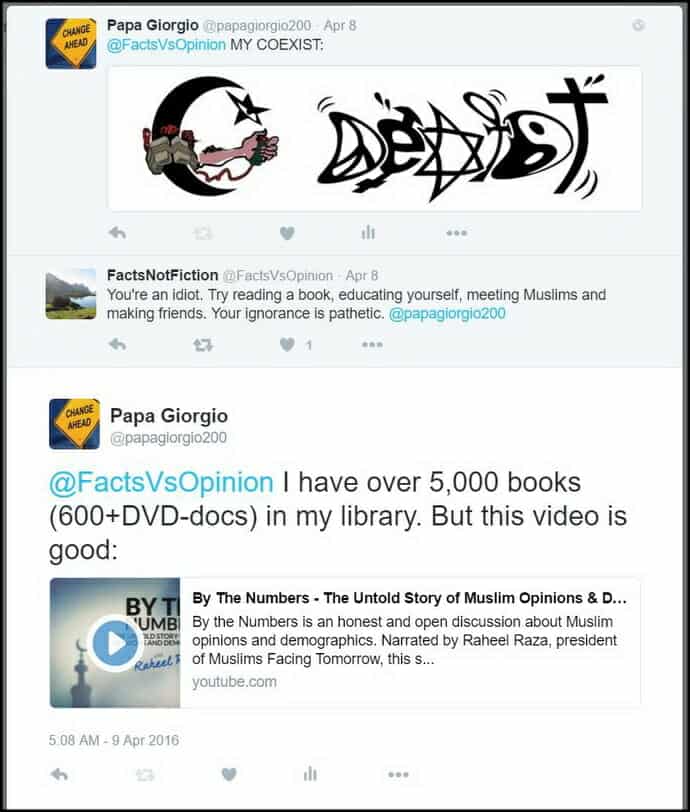 Here is my response for the record:

I just had a SJW woman tell me to “read a book,” funny. I have written a book and have over 5,000 in my home collection:

➤ politics [spanning the views];
➤ religion [all major world religious texts and many obscure cults and occult texts];
➤ economics [from common sense to Keysian junk];
➤ U.S. civics/poli-sci;
➤ history [world and U.S., most Marxist historians — like Chomsky and Zinn, as well as actual historians — like Paul Johnson, Thomas Sowell, and Rodney Stark];
➤ philosophy [from the Greeks — my Favorite is Cicero, to modern atheists defending atheism and theists defending belief. I have all or most of (for example) the published of multimedia material from: R. Dawkins, K. Nielsen, D. Dennett, Sartre, Camus, Nietzsche, S. Harris, M. Martin, L. Wolpert, D. Barker, W. Provine];
➤ comparative-religions [worldviews study as well as applying internal Aristotelian tests to the coherence of a belief structure];
➤ origin studies [the creation vs. evolution debate or the intelligent design vs. naturalism divide… I have most counter views published that differ with my own view];
➤ science [I collected all the biology, chemistry, and physics text books from my kids going through all their schooling ~ grade school to college, etc];
➤ Biblical studies [I have all the resources, dictionaries, maps, languages (Greek and Hebrew), Near-East and Persian history… history regarding manuscripts, the Gnostic Gospels, Old-Testament and New Testament surveys, systematic theology, church history, etc., etc.];
➤ As an aside, I also own 600+ DVD documentaries and debates (on the same topics as above). However, about 200 of these are debates between pro-and-con holders of the above topics. Many are formal debates at Yale, Harvard, and other major State universities.

Comparing, contrasting, and hearing fairly both sides without merely labeling people is important to make informed decisions in this life that are meaningful and direction oriented. You get the point… the person that told me to read a book was merely emoting nervousness at defending an idea void of any deep thought.