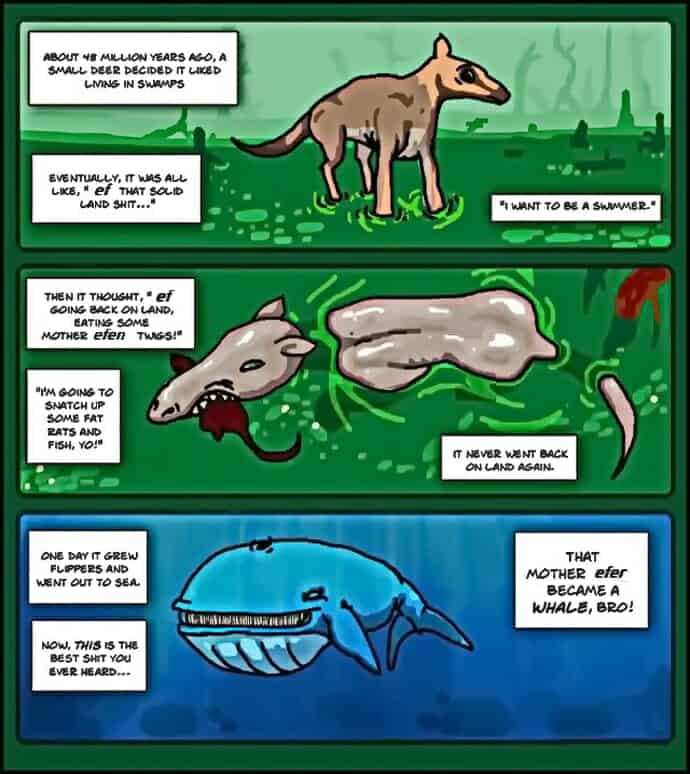 (For a great introduction to the below video of which the following is a clip from, see Evolution News & Views)

More About the Male (Whale’s) Refrigeration System ~ The system actually works better when the whale swims hard. How can that be, when the testes are located right between the abdominal swimming muscles? It’s like trying to keep a refrigerator cold between two furnaces.

It works because the blood pumps harder during exercise, allowing more heat to escape into the water through the dorsal fin and tail. The higher volume of cool venous blood then enters the “miraculous web” (Latin rete mirabile, read more here) between the abdominal muscles, where the heat from the arteries is transferred to the cooler veins before entering the testes. It’s a marvelous solution: a “counter-current heat exchanger” (CCHE) mechanism.

As Richard Sternberg and Paul Nelson explain in the film, without both internal testes and the refrigeration mechanism existing simultaneously, natural selection would halt, and whales would have gone extinct. Females, too, have a CCHE to protect the young during pregnancy. Similar CCHE systems are found in other marine mammals such as manatees and seals, providing more unlikely examples of “convergent evolution.”

One of the key (most complete) missing link in this WILD scenario is Rodhocetus. Rodhocetus’ discoverer, Dr. Phil Gingerich, one of the leading experts on whale evolution, promoted the idea that Rodhocetus had a whale’s fluke (tail) and flippers. Later Dr. Gingerich admitted,

When asked about the missing fluke, Dr. Gingerich replied,

Without this fossil, there is no evolutionary story telling like we see in this WHALE OF A TALE:

Will museums and textbooks change their displays or portraits Rodhocetus as a transitional fossil? Don’t hold your breath. 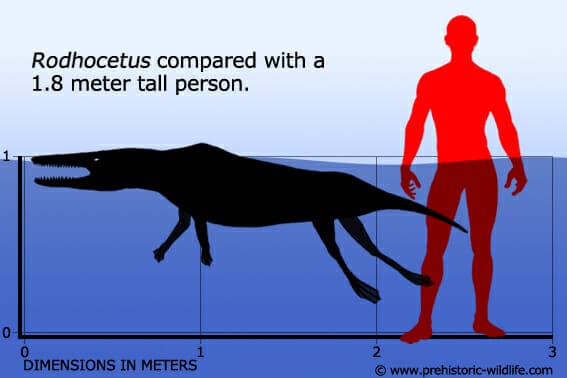 Here we get into the weeds with these fraudulent Plaster of Paris replicas for the myriad of students visiting natural history museum. The excerpt here comes from Uncommon Descent:

If you can’t find a missing link, just make one up with plaster and body parts and put it in museums. I don’t think the deception was deliberate in as much as it was self-deception and they just added plaster to conform a land fossil to look like a whale.

The two scientists who found the lion’s share of walking whale fossils essentially created the best fossil proof of evolution using plaster models and drawings and supplied these to museums and science magazines. In each case, they started with incomplete fossils of a land mammal. Whenever a fossil part was missing, they substituted a whale body part (blowholes, fins and flukes) on the skeletal model or skull that they distributed to museums. When these same scientists later found fossils negating their original interpretations, they did not recall the plaster models or drawings. Now museums are full of skulls and skeletons of ‘walking whales’ that are simply false.” Dr. Werner went on to say, “I suspect some curators are not aware of the significance of these substitutions nor are they aware of the updated fossils. Museums should now remove all of the altered skeletons, skulls and drawings since the most important parts of these ‘walking whales’ are admittedly made up. Museums will also have to delete these images from their websites as they are misleading the public.” –

Here is an example of my child’s biology textbook from grade school (enlargeable by just clicking the image ~ for maximum enlargement, right click with the mouse and choose, “open link in new tab“): 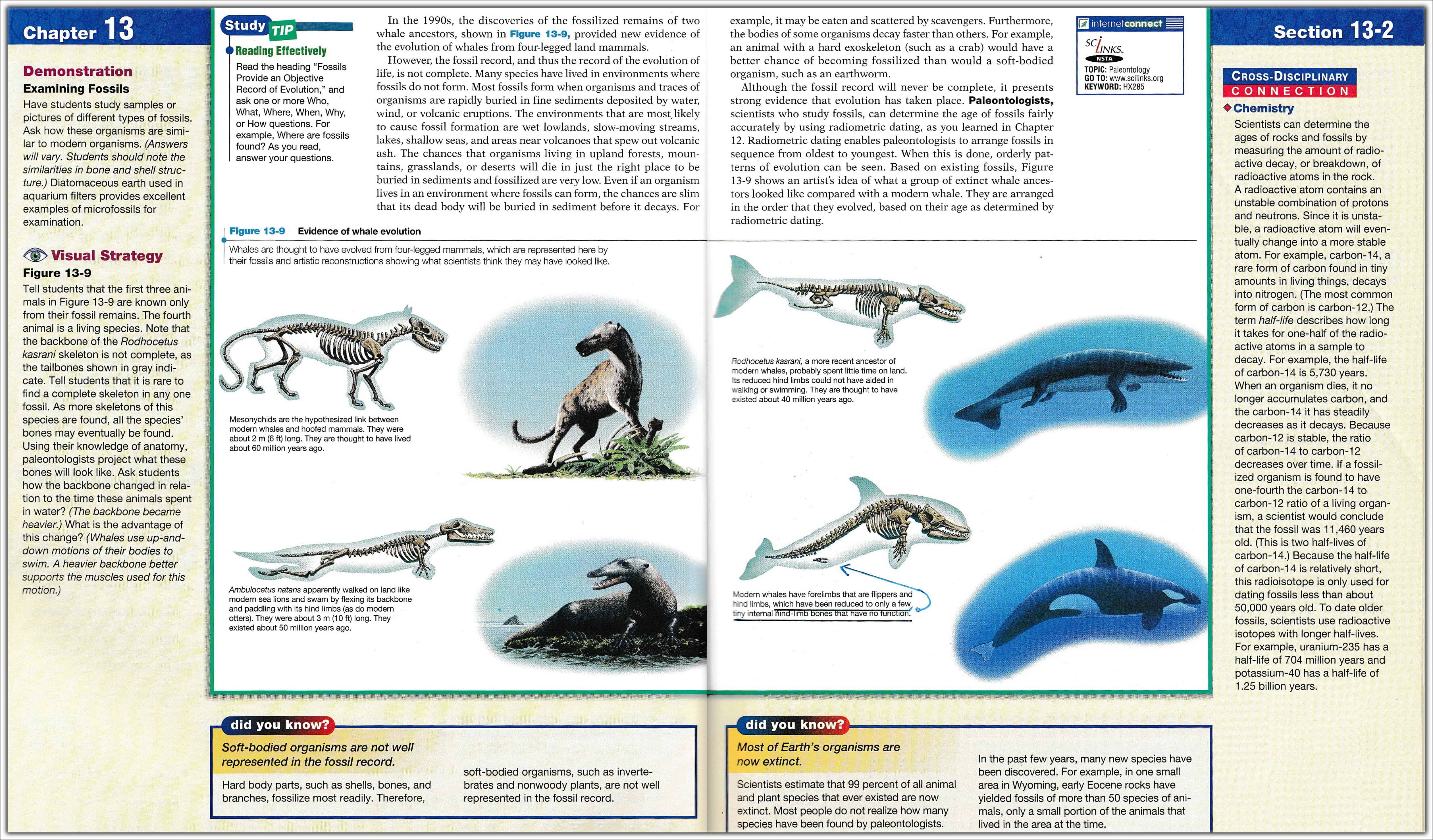 The “pelvic bones” in whales are said to be vestigial. Here is another example from my son’s public schooling:

Many organisms have features that seem to serve no useful function. For example, humans have a tailbone at the end of the spine that is of no apparent use. The human appendix, a small, fingerlike projection from the intestine, also has no known function. Some snakes have tiny pelvic bones and limb bones. Whales also have pelvic bones, along with a four-chambered stomach like that of a cow.

So what sort of evolutionary clues can vestigial features provide? Consider that normal sperm whales, like all whales, have small pelvic bones but no hind legs. A very small percentage of sperm whales, how­ever, have vestigial leg bones, and some sperm whales even have bone-supported bumps protruding from their body.

Whales probably are descended from an ancestor that lived on land. In the whales’ genome, many of the genes needed to make hind legs have been conserved, or have remained unchanged. In normal whales, the genes for hind legs are turned off. In rare cases, however. the genes are partially turned on, and vestigial hind legs form. Thus. whales and other living things may display their evolutionary history in the usually unexpressed genes they carry.

Here, Philip Cunningham fills in what these “vestigial” bones are used for via a couple examples, the first being an Email Exchange regarding “vestigial legs” pelvic bones in whales:

The pelvic bones (supposed Vestigial Legs) of whales serve as attachments for the musculature associated with the penis in males and its homologue, the clitoris, in females. The muscle involved is known as the ischiocavernosus and is quite a powerful muscle in males. It serves as a retractor muscle for the penis in copulation and probably provides the base for lateral movements of the penis. The mechanisms of penile motion are not well understood in whales. The penis seems to be capable of a lot of independent motion, much like the trunk of an elephant. How much of this is mediated by the ischiocavernosus is not known.

In females the anatomical parts are smaller and more diffuse. I would imagine that there is something homologous to the perineal muscles in man and tetrapods, which affect the entire pelvic area – the clitoris, vagina and anus.

The pelvic rudiments also serve as origins for the ischiocaudalis muscle, which is a ventral muscle that inserts on the tips of the chevron bones of the spinal column and acts to flex the tail in normal locomotion.

This second example comes by way of PHYS.ORG and like all other vestigial organs, the “Darwinism-of-the-gaps” is proven to be vacuous:

Both whales and dolphins have pelvic (hip) bones, (supposed) evolutionary remnants from when their ancestors walked on land more than 40 million years ago. Common wisdom has long held that those bones are simply vestigial, slowly withering away…

New research from USC and the Natural History Museum of Los Angeles County (NHM) flies directly in the face of that assumption, finding that,, pelvic bones serve a purpose…

“Everyone’s always assumed that if you gave whales and dolphins a few more million years of evolution, the pelvic bones would disappear. But it appears that’s not the case,”….

The muscles that control a cetacean’s penis – which has a high degree of mobility – attach directly to its pelvic bones….

The Smithsonian Institute has and article on this as well… the title is illuminating:

I thought this was a telling commentary in the article:

Testing any of this in the field is near impossible—for now, there’s no way to x-ray whales having sex underwater to reveal the inner workings of their anatomy. All the researchers can do at this point is speculate.

My only question would be…

…why this “speculation” wasn’t applied to the previously held position that these bones are vestigial.