…Unfortunately, despite Attenborough’s despicable attempts to yank on heartstrings, the population of dangerous polar bears is not falling.

The actual victims here are children young enough to take this crap seriously; ecoanxiety can be a serious psychiatric disorder, as Greta Thunberg demonstrates.

Hoo Boy… now Netflix and other Media and environmental orgs are saying Walruses are a proof of Global Warming… except… this phenomenon has been observed for a long, long time. And IS NOT NEW like shown in popular media:

…Hype from the *Netflix/Attenborough ‘climate change is gonna destroy the world’ fearmongers earlier this year notwithstanding – or the media this summer trying to stir up climate change fever – the US Fish and Wildlife Service determined in October 2017 that the Pacific walrus is not being harmed by climate change and is not likely to be harmed within the foreseeable future (USFWS 2017). The IUCN Red List (2015) lists the Pacific walrus as ‘data deficient‘.

Large herds onshore are a sign of population health, not climate change, and walruses have come ashore in the Chukchi Sea during the ice-free season in summer and/or fall for more than 100 years (Crockford 2014; Fischbach et al. 2016; Lowrey 1985). Those are the relevant scientific facts….

Dr Susan Crockford explains why the media coverage and statements by scientists and environmental organisations mislead people about the massive walrus haulout seen in Sept/October 2014. Read Susan Crockford’s paper, which refutes claims that Arctic walruses are in distress and danger due to global warming at: On The Beach: Walrus Haulouts Are Nothing New (PDF)

I had an opportunity last night to watch the original Netflix ‘Frozen Worlds’ walrus episode and have some addition thoughts.

One big eye-opener was the final shot of the walrus sequence: a polar bear approaching from the water to feed on the carcasses below the cliff at Cape Kozhevnikov. This is additional proof that polar bears were in the area while the crew were filming. Yet the narrative in the film was silent on the risk to walruses on the cliff from polar bears and not a word was spoken of the hundreds of walruses that had fallen off that very cliff just days before after being spooked by approaching bears.

Oddly, I have also discovered that the Russian scientific advisor to the film, Anatoli Kochnev, wrote a scientific report in 2002 (translated into English) on walrus deaths at two regularly used beach haulouts on Wrangel Island from 1989-1996, when walrus population numbers were much lower than today and summer sea ice extent was higher (Kochnev 2002). He concluded that stampedes initiated by polar bears were responsible for most of the walruses found trampled to death.

This means Kochnev knew that polar bears nearby were a huge risk factor for walrus stampedes over the cliff but went along with the official ‘Our Planet’ narrative that no polar bears were involved and only lack of sea ice and poor eyesight were to blame for the carnage presented in the Netflix film.

In addition, a Google-translated photo-essay published by Kochnev’s friend Yevgeny Basov who had been invited to witness the spectacle at Cape Kozhevnikov in the fall of 2017 (posted 11 November 2017, original link here)(h/t WUWT commenter “it doesn’t add up”). The metadata on the photos in this essay shows that Kochnev was there on 16 Septmber 2017 (photo #2) and that walruses were already dying from falls off the cliff on 17 September (photo #22, see below), two days before the ‘Our Planet’ footage was shot.

This is almost certainly the event reported in The Siberian Times, when 20 polar bears were said to have spooked walruses at the top of the cliff, with hundreds fell to their deaths on the rocks below….. 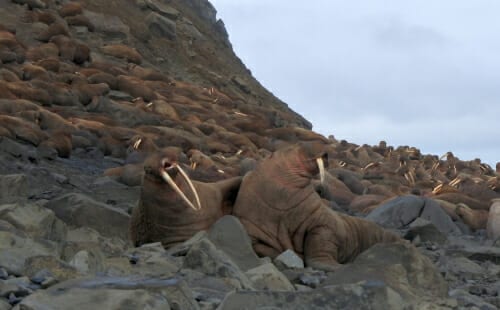