S.E. Cupp @secuppRomney:”I’ve got 5 boys. I’m used to people saying the same thing over and over again hoping it becomes true.”

Andy Levy:I feel like Lehrer is about 15 minutes from turning into Michael Douglas in “Falling Down”

David Burge @iowahawkblog (5-Tweets combined)23 minutes to go. At this point Romney can probably get a Jimmy John’s, and feed it to Ann’s dressage horse while kicking a dog. I heard about something like this that happened between Sonny Barger and a mouthy guy from the Mongols in Oakland in ’65. Not pretty. Next debate, Romney should have Biden sub for him, then just sit in a folding chair next to the podium smoking a cig and filing his nails. In fact, Romney should walk past Obama in a bathobe & Speedo, grab a cup of coffee, walk back to a Laz-Z-boy and watch Cartoon Network. Then, Romney should shave, splash on some Old Spice, and do some benchpresses. 130, 140, nothing big. 10 to 15 reps.

David Burge @iowahawkblog“Hi, Jay-Z? Next president here. R-Money. How much for that 18 foot tower of champagne? I’ll be needing it.” Romney, on big 80’s cell phone

David Burge @iowahawkblogIf I were Romney, I would put on a top hat ‘n’ monocle, call a Swiss bank, then thwack a street urchin with my diamond tip swagger stick.

Jonah Goldberg:Congratulations MSM, your failure to ask the president hard questions for 4 years has left him soft and unprepared. #irony

Tammy Bruce:OMG Mittens is reminding me of Reagan!!!

Dennis Miller @DennisDMZArthur Conan Doyle’s Lestrade had more of a clue than Obama.

DanRiehl @DanRiehlOof. Mr. President, you’re entitled to your own airplane and house but not your own facts

GregGutfeld @greggutfeldObama cant look at Romney. Shame. He might learn something.

GregGutfeld @greggutfeldObama, spoiled by those fearful of hurting his feelings, have left him in the desert.

Dennis Miller Show @DennisDMZShows over, folks, nothing to see here, shows over.

Bill Maher @billmaherObama made a lot of great points tonight. Unfortunately, most of them were for Romney

Tammy Bruce @HeyTammyBruceObama’s closing statement sounds like its taken from a mix of those magnetic words on the fridge.

Dennis Miller Show @DennisDMZObama says “and, and, and” just like Dustin Hoffman coming down the stairs at the end of “Tootsie”. He’s making it up and it’s not working.

Mark Hemingway @HeminatorThat wasn’t a debate so much as Mitt Romney just took Obama for a cross country drive strapped to the roof of his car.

David Burge @iowahawkblogPoor guy, couldn’t get it up on his anniversary.

Dennis Miller Show @DennisDMZImagine having Joe Biden as a firewall.

David Burge @iowahawkblogRemember when they found out about Milli Vanilli? Yeaahhp. Pretty much that.

GregGutfeld @greggutfeldwatching MSNBC discuss the debate is like watching the Titanic discuss the iceberg.

Kurt Schlichter @KurtSchlichterObama may look constipated, but after that hollowing out, Obama isn’t never going to have a problem with being constipated again.

Erick Erickson @EWEricksonNote that Stephanie Cutter is on TV now using, word for word, talking points she sent out at 9AM!!!

RJ Moeller @rjmoellerTonight was so bad for the president, we’re getting word he just inked a deal to write two books about it #DebatePrepFromMyFather

toddstarnes @toddstarnesLehrer — that’s what happens when you hire a government employee to moderate a debate. PBS

Erick Erickson @EWEricksonWho knew Romney’s October surprise would be mopping the floor in Denver with the President.

S.E. Cupp @secuppObama’s performance was so bad, I’m starting to think it must be some kind of strategy.

Michael MooreVerified @MMFlintThis is what happens when u pick John Kerry as your debate coach.

Soozy @SoozyLMAO #debates AP just reported Obama was rushed to the hospital after debate where surgeons are working desperately to reattach his #ego.

Jon Gabriel @ExJonExpected spin: “Obama didn’t lose this debate to Romney, he just lead from behind.”

Derek Hunter @derekahunterNot sure who thought John Kerry would be good at debate prep for Obama. He’s not like Romney at all. Romney made his money, Kerry married it

Luke Gunderson @LukeGundyObama was almost as unprepared for that debate as he was to be President.

Erick Erickson @EWEricksonDemocrats tonight understand what Republicans have been saying all year about the polling.

John Hayward @Doc_0Biden retires to his favorite imaginary restaurant to prepare for his debate with Ryan.

Conservative Quotes @ConservativeQuo@noltenc Romney not only destroyed Obama, he destroyed the MSM’s caricature of him. Much more important.

Bill Maher @billmaherthat president Obama sure is smart, but i’m not sure if i’m gonna take his class next semester

John Nolte @NolteNCLike he did for his book, Obama should have Bill Ayers stand in for him with this next debate.

mike murphy @murphymikeHere in liberal Santa Monica. Liberals here so mad they may take to the streets and try to set a Prius on fire…

David Burge @iowahawkblog“Romney was too vague. He needed to give more details, like the President’s two point Hope-Change program.”

@ebhimmel:
Perhaps Obama would’ve won the debate if he ended it walking thru crowd with a bucket of birth control pills 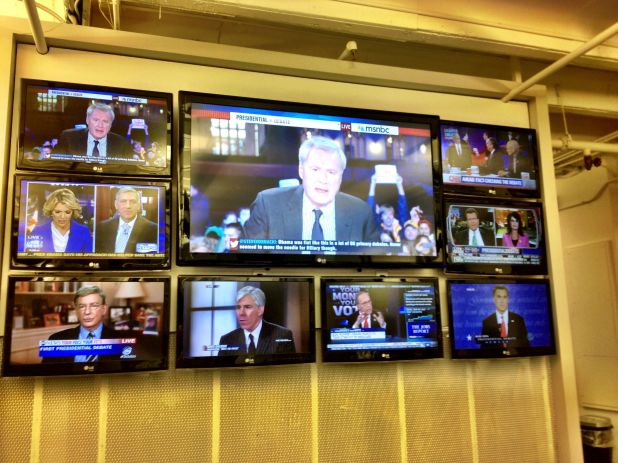