“When a Man stops believing in God he doesn’t then believe in nothing, he believes anything.” ~ G. K. Chesterton

You can no-more change species than you can change gender/sex… sorry to break that to you. And if you are against this in society… are you a TransSpecie’ist? Are Specieaphobic?

This come via MOONBATTERY... rightly so:

FRONTPAGE MAGAZINE has this article about the movement:

IF BRUCE JENNER IS A WOMAN…

NANO IS A CAT!

You see, no matter how much surgery you get… you will never become a dragon (removing ears and altering the nose), JUST LIKE a man can never become a woman through mutilating the gentiles. GAY PATRIOT notes a very funny “work-rights” issue if this person is hired, after quoting “it”

So, does this mean that businesses will be required to provide this creature with a sunny rock to warm itself in the afternoon sun on? Will states that exempt businesses from having to cater to this be subject to boycotts in services of the LGBQTAR (As in ‘Reptilian’) coalition of the perpetually aggrieved? 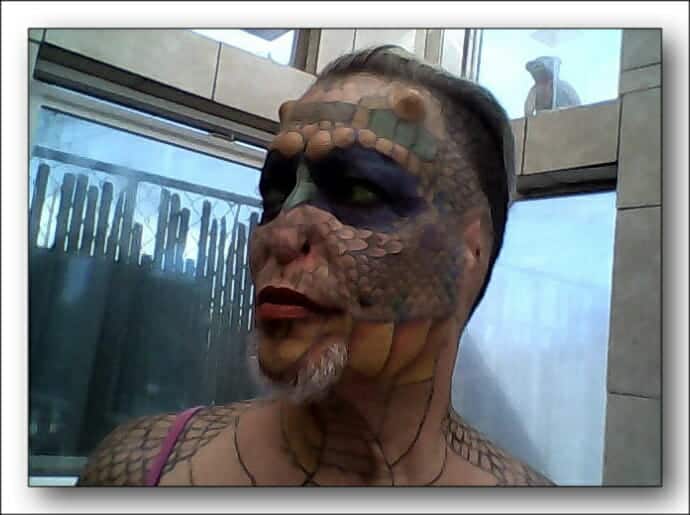 A person at GP brought up “THE STALKING CAT“ guy in the comments section. Here is the comment: 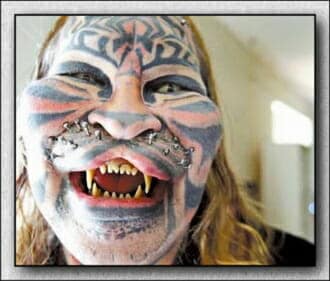 I met and talked with him. Very nice guy. He fortunately paid for all of his body modifications himself, and did not ask the government to provide that for him. He made no excuses, nor did he expect anyone to address him in special ways or give him special treatment or accommodations.

In other words, the body modifications did nothing to improve his self-image.

And this is a point made on my TRANSGENDER PAGE, nothing these people do change their quality of life, and in most cases the suicide risk increases.

Not to be outdone, this “person” self identifies as a… wait for it… a

This story comes from NEWSBUSTERS, I add some TWEETS:

If normal radical liberals in Big Tech weren’t bad enough, Twitch has named a transgender streamer who self-identifies as a deer to be on the platform’s “Safety Advisory Council.”

Steph “FerociouslySteph” Loehr who is listed as a “Professional Community Leader” with the Anti Defamation League (ADL) now serves as a member on Twitch’s Safety Advisory Council. The council, according to Protocol’s May 15 newsletter is “made up of eight members: a mix of academics and professionals with online safety expertise, plus a few Twitch creators.”

Loehr could be seen in a variety of disturbing clips. In one, Loehr wore antlers while broadcasting and explained: “In my spare time, I go out to my yard, and I, and I prance around. And I eat grass.” While explaining this, Loehr mimed eating grass and described how “it helps me feel, like, in tune with my deer-self.”

what the fuck is going on pic.twitter.com/ZZbof5uUw5

Culture/Tech commentary news outlet Sausage Roll explained that the “otherkin” phenomenon is a subculture “who socially and spiritually identify as not entirely human.” It added that “Some otherkin claim that their identity is genetic, while others believe their identity derives from reincarnation, trans-species dysphoria of the soul, ancestry, or metaphor. In Steph’s case, the Twitch admin identifies as a deer.”

In another clip, Loehr could be seen making strange noises while another individual scratched Loehr’s head. Loehr also warned in a clip that “I have power,” and that “there are some people that should be afraid of me. And that they are, because I represent moderation and diversity, and I’m gonna come for hurtful, harmful people. If you’re a really shitty person, I’m going to stand up against you. Period. And Twitch has endorsed me to do that.”

The ADL describes Loehr as “Transgender, and an advocate for authenticity, challenging herself and others to find and express truth through vulnerability” on its website….

I UP YOUR CATs/WOLVEs/REPTILEs/ and DEERs WITH…

Here is another “trans-species” story of a man who identifies as an elf. The story is from MOONBATTERY:

If Bruce Jenner is a woman, then Luis Padron is an elf:

Luis Padron, 25, from Buenos Ares, Argentina, became obsessed with the world of elves, angels and fantasy beings after being bullied as a child.

He became determined to look like his favourite otherworldly characters and started bleaching his hair and skin.

He has almost spent more than £25,000 on surgery including liposuction on his jaw, a nose job, full body hair removal and operations to change his eye colour.

Mr Padron gets unusual looks but says he doesn’t care what people think and said he won’t stop until he has fully ‘transformed’ into an elf.

He is planning surgery to make his ears pointed, hair implants for a heart-shaped hairline and a limb lengthening operation to make him 6ft 5in tall.

His to-do list also includes muscle implants and the removal of four ribs to make his waist thinner.

“I consider myself trans-species, in the same way transgender people feel, I need to become how I feel inside…”

Here is a recent story via THE DAILY MAIL:

‘It’s Not About The Ears, It’s About Who You Are’: ‘Transpecies’ Woman Who Identifies As An Elf Speaks Of Life As An ‘Otherkin’ – Leaving GMB [Good Morning Britain] Viewers Wondering If It’s A Late April Fools Joke

A woman who is ‘transpecies’ and identifies as an elf divided viewers after appearing on Good Morning Britain today.

Kimberel Eventide, from Chicago, says she is an elf trapped in a human body and identifies as an ‘Otherkin’ – a term coined to described those who feel a connection to mythical creatures and do not deem themselves entirely human.

Speaking to Piers Morgan and Susanna Reid today, Ms Eventide revealed how she connected with J R R Tolkien’s characters after reading The Lord of the Rings.

But she divided opinion among viewers, with some praising her beliefs and others questioning whether the interview was a ‘late April Fool’s joke.’…..