(Originally posted October 2011, the 2nd reposting was when Vincent Bugliosi died in June 2015. I am reposting this March of 2022 to update the media in the post.)

I am re-posting this because Vincent Bugliosi just passed away. He was a legend in his field who wrote many good books. But even smart people say DUMB things.

I was surprised in listening to Vincent Bugliosi in an interview about his book, Divinity of Doubt: The God Question. Surprised because considering his book on debunking pretty much every JFK conspiracy known to man, I would expect him to realize his fundamental mistake that taints his whole view.

So when I heard Mr. Bugliosi quote Gertrude Stein as part of his definition of agnosticism…..

…. I immediately knew he was a second rate skeptic churning every old cliché over again for a new generation.

So here we should define for the layman what an agnostic is and why some say that there are two kinds… one being indistinguishable from an atheist.

✓ Atheism: The belief that there is no God. This is typically the conviction that there is no personal Creator of the universe, and no powerful, incorporeal, perfect being in heaven or anywhere else. 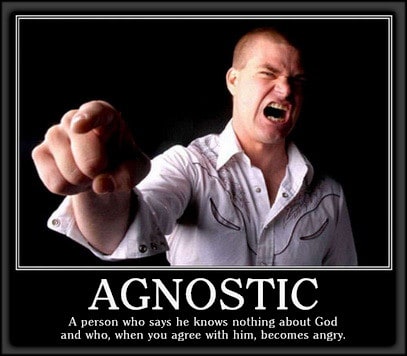 But what about what Vincent Bugliosi said about the impossibility of knowing?

Does he know this possibility?

Let me show how his position is self refuting, incoherent, and illogical. This comes from my “chapter” via my “book” on Reincarnation vs. the Laws of Logic (references at linked chapter):

….To begin, pantheists claim that God is unknowable because it [God] is above and beyond human logic. In other words, we are told that we cannot intellectually comprehend God because he is beyond all understanding. However, this is nonsensical and self-defeating statement. Why? “Because the very act of claiming that God is beyond logic is a logical statement about God.” Also, to say that we cannot know or comprehend God, as do the agnostics, is to say that we know God. How? I will answer this with a response to agnostic claims by the associate professor of philosophy and government at the University of Texas at Austin:

To say that we cannot know anything about God is to say something about God; it is to say that if there is a God, he is unknowable. But in that case, he is not entirely unknowable, for the agnostic certainly thinks that we can know one thing about him: That nothing else can be known about him. Unfortunately, the position that we can know exactly one thing about God – his unknowability in all respects except this – is equally unsupportable, for why should this one thing be an exception? How could we know that any possible God would be of such a nature that nothing else could be known about him? On what basis could we rule out his knowability in all other respects but this one? The very attempt to justify the claim confutes it, for the agnostic would have to know a great many things about God in order to know he that couldn’t know anything else about him.

You see, Mr. Bugliosi is denying that you know, which means he REALLY KNOWS… which is self defeating.

You can see in this mock conversation how this woks out:

Teacher: “Welcome, students. This is the first day of class, and so I want to lay down some ground rules. First, since no one person has the truth, you should be open-minded to the opinions of your fellow students. Second… Elizabeth, do you have a question?”

Teacher: “No, I don’t. Are you claiming to know the truth? Isn’t that a bit arrogant and dogmatic?”

Elizabeth: “Not at all. Rather I think it’s dogmatic, as well as arrogant, to assert that no single person on earth knows the truth. After all, have you met every single person in the world and quizzed them exhaustively? If not, how can you make such a claim? Also, I believe it is actually the opposite of arrogance to say that I will alter my opinions to fit the truth whenever and wherever I find it. And if I happen to think that I have good reason to believe I do know truth and would like to share it with you, why wouldn’t you listen to me? Why would you automatically discredit my opinion before it is even uttered? I thought we were supposed to listen to everyone’s opinion.”

Teacher: “This should prove to be an interesting semester.”

Another Student: “(blurts out) Ain’t that the truth.” (Students laugh)

Do you see? After listening to Bugliosi himself do you understand where he went wrong? If you are a person who thinks like Bugliosi, may I posit that you are just as dogmatic as the most dogmatic atheist.