LIVE ACTION provides us with this update to this mantra:

The following is via Godfather Politics:

…Let’s get back to the 3%-defense. The following is from National Review Online:

“Practically every defender of the organization, fighting to preserve its federal funding, reverts to the 3 percent figure. How could you possibly, they ask, defund a group that devotes itself overwhelmingly to uncontroversial procedures and services for women?

“The 3 percent figure is derived by counting abortion as just another service like much less consequential services. So abortion is considered a service no different than a pregnancy test (1.1 million), even though a box with two pregnancy tests can be procured from the local drugstore for less than $10.”

“By Planned Parenthood’s math, a woman who gets an abortion but also a pregnancy test, an STD test, and some contraceptives has received four services, and only 25 percent of them are abortion [related]. This is a little like performing an abortion and giving a woman an aspirin, and saying only half of what you do is abortion.”…

The 3 percent figure that Planned Parenthood uses is misleading, comparing abortion services to every other service that it provides. The organization treats each service — pregnancy test, STD test, abortion, birth control — equally. Yet there are obvious difference between a surgical (or even medical) abortion, and offering a urine (or even blood) pregnancy test. These services are not all comparable in how much they cost or how extensive the service or procedure is.

While Planned Parenthood has no legal obligation to make its data more public, it is unfortunate that the public has limited access to data about the organization. Planned Parenthood could end the speculation–and Pinocchios–by providing a more transparent breakdown of its clients, referrals and sources of revenues.

Earlier this week, I read a terrific post with this spot-on headline, “There’s no cover for Planned Parenthood anymore.” The reference was to the deeply disturbing truths unveiled by a series of six undercover videos filmed by the Center for Medical Progress, which has caused “cracks” in the “edifice.”

But it could have included a myriad of other examples of how Planned Parenthood is in deep, deep trouble. On Monday, for example, NRL News Today wrote about the hit PPFA’s public image has taken. All of a sudden PPFA doesn’t seem so invincible.

And then, lo and behold, in today’s Washington Post, the newspaper’s Fact Checker dissected one of PPFA’s most egregiously misleading claims. The headline? “For Planned Parenthood abortion stats, ‘3 percent’ and ’94 percent’ are both misleading.”

The nub of the problem is that Planned Parenthood has a convoluted way of making it seem that its abortion “services” represent only a miniscule percentage of the “health services” it provides–the aforementioned 3%. That and its unwillingness to provide a detailed breakdown of its “clients, referrals and sources of revenues.”

Lee goes through a series of steps to reach this conclusion (which Dr. O’Bannon has documented in even greater detail):

The 3 percent figure that Planned Parenthood uses is misleading, comparing abortion services to every other service that it provides. The organization treats each service — pregnancy test, STD test, abortion, birth control — equally. Yet there are obvious difference between a surgical (or even medical) abortion, and offering a urine (or even blood) pregnancy test. These services are not all comparable in how much they cost or how extensive the service or procedure is….

This next portion comes from a debate I am having [had] on FaceBook, in which I pointed out the very false idea that PPH offers only 3% abortive procedures to women out of their entire health services. Planned Parent “Hood” would like you to believe this three-percent stat… but in reality they are using smoke-and-mirrors:

Here is a graphic showing that CVS almost does all the “health-care” Planned Parenthood does (click to enlarge): And from CNS News, via Conservative Women Rock!

President Barack Obama went on NBC’s “The Tonight Show with Jay Leno” on Wednesday and incorrectly claimed that the abortion-provider Planned Parenthood does mammograms, a false assertion he has made before, notably during the second presidential debate on Oct. 16.

The Food and Drug Administration (FDA), as CNSNews.com has reported, has confirmed that no Planned Parenthood facility in the United States is licensed to do mammograms.

Though Planned Parenthood claims that women depend on them for prenatal care, Live Action investigators had an incredibly hard time finding facilities that offered it—though they found plenty offering abortions. Live Action contacted all 41 Planned Parenthood affiliates where undercover recording is permitted by state law, and only 5 facilities out of 97 said they provided prenatal care.

This is a long-awaited follow-up to a similar investigation about claims from Planned Parenthood about breast-cancer screening and diagnostics. In an earlier round of debate over barring federal funds from flowing to Planned Parenthood, Barack Obama argued that cutting off funds would endanger their ability to provide mammograms, but that claim turned out to be false. PP’s executives also claim that “one in five women depend on Planned Parenthood for health care,” which FactCheck.org demonstrated was way, way off; it’s closer to one in 30, and they offer no unique services that women can’t find at other clinics — except abortions.

Still, the sourcing on the start of the video looks a little thin, so it behooves people to check the Planned Parenthood website. Sure enough, they have a portal for pre-natal care, and a big button to click labeled “Find A Health Center & Book An Appointment.” However, the next page is their standard clinic search page, and it might be tough to spot that the term “pre-natal care” does not appear on the list of services provided by their clinics. It does list “Pregnancy Testing & Services,” but what exactly does that comprise? It’s not pre-natal care at most of these clinics:

The only mention of pre-natal care on the Tempe, AZ website (where the first call is placed) is this: “If you choose to continue a pregnancy, we will provide you with a list of resources to help you obtain prenatal care.”…

CHICKS ON THE RIGHT join the chorus as well:

The next time you hear some feminist in a pink hat screaming about how Planned Parenthood is the ONLY place for women to get care, just remember that Care=Abortion. And pretty much nothing else.

We already know that Planned Parenthood doesn’t actually do mammograms (that tidbit came from Cecile Richards’s own mouth, no less). And for all their talk of providing “women’s healthcare” – the more evidence that actually comes out, the more we see that they don’t do much of that either. Providing abortions is where their bread is buttered and that’s what they focus on. Even to the point where they push pregnant women who simply come in for counseling to get the abortion, whether they want to or not (that was shown quite plainly in several of the Center for Medical Progress videos from a couple years ago).

A new video has just been released from Live Action. Women with the group went to 97 Planned Parenthood clinics seeking prenatal care. And of those 97 clinics, only five provided prenatal care –

The below information comes from two articles: 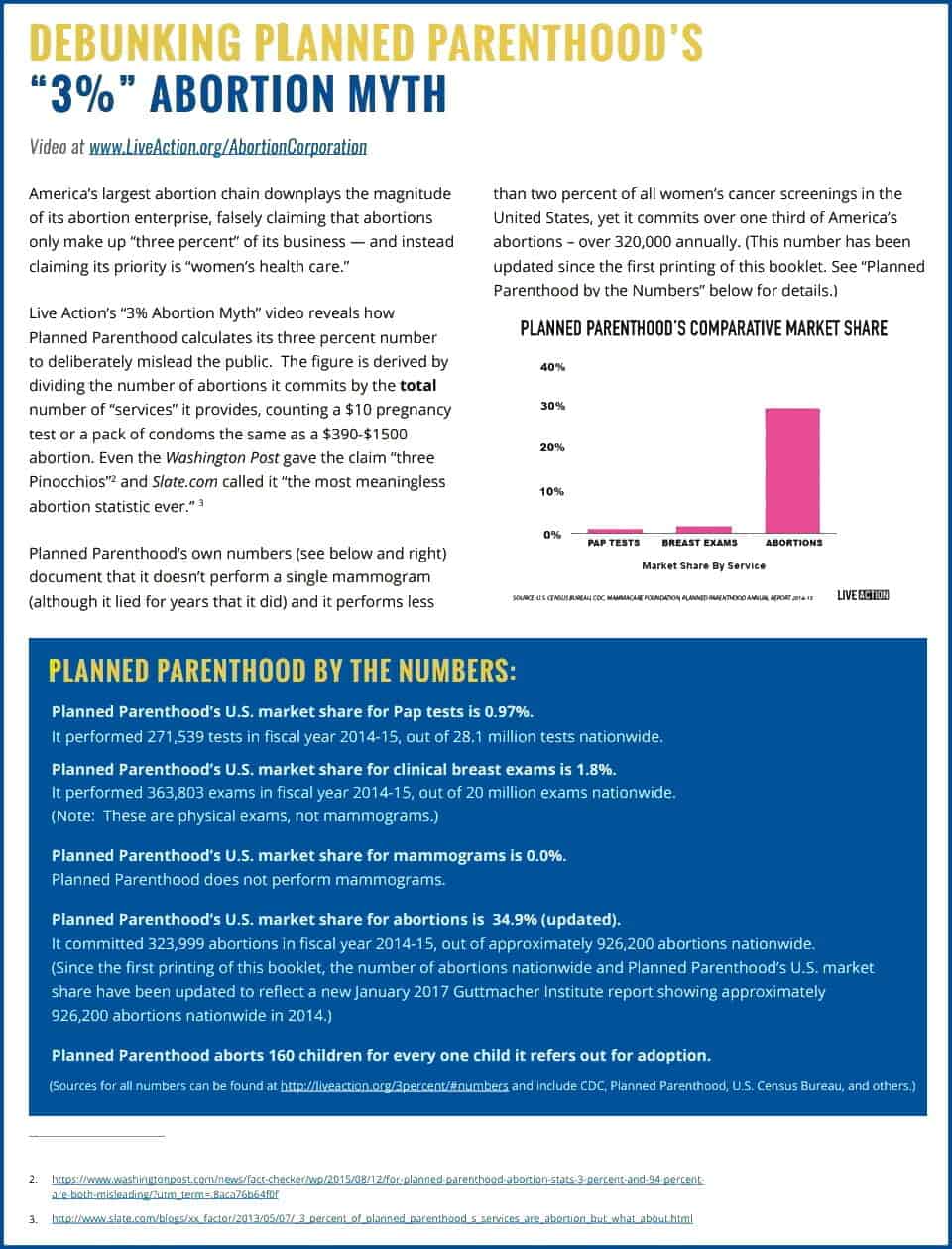 One thought on “The Planned Parenthood 3% Lie (UPDATED)”