(Via FIREARM BLOG) The Puckle Gun is one of those firearms of which only a couple of expamples exist in the world, but which is covered in a great deal of introductory firearms books, usually in their section on the history of machine guns. This has led many to assume the Puckle Gun was some kind of proto-machine gun, which isn’t exactly the case, although it is a very important historical step on the road to modern rapid-fire weaponry. Some discussion will follow below, but first, Forgotten Weapons released an installment on the partial original Puckle Gun located at Reed Knight’s Institute of Military Technology…

[ the video below is here in the Firearm Blog post ]

What makes the Puckle significant to the development of rapid fire guns? Its features. It is one of the earliest, if not the earliest breechloading guns to my knowledge that incorporates all of the following features necessary for a modern rapid-fire gun:

Previous breechloaders did incorporate one or two of these features, but Puckle’s gun combined all three to produce a true rapid-fire weapon…. 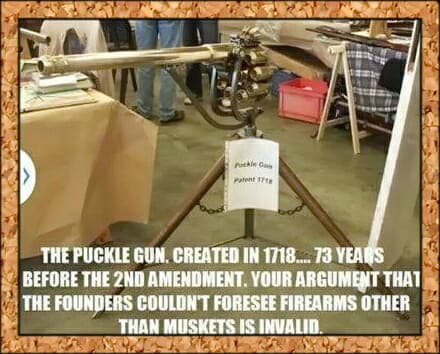 1718 the “Puckle gun” [above], the first machine gun, appeared. (One could argue that the so-called “assault rifle pre-dated the Second Amendment.) The Colt revolver followed not long after and in the late 1800s the Gatling gun, which fired 200 rounds per minute, appeared on the market. The evolution of firearms was observable during the time that the Constitution was drafted; to argue that the Founding Fathers were unaware of, or not living through, the ever-evolving capabilities of firearms is blatant ignorance of both common sense and fact. Jefferson himself was a noted collector and in letters explained what technological capabilities he favored in pieces over others in his collection. ~ The Dana Show

A transcript of the above CBS 46 presentation can be found HERE.

RED STATE continues on with this thinking:

…Prior to the Civil War, the Bill of Rights only applied to the federal government and that first Congress dropped references to “as allowed by Law” that had been in the English Bill of Rights. The Founders intended that Congress was to make no law curtailing the rights of citizens to keep and bear arms.

The 2nd Amendment, contrary to much of today’s conversation, has just as much to do with the people protecting themselves from tyranny as it does burglars. That is why there is so little common ground about assault rifles — even charitably ignoring the fact that there really is no such thing. If the 2nd Amendment is to protect the citizenry from even their own government, then the citizenry should be able to be armed.

There are plenty of arguments and bodies to suggest that we might, as a nation, need to rethink this. The Founders gave us that option. We can amend the Constitution.

In doing so, we should keep in mind that in the past 100 years Germany, Italy, Russia, Japan, China, and other governments have turned on their people at various times and, in doing so, restricted freedoms starting often with gun ownership. You may think a 30 round magazine is too big. Under the real purpose of the second amendment, a 30 round magazine might be too small.

Regardless, as the President announces how he will curtail the freedoms of the second amendment, we should remember Justice Robert Jackson’s opinion in West Virginia State Board of Education v. Barnette, 319 U.S. 624 (1943):

The very purpose of a Bill of Rights was to withdraw certain subjects from the vicissitudes of political controversy, to place them beyond the reach of majorities and officials and to establish them as legal principles to be applied by the courts. One’s right to life, liberty, and property, to free speech, a free press, freedom of worship and assembly, and other fundamental rights may not be submitted to vote; they depend on the outcome of no elections.

And the Examiner notes “Pepperbox” and “Volley Guns”

…Put whoever tries to get away with such an unsupportable wild claim on the spot by asking them to explain pepperbox revolvers, multiple barrel handheld firearms based on a concept introduced in the 15th Century, albeit they were initially fired using a match. At the time the Constitution was adopted, pepperboxes had upgraded their technology to flintlock versions, with up to seven barrels rotated by hand.

Then ask them to explain volley guns, first used in 1339.

The Founders experienced first-hand a major technological innovation that yielded a range and accuracy advantage: long guns with rifled barrels, like Kentucky and Pennsylvania rifles, had it all over British standard-issue Brown Bess smooth bore muskets…

…How many murders do you suppose these old western towns saw a year? Let’s say the bloodiest, gun-slingingest of the famous cattle towns with the cowboys doing quick-draws at high noon every other day. A hundred? More?

How about five? That was the most murders any old-west town saw in any one year. Ever. Most towns averaged about 1.5 murders a year, and not all of those were shooting. You were way more likely to be murdered in Baltimore in 2008 than you were in Tombstone in 1881, the year of the famous gunfight at the OK Corral (body count: three) and the town’s most violent year ever.

As for the traditional Western gunfight as depicted in movies, the inaccuracy of handguns at the time would have made quick-drawing skill irrelevant: It was simply so unlikely you’d hit a guy on the first, second or third shot that it didn’t really matter which guy got out his gun first. The closest history got to high-noon show downs was dueling, where people just stood across from one another with their guns out, aimed and fired until someone got lucky, and someone else was dead. Forget about “fanning,” rapidly cocking a single-action revolver between rounds like Clint Eastwood does in A Fistful of Dollars. You’d be lucky to hit a henchman if the duel took place in a closet.

Why Do We Believe It?

Because famous gunfighters like Billy the Kid wanted you to believe it. If you’ve seen Young Guns on cable, you probably know the guy was gunning somebody down every ten minutes!

Well according to sources who aren’t Billy The Kid, his lifetime kill count was four. Criminals inflated their murder stats for the same reason guys today inflate their sexual experience: It made them look cool. Towns like Deadwood talked up their violent, lawless natures in order to attract adventurous settlers. Books were written about them and movies were made as soon as cameras were invented, and nobody who’d been out west was rushing to correct the misconceptions because, why the hell would they. A century and a half later, we still love that lie…

Miss Malcolm’s Book has some startling examples of a society gone mad!

Malcolm’s book has shown me that I radically underestimated the danger of gun control. Her detailed study of British legislation on the topic shows the real aim of the disarmers. They wish to abolish the right to armed self-defense entirely. The point is not only to block armed resistance to the state, as I had previously thought; in addition, everyone is to be made totally dependent on the state for protection.

Some of Malcolm’s examples are shocking. In England “[m]erely threatening to defend oneself can also prove illegal, as an elderly lady discovered. She succeeded in frightening off a gang of thugs by firing a blank from a toy gun, only to be arrested for the crime of putting someone in fear with an imitation firearm” (p. 184).

Not even if one’s life is in danger can one legally use a weapon. In another case, two men assaulted Eric Butler in a subway, smashing his head and choking him. “In desperation he unsheathed a sword blade in his walking stick and slashed at one of them. . . . The assailants were charged with unlawful wounding but Butler was also tried, and convicted of carrying an offensive weapon” (p. 185).

You can imagine the legal position if someone goes so far as to use a real gun to defend himself. As British law now stands, you cannot even use a gun in your own home to defend yourself against burglars. In a 1999 incident, Tony Martin surprised a professional burglar and his accomplice while they robbed his home. He fired, killing one of them.

Did the government commend Martin for his bravery in confronting the burglars? Quite the contrary, they tried and convicted him for murder. “Thus an English farmer, living alone, has been sentenced to life in prison for killing one professional burglar and ten years for wounding another when the two broke into his home at night” (p. 216). Fortunately, our story has a “happy” ending: the court of appeals reduced his sentence to five years, on grounds of “diminished capacity.”

Gun control advocates, faced with these facts, will at once begin to yammer uncontrollably, “a correlation is not a cause.” Indeed it is not; but in this instance, a strong correlation holds in two ways: when guns increase in number, violent crimes decrease, and when guns decrease, violent crimes increase. Further, a plausible causal story explains the correlation: the prospect of armed resistance deters criminals. This is about as good as an inductive argument gets. But I do not anticipate that those who wish to take away the right to self-defense will alter their position. They aim to make everyone totally dependent on the all-powerful state….