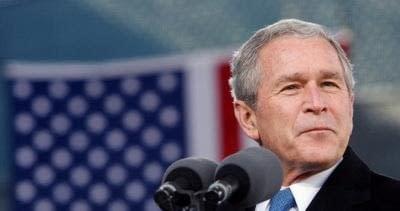 Libertarian Republican reports on the recent poll that shows Bush hold sway over veterans of the Iraq and Afghan wars. Duh.

It’s not even close. Bush destroys Obama by 33 points.

Just 32 percent of military veterans who served in Iraq or Afghanistan approve of the job Barack Obama is doing as president, according to a new poll from the Washington Post and the Kaiser Family Foundation.

In a related question, only 42 percent of those surveyed said they believe Obama is a “good commander-in-chief of the military.” Forty eight percent said he is not.

Veterans were asked a similar question about former President George W. Bush. Sixty-five percent said they felt he was a good commander-in-chief, while 28 percent responded he was not.

Editor’s comment – Can anyone picture Obama visiting with military troops after he leaves office? Participating in bike marathons with Iraq or Afghanistan war veterans? Visiting military hospitals? Not a chance. He’ll be just as bad of an ex-president, as he is as current occupant of the White House.