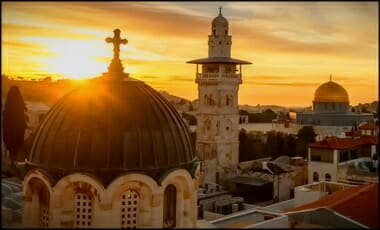 The following in from Ryan Bellerose (who is in the above video, and on TWITTER) and expands on his idea of what makes a people connected [indigenous] to a land ~ via TABLET MAGAZINE:

…An anthropologist named José Martínez Cobo, who served as the UN’s special rapporteur on discrimination against indigenous populations, developed a simple checklist in order to make indigenous status easier to understand. Even though that checklist has since been adjusted—I would argue, to fit the UN’s anti-Israel agenda—it remains the standard for most anthropologists in the field today:

Indigenous communities, peoples and nations are those which, having a historical continuity with pre-invasion and pre-colonial societies that developed on their territories, consider themselves distinct from other sectors of the societies now prevailing on those territories, or parts of them. They form at present nondominant sectors of society and are determined to preserve, develop and transmit to future generations their ancestral territories, and their ethnic identity, as the basis of their continued existence as peoples, in accordance with their own cultural patterns, social institutions and legal system.

This historical continuity may consist of the continuation, for an extended period reaching into the present of one or more of the following factors:

a) Occupation of ancestral lands, or at least of part of them;

b) Common ancestry with the original occupants of these lands;

c) Culture in general, or in specific manifestations (such as religion, living under a tribal system, membership of an indigenous community, dress, means of livelihood, lifestyle, etc.);

d) Language (whether used as the only language, as mother-tongue, as the habitual means of communication at home or in the family, or as the main, preferred, habitual, general or normal language);

e) Residence on certain parts of the country, or in certain regions of the world;

Archaeology, genealogy, and history all support the Jewish claim to indigeneity. A debate on this issue only even exists because we’ve been fed a false narrative that Palestinian Arabs also hold a claim to the land of Israel. Not to say that two peoples can’t be indigenous to one land. The Palestinians do indeed have the legitimate “rights of longstanding presence” in Israel, but this does not trump the indigenous status of Jewish people, 90 percent of whom can directly trace their genetics to the Levant. The cultural genesis, spirituality, language, and ancestral ties of Palestinian Arabs, however, trace back to the Hejaz (a region in present-day Saudi Arabia). In the Quran, the Hejaz is where Muhammad was born and where he established a community of followers.

To say that Palestinian Arabs were the first inhabitants of the land of Israel is problematic for actual indigenous people like the Jewish people, the Amazigh, the Copts, the Assyrians, the Samaritans, and others who were forcefully conquered, subsumed, and converted. It would literally be akin to white Europeans in North America making that same claim. Conquering peoples can still become indigenous through cultural genesis and coalescence. They cannot, however, become indigenous simply through conquering indigenous people.

It appears that once Palestinian Arabs realized their claim to being descendants of the Philistines was false—as the Philistines, derived from the Hebrew word peleshet, have no connection ethnically, linguistically, or historically to the people of Arabia—they decided that they were descended from Canaanites instead.

In a 2012 speech, a spokesperson for Mahmoud Abbas said, “The nation of Palestine upon the land of Canaan had a 7,000-year history B.C.E. This is the truth, which must be understood, and we have to note it, in order to say: ‘Netanyahu, you are incidental in history. We are the people of history. We are the owners of history.’ ”

This comment from the Abbas camp is complete rubbish, just one on a laundry list of Palestinian misnomers. First, the Canaanites have been extinct for 3,000 years and little is known today about their direct descendants. Second, pre-Islamic Arabs—of whom Palestinians are direct descendants—first appeared only in the 9th century BCE, not in 7000 BCE. Third, in 1946, before the establishment of Modern Israel, Palestinian-Arab leaders themselves only claimed a connection to the land of Israel dating back no further than seventh century CE—when Muhammad’s followers conquered North Africa and the surrounding region. You may also want to ask: What spiritual, cultural, or traditional constructs of the Canaanite people have Palestinian Arabs maintained? The answer is none.

But this should not be surprising. Even the most novice researcher looking into falsehoods perpetrated by Palestinian leaders would quickly find other blatant lies aimed at delegitimizing the history of the Jewish people, like the time Yasser Arafat told Bill Clinton there was never a Jewish temple in Jerusalem, or the time Ekrima Sabri, former Jerusalem mufti and chairman of the Supreme Islamic Council in Jerusalem, said, “After 25 years of digging, archaeologists are unanimous that not a single stone has been found related to Jerusalem’s alleged Jewish history.”

These are the proponents of the false narrative attempting to rebuke the indigenous status of the Jewish people in the land of Israel.

I got involved in this struggle because I was seeing nonindigenous people make arguments that are detrimental to actual indigenous people, arguments that attempt to rewrite our history. The idea that “Palestinian Arab” conquerors could become indigenous through conquering the Jewish people, even though the term “Palestinian” was only used in reference to Jews before 1948, is anathema. While Arabs claim to be related to the descendants of Israel through blood, it’s just another way to say that they acted like all conquerors, raping and pillaging and then settling and subsuming the locals. Native North Americans especially understand that simply conquering indigenous people does not grant one indigenous status…..