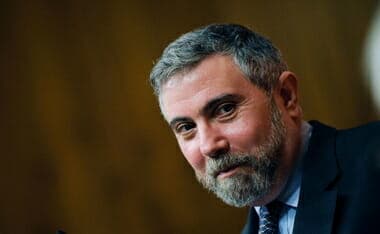 (Originally posted in July of 2012, re-posted as a response to Dennis Prager asking if Paul Krugman has ever debated anyone. RARELY, but here is one of the few examples)

Just so many know, Krugman never debates, and this is one of the only times I am aware of he has. From Video Description:

Tyler Durden submitted this much longer presentation (which I shortened) over at Zero Hedge, and points out the emotional clash between the two economists that is sure to be watched by the many free-marketers out there. Tyler entitled this posting, “The Ultimate Krugman Take-Down,” …he continues:

Forget Ali – Frazier; ignore Santelli – Liesman; dismiss Yankees – Red Sox; never mind Silva – Sonnen; the new undisputed standard by which all showdowns will be judged happened in Spain over the weekend. During a debate on Europe’s crisis, Pedro Schwartz (a mild-mannered Spanish ‘Austrian’ economics professor) took on the heavyweight Paul ‘I coulda been a Fed Chair contender’ Krugman, and – in our humble opinion – wiped the floor with his Keynesian philosophy. From the medicinal use of more debt to fix too much debt, to the Japanization of world economies and the demand-side bias of every- and any-thing – interested only in the short-term economic growth; the gentlemanly Spaniard notes, with regard to the European crisis, the fact that “Keynesians got us into this mess and now we have to sacrifice our principals so that they can get us out of this mess”. Humble and generous in his praise – though definitively serious with his criticism – Schwartz opines: “Often Nobel prize winners are tempted to pontificate on matters that are outside the specialty in which they have excelled,” noting “the mantle of authority whereby what ever they say – whether sensible or not – is accepted with resignation from some and enthusiasm by others.” Krugman’s red-faced anger is evident at the conclusion as he even refused to shake Schwartz’s hand after the debate.