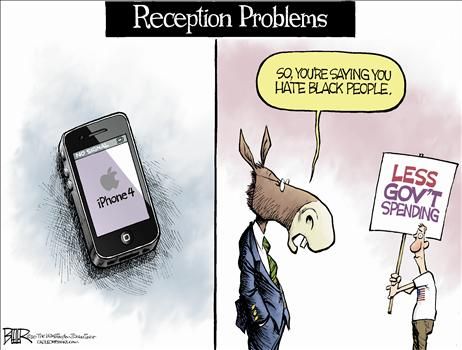 Missourins’ say NO to Obama… our fist is now Consti-tutionally held high!

“The citizens of the Show-Me State don’t want Washington involved in their health care decisions,” said Sen. Jane Cunningham, R-Chesterfield, one of the sponsors of the legislation that put Proposition C on the August ballot. She credited a grass-roots campaign involving Tea Party and patriot groups with building support for the anti-Washington proposition.

With most of the vote counted, Proposition C was winning by a ratio of nearly 3 to 1. The measure, which seeks to exempt Missouri from the insurance mandate in the new health care law, includes a provision that would change how insurance companies that go out of business in Missouri liquidate their assets.

“I’ve never seen anything like it,” Cunningham said at a campaign gathering at a private home in Town and Country. “Citizens wanted their voices to be heard.”

…About 71 percent of Missouri voters backed a ballot measure, Proposition C, that would prohibit the government from requiring people to have health insurance or from penalizing them for not having it.

The Missouri law conflicts with a federal requirement that most people have health insurance or face penalties starting in 2014.

Tuesday’s vote was seen as largely symbolic because federal law generally trumps state law. But it was also seen as a sign of growing voter disillusionment with federal policies and a show of strength by conservatives and the tea party movement.

“To us, it symbolized everything,” said Annette Read, a tea party participant from suburban St. Louis who quit her online retail job to lead a yearlong campaign for the Missouri ballot measure. “The entire frustration in the country … how our government has misspent, how they haven’t listened to the people, this measure in general encompassed all of that.”

Missouri’s ballot also featured primaries for U.S. Senate, Congress and numerous state legislative seats. But at many polling places, voters said they were most passionate about the health insurance referendum.

“I believe that the general public has been duped about the benefits of the health care proposal,” said Mike Sampson of Jefferson City, an independent emergency management contractor, who voted for the proposition. “My guess is federal law will in fact supersede state law, but we need to send a message to the folks in Washington, D.C., that people in the hinterlands are not happy.”…