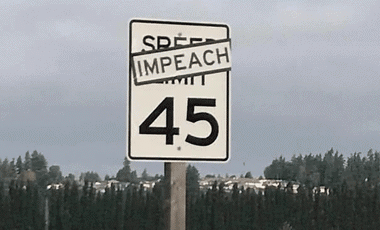 THE BLAZE catalogs the debate between Dershowitz and Laurence Tribe via NEWSMAX. The best book written on the subject is the one pictured here… it delves into the debates over this PROCESS well. 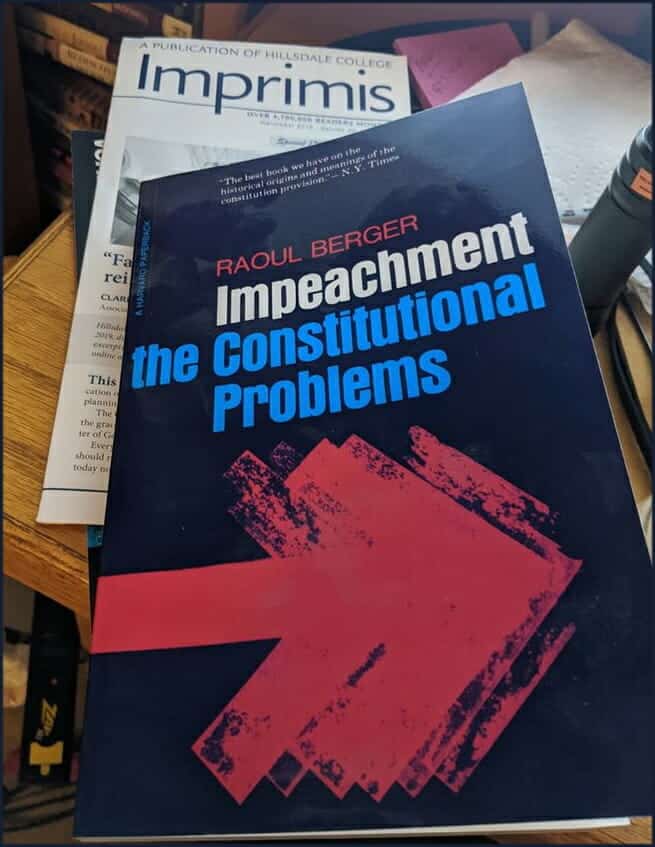 I here reproduce the arguments I think the Founders clearly noted in their deliberations about the impeachment clause:

“It is difficult to imagine anything more unconstitutional, more violative of the intention of the Framers, more of a denial of basic due process and civil liberties, more unfair to the president and more likely to increase the current divisiveness among the American people. Put bluntly, it is hard to imagine a worse idea put forward by good people,” he added.

“President Trump would stand accused of two articles of impeachment without having an opportunity to be acquitted by the institution selected by the Framers to try all cases of impeachment,” Dershowitz said. “It would be as if a prosecutor deliberately decided to indict a criminal defendant but not to put him on trial.”

Dershowitz concluded that to deny Trump the “fundamental right” of a speedy trial “might serve the temporary interests of the Democratic Party, and academics who support it, but would do violence to the rule of constitutional law that is supposed to serve all Americans, regardless of party or ideology.”

This echoes leftist Harvard Law Professor Noah Feldman, who testified on behalf of Democrats in front of the House Judiciary Committee earlier this month, essentially saying President Trump isn’t actually impeached until the Pelosi sends the articles to the other side of Capitol Hill. Feldman argues this point in a new piece for Bloomberg titled, “Trump Isn’t Impeached Until the House Tells the Senate.” 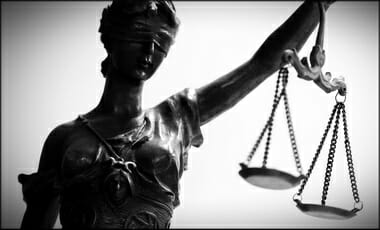 MOST IMPORTANT to keep in mind as the viewer is immersed in this implosion of Democratic narratives:

…The far-left Washington Post hid a bombshell under the anodyne headline “Americans are split on impeachment, just like they were before the public hearings”–  except, yeah, in the only states that matter, they are actually not split…

Buried under six paragraphs, we learn that, in almost all of the 2020 swing states, a majority oppose this hoax impeachment by a clear margin of 51 to 44 percent: [emphasis added throughout]

And this is not the first poll that shows impeachment backfiring in the only places that will matter next year.

The depressed support for impeachment in key states was first signaled by a series of New York Times-Siena College polls conducted in mid-October, which found between 51 and 53 percent opposing impeachment in Arizona, Florida, Michigan, North Carolina, Pennsylvania and Wisconsin.

Let’s not forget that Wisconsin poll that shows 53 percent oppose impeachment, while only 40 percent disagree.

First up to bat here… Doug Collins’ opening Statement (his closing statement is good as well):

Matt Gaetz, whom PJ-MEDIA says “brought a blow torch to the impeachment hearings and set a glorious bonfire“:

WEASEL ZIPPERS notes the “objectivity” (videos) — and PJ-MEDIA laid down the law with this chicks Congressional statements:

…She even peddled the nonsense in a published law review article. Karlan falsely wrote, “For five of the eight years of the Bush Administration, [they] brought no Voting Rights Act cases of its own except for one case protecting white voters.”

Karlan’s sleight of hand might be interesting… if it were true. Sadly, for her credibility, it is demonstrably false, and she has never once corrected her false scholarship. Her fellow travelers never mention her falsehood and instead praise and elevate her, still.

This is demonstrably false; any visit to the DOJ website demonstrates this. Karlan says the Voting Section brought no cases to protect minorities under the Voting Rights Act in five of eight years — let’s look at the record:

Even if Karlan were to claim she meant only “vote dilution cases” (commonly thought of as “redistricting” cases), she is still lying. Dilution cases were brought in four of the eight years, not three of the eight, as she falsely claims. In any event, it’s impossible to claim she only meant dilution cases: she made the bold, broad statement that the Bush DOJ “brought no Voting Rights Act cases of its own” in five of eight years. Taken literally, Karlan’s claim is especially false, as cases under Section 2 of the Voting Rights Act were brought — as we see above — in every year except 2004.

Wow… she is a nutter and wrong on facts. Damn — good job Dems. But the other people the Democrats chose are not as bad… right? Wrong. GATEWAY PUNDIT notes the RADICAL nature of Noah Feldman:

…Noah Feldman, the first impeachment ‘witness’ the Dems rolled out on Wednesday not only called for Trump’s impeachment shortly after Trump was sworn in, he actually argued in a NY Times op-ed titled, “Why Shariah?” that Islamic Sharia law is more humane than US law.

Noah Feldman, a Harvard Law professor, bashed legal systems created by Western countries including the United States and argued Sharia law is more ‘just’ and ‘fair’ than the US Supreme Court.

Mr. Feldman actually believes that a medieval system of laws that chops off the hands of thieves, stones ‘adulterous women,’ blames the woman when she is raped by a man, publicly hangs and tosses homosexuals off of buildings, is more “progressive” and “humane” than Western laws.

“In fact, for most of its history, Islamic law offered the most liberal and humane legal principles available anywhere in the world. Today, when we invoke the harsh punishments prescribed by Shariah for a handful of offenses, we rarely acknowledge the high standards of proof necessary for their implementation,” Feldman argued.

Feldman also claimed that the West “needs Shariah and Islam.”…

JIHAD WATCH has some older article on this cat, here, and here for example. Another noteworthy questioning was by Ratliff:

Here is the FULL Republican counsel’s questioning of Turley: