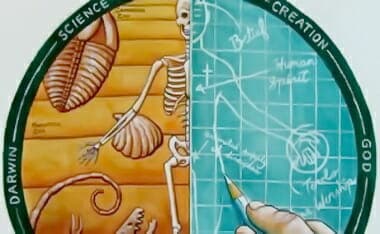 As the UK’s leading theistic evolutionist, Dr John Polkinghorne started the debate with his claim that the universe had evolved over the past 14 billion years. Mackay quickly produced a copy of a 1990 lecture by Polkinghorne, where he had stated the universe had evolved over 15 billion years. It was fun to watch the audience react to Mackay’s claim that evolution must be so wonderful it has enabled John Polkinghorne to become 15 years older while the universe became one billion years younger, and then use it to emphasis the point that these vast billions of years are not facts that disprove a literal reading of the scriptures, but men’s feeble theories, which are constantly evolving while the scriptures in Genesis remain firm.

THE UK CHURCHMAN NEWSPAPER reporting the Liverpool Debate stated: “The controversial issue of origins was given a theological airing in the cloistered confines of Liverpool’s Anglican Cathedral, on March 8th 2005. The distinguished Australian Creation Scientist John Mackay was, in my humble opinion, far away ahead in his creation views against the resident Anglican theologian, Canon John Polkinghorne, KBE. It was a great educational debate but in my view Mackay’s Biblical answers left the canon (and he reminded me very much of Captain Mainwaring of Dad’s Army) spluttering in his hastily assembled answers. (from Liverpool Canon Debates Creation Scientist in Cathedral by G. Patrick Battell Paper No 7568, 18 March 05) Hosted by popular BBC Commentator Roger Phillips, this exciting debate was filmed professionally.

This is one DVD you don’t want to miss. Since faith in Theistic Evolution over billions of years is one of the biggest problems in evangelical churches throughout the world, your church needs to see it as well!

To purchase this DVD go to http://www.creationresearch.net/secure/store/home.php?shopkey=3399 click on GREAT DVDS and scroll down titles: