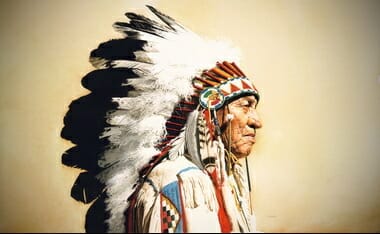 American Indians are the poorest of all of America’s ethnic groups. Why? After all, the government has granted them massive reservations and created entire agencies to look after them. Well, maybe that’s why. Naomi Schaefer Riley, author of “THE NEW TRAIL OF TEARS,” explains.

John Stossel interviews some American and Canadian Indians regarding how the Federal Government hampers the entrepreneurial spirit in the Native populations and how capitalism [free-markets] — and NOT social programs and handouts — make Indians rich and self-sufficient.

(Above video description) Imagine if the government were responsible for looking after your best interests. All of your assets must be managed by bureaucrats on your behalf. A special bureau is even set up to oversee your affairs. Every important decision you make requires approval, and every approval comes with a mountain of regulations.

How well would this work? Just ask Native Americans.

Indian lands are owned and managed by the federal government.

Chief Justice John Marshall set Native Americans on the path to poverty in 1831 when he characterized the relationship between Indians and the government as “resembling that of a ward to his guardian.” With these words, Marshall established the federal trust doctrine, which assigns the government as the trustee of Indian affairs. That trusteeship continues today, but it has not served Indians well.

Underlying this doctrine is the notion that tribes are not capable of owning or managing their lands. The government is the legal owner of all land and assets in Indian Country and is required to manage them for the benefit of Indians.

But because Indians do not generally own their land or homes on reservations, they cannot mortgage their assets for loans like other Americans. This makes it incredibly difficult to start a business in Indian Country. Even tribes with valuable natural resources remain locked in poverty. Their resources amount to “dead capital”—unable to generate growth for tribal communities.