All these photos come from Tom Gross’s Mideast Dispatch Archive, and the article portion is from Arutz Sheva:

…While Hamas continues to complain that Gaza lacks building materials, a luxury mall in Gaza City held its grand opening over the weekend. Among the goods on sale are Israeli men’s clothing, and items from Turkey, France, and the United States.

Photojournalist Tom Gross, who publicized photos from Saturday’s event on his website, noted that the opening coincided with a visit to Gaza from European Union foreign policy director Catherine Ashton. “The BBC and other media have featured extensive reports all day long on what they term the dire economic situation in Gaza; why are they not mentioning the new shopping mall that opened there yesterday?” Gross asked.

Pictures of the new mall were featured on the Palestinian Authority Safa website and by the Associated Press.

Hamas has often accused Israel of creating a “siege” by keeping its border crossings to Gaza closed. According to Hamas, Gaza lacks electricity and building supplies…

Here are the photos: 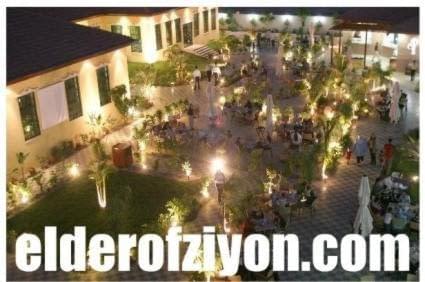 The below is about the above video, take note that the following is from Big Peace:

Here’s an update on Youtube’s removal of Latma-TV’s English-subtitled “We Con The World” video – the parody of the politically correct posturing in the original “We Are The World” song. The Latma video parodied the singers as  “Flotilla terrorists” singing about their propaganda tactics. The original English-subtitled video had over 3 million hits, before Youtube removed it due to a complaint of copyright violation on behalf of Warner/Chappell Music Inc. Versions with Hebrew subtitles can still be seen at Latma-TV channel here and within the Latma-TV weekly newscast.

The URLs of the removed videos were:

When Youtube removed the links to the English-subtitled video, they effectively stopped the then 3-million plus viral distribution just as it was  expanding, eliminating potentially millions of other views (see the classic analysis on viral marketing projections by Alan L. Montgomery of Carnegie Mellon University).

Latma-TV  sent a formal request to Youtube to put the parody video “We Con the World” back up. The producers received an email back on June 18, stating the video would be back up in 10-14 business days. July 9 will be “day 14,” so the deadline is near for Youtube’s staff to make the judgment that the English-subtitled video was a legitimate parody – and therefore protected under the “Fair Use” provision in the US copyright law.

Watch this space for updates as we count down to July 9.

Meanwhile – as a comparison – you can view two satirical parodies, both from the Left’s perspective, of the “We Are The World” song that were NOT  removed from Youtube.

This is a definition of sorts of the Harry S. Truman Battle Group:

I believe these are part of the Battle Group that may have crossed? “… anytime, anyplace.”  I love that. Here are some of the ships affiliated with this strike group:

This is in connection with an earlier story I posted — apparently. I hope America will continue its support of Israel in this way. Pray that our Pres see’s the benefit in this support.

US, Israel Warships in Suez May Be Prelude to Faceoff with Iran

Egypt allowed at least one Israeli and 11 American warships to pass through the Suez Canal as an Iranian flotilla approaches Gaza. Egypt closed the canal to protect the ships with thousands of soldiers, according to the British-based Arabic language newspaper Al Quds al-Arabi.

One day prior to the report on Saturday, Voice of Israel government radio reported that the Egyptian government denied an Israeli request not to allow the Iranian flotilla to use the Suez Canal to reach Gaza, in violation of the Israeli sea embargo on the Hamas-controlled area.

International agreements require Egypt to keep the Suez open even for warships, but the armada, led by the USS Truman with 5,000 sailors and marines, was the largest in years. Egypt closed the canal to fishing and other boats as the armada moved through the strategic passageway that connects the Red and Mediterranean Seas.

Despite Egypt’s reported refusal to block the canal to Iranian boats, the clearance for the American-Israeli fleet may be a warning to Iran it may face military opposition if the Iranian Red Crescent ship continues on course to Gaza.

The warships may exercise the right to inspect the Iranian boat for the illegal transport or weapons. Newsweek reported that Egyptian authorities could stop the ship for weeks, using technicalities such as requiring that any official documents be translated from Farsi into Arabic….

An armada of 11 US warships and one Israeli vessel passed through the Suez Canal Friday June 18 on their o the Red Sea and Persian Gulf, debkafile reports exclusively from its military sources. The fleet, the first of this composition to navigate the Suez Canal, is led by the USS Harry Truman carrier and its Strike Group of 60 fighter-bombers and 6,000 seamen and marines.

Egyptian port authorities imposed exceptional security measures for the ships’ passage. All commercial and civilian traffic through the Suez Canal was halted and beefed-up security forces posted along both its shores. Egyptian fishermen were recalled to port from their grounds in the Bitter Lake.
The massive movement of this large US naval-air force plus an Israeli contingent is a strong new factor in the continually rising Middle East tensions of the last two weeks, to which Iran has not so far responded.

Debka has an interesting news story that concerns our military men and women:

The USS Harry S. Truman carrier, complete with its strike group of 60 warplanes and 6,000 seamen, has been ordered to turn course from the Persian Gulf and deploy with the US Sixth Fleet in the Mediterranean for the time being, debkafile’s military and Washington sources report. The administration’s decision was prompted by incoming intelligence attesting to heightened marine and military tensions between Israel, Turkey and Iran, in the wake of the Turkish premier Recep Erdogan’s determination to give his screws on Israel another turn – or two.

He was solidly backed up from Tehran Wednesday, June 16, by parliamentary speaker Ali Larijani, who threatened military retaliation against Persian Gulf and Mediterranean shipping for any interference with the vessels Iran was sending to the Gaza Strip. He did not specify what kind they were.

In Jerusalem, Foreign Minister Avigdor Lieberman asserted that Israel would no longer respect these vessels as promoted by aid agencies because they were obviously dispatched by outright enemies with hostile intent thinly disguised as humanitarian efforts.

Erdogan is planning more provocative sea convoys for Gaza and the severance of diplomatic relations….

The Fauxtography involved in past Islamic ruminations and perpetrated or continued by AP and Reuters and other main new and media organizations is almost legion. But here we are again with another example of it with the Turkish flotilla of “peace” that again makes my head wag. This is with thanks to HotAir and The Lid. At the Lid you will find some history to this aspect neatly in one post. My “legion” example are a few posts on the subject at my old blog. Here are simple the photos with the cropped photo afterward: 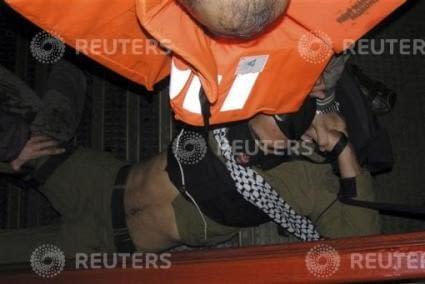