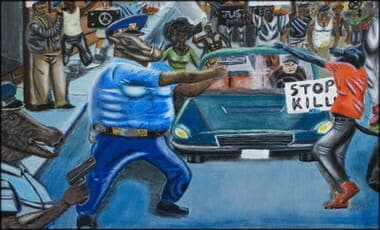 …The painting, “Untitled #1,” has drawn criticism from police groups, who said it depicts police as pigs; one officer appears prominently with what looks like the head of a hog or boar.

Steven Engelhardt said Clay would not be available for comment Friday, and Clay was not in his office, a receptionist said.

“It was an impulsive thing when I walked by,” Hunter said of his decision to remove the painting Friday morning.

“It strikes a nerve. I’m not a cop, but I was in the Marine Corps,” he said, in a 10-minute interview in his office. “It kind of strikes the same nerve as when the guys came home from Vietnam, and they called them baby killers.”….

Congressman Duncan Hunter, Republican from California took down a controversial painting from the wall of a Capitol complex hallway Friday morning.

The painting by St. Louis student David Pulphus which was selected as a winner of a Congressional art contest in 2016 is about the Ferguson, Missouri anti-police riots and depicted police officers as pigs. The painting was selected to hang in the Capitol by the office of Congressman William Lacy Clay, Democrat from Missouri. It has hung at the Capitol in a tunnel that connects lawmakers’ offices at the Longworth Building with the Capitol since a June ceremony for winners of the contest.