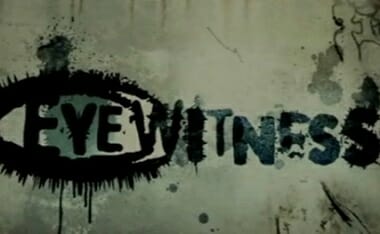 These updates are posted because we were told this was a “good” kid who was days away from going to college. Speaking from experience, if I were killed during my youth it would be based on MY choices and behavior. God saw fit to keep me in His material creation… reaching down into a place you would think God couldn’t — super-max. God is good AND God is sovereign.

ANOTHER Update… thanks Gateway!

The convenience store video reveals Michael Brown entering the store followed by Johnson. Brown hands a box of Swisher Sweets to Johnson. Brown took several boxes of cigars and turned to leave the store. “Brown grabbed the clerk and “forcefully pushed him back into a display rack.”

See the police report that details more at Gateway.

Here is the UPDATE, via Gateway Pundit

The two pictures on the left [below] appear to depict two different hand signs that show allegiance to a “Bloods” street gang. Take note of the red as well. 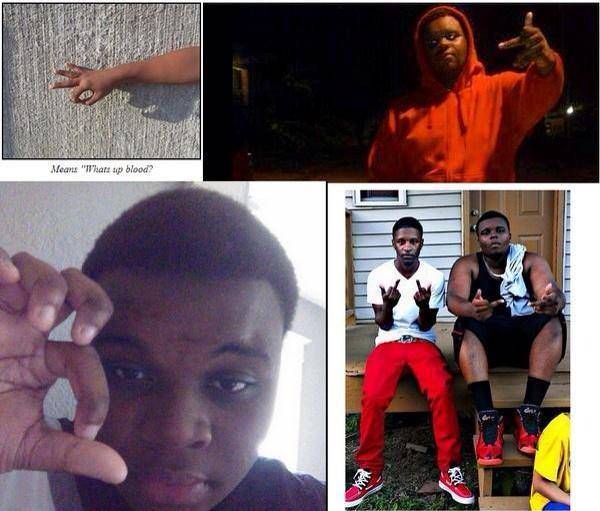 There are two versions of what went down in the Ferguson shooting. I am leaning towards the officers version… but I agree with Rational Beacon’s main point to finish out his post, which is: “…police should video record everything they do. If we had a clear video of what happened, we’d almost certainly be able to firmly nail down the relevant facts.”

I hope there is video (or at least audio from the forward facing video?).

Legal Insurrection, however, has this head turner that the eyewitness has not been interviewed by the police:

…There appear to be conflicting reports from law enforcement and supposed eye witnesses regarding what actually happened. Law enforcement claim Brown assaulted the cop that took his life. Dorin Johnson who claims he was with Brown at the time he was shot has a very different story. Johnson says he and Brown were minding their own business when a cop rolled up, told them to get on the sidewalk, then proceeded to assault Brown and eventually kill him.

Even more curious is that Johnson claims he, by way of his attorney, has reached out to local law enforcement to provide his account of the story, and Ferguson police are refusing to interview him….

Here is the first version of the haps:

Here is what happened, according to police, as reported by the Wall Street Journal:

Authorities said the shooting occurred around noon Saturday, when a Ferguson police officer encountered two men in the street. When the officer tried to exit his vehicle, Chief Belmar said one of the two pushed the officer back into the cruiser. The suspect allegedly assaulted the officer in the car and the two struggled over his gun. At least one shot was fired inside the vehicle. A few moments later, Chief Belmar said, the officer allegedly fired multiple shots outside the vehicle that killed the suspect, about 35 feet from the cruiser.

If that account is accurate, and if Brown is the “suspect” in question, then arguably Brown attempted to murder a police officer.

…now consider the accounts of Brown’s associate and another witness, as reported by the Los Angeles Times:

Dorin Johnson, a friend of Brown’s, told Fox 2 that he and Brown were walking in the street when the police car pulled up. The officer said to “get the eff onto the sidewalk,” he recounted. Johnson said the officer reached out of the car window and grabbed Brown around the neck.

Another witness, Piaget Crenshaw, said she saw police chase Brown. “He ran for his life,” she said. “They shot him and he fell. He put his arms up to let them know that he was compliant and he was unarmed, and they shot him twice more and he fell to the ground and died.”