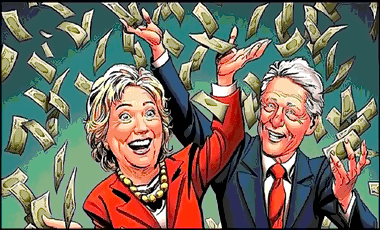 This is a must watch two videos and article mentioned herein by HOTAIR:

When MSNBC (even the painful-to-watch Morning Joe) takes a full seventeen minutes to discuss the “sleazy” connections between Bill Clinton and his cronies and their “get rich quick from other people’s money” schemes, it’s worth taking notice.

The memo, made public Wednesday by the anti-secrecy group WikiLeaks, lays out the aggressive strategy behind lining up the consulting contracts and paid speaking engagements for Bill Clinton that added tens of millions of dollars to the family’s fortune, including during the years that Hillary Clinton led the State Department. It describes how Band helped run what he called “Bill Clinton Inc.,” obtaining “in-kind services for the President and his family — for personal travel, hospitality, vacation and the like.”

Band and his Teneo co-founder, former Hillary Clinton fundraiser Declan Kelly, declined to comment. But Teneo issued a statement saying that “as the memo demonstrates, Teneo worked to encourage clients, where appropriate, to support the Clinton Foundation because of the good work that it does around the world. It also clearly shows that Teneo never received any financial benefit or benefit of any kind from doing so.”

There’s more to it and you really should read the whole thing….