This is important and is a h/t to Marooned In Marin. Important because we hear all the time that this Imam eulagized Danial Pearl. Well, that fact has nothing to do with this debate, as Daniel’s father points out: 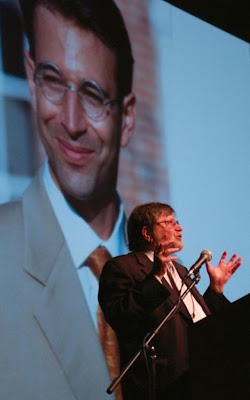 Judea Pearl, father of Daniel Pearl, the Wall Street Journal reporter who was kidnapped and beheaded (on video) by Khalid Shiekh Mohammed in 2002, has penned a piece against the Ground Zero Victory Mosque in the Jerusalem Post.

I have been trying hard to find an explanation for the intense controversy surrounding the Cordoba Initiative, whereby 71 percent of Americans object to the proposed project of building a mosque next to Ground Zero.

I cannot agree with the theory that such broad resistance represents Islamophobic sentiments, nor that it is a product of a “rightwing” smear campaign against one imam or another.

Americans are neither bigots nor gullible.

…A more realistic explanation is that most Americans do not buy the 19 fanatics story, but view the the 9/11 assault as a product of an anti- American ideology that, for good and bad reasons, has found a fertile breeding ground in the hearts and minds of many Muslim youngsters who see their Muslim identity inextricably tied with this anti-American ideology.

THE GROUND Zero mosque is being equated with that ideology. Public objection to the mosque thus represents a vote of no confidence in mainstream American Muslim leadership which, on the one hand, refuses to acknowledge the alarming dimension that anti-Americanism has taken in their community and, paradoxically, blames America for its creation.

The American Muslim leadership has had nine years to build up trust by taking proactive steps against the spread of anti-American terror-breeding ideologies, here and abroad….