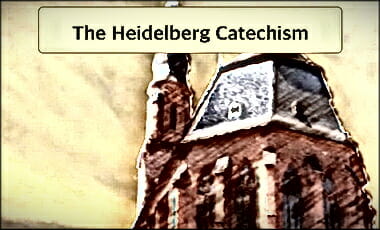 Zacharias Ursinus (1534-1583), a sixteenth century German theologian, born Zacharias Baer in Breslau (now Wroc?aw, Poland). Like all young scholars of that era he gave himself a Latin name from ursus, meaning bear. He is best known as a professor of theology at the University of Heidelberg and co-author with Caspar Olevianus (1536-1587) of the Heidelberg Catechism…. (THEOPEDIA)

The Heidelberg Catechism is a document used in Reformed churches to help teach church doctrine. It takes the form of a series of questions and answers to help the reader better understand the material. It has been translated into many languages and is regarded as the most influential Reformed catechism.

Elector Frederick III, sovereign of the Palatinate from 1559 to 1576, appointed Zacharias Ursinus and Caspar Olevianus, to write a Reformed catechism based on input from the leading Reformed scholars of the time. One of its aims was to counteract the teachings of the Roman Catholic Church regarding theology, basing each statement on the text of the Bible…… (THEOPEDIA)