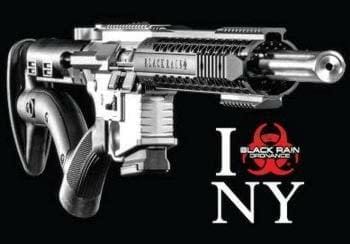 A thumb in the eye to leftists:

(The Blaze) A Missouri-based gun manufacturer announced this week that it will release a line of “New York Compliant” rifles, a market-based response to the Empire State’s strict new gun laws.

“With the continual trampling of the 2nd Amendment in New York, Black Rain Ordnance is proud to announce their ‘New York Compliant’ rifles,” the group said in a statement on its website. “These rifles feature all of the quality and craftsmanship of the standard BRO-lines, but with the added features that allow for legal possession.”

And the Free Patriot mentions the thumb-in-the-eye:

A little more than a year ago, the state of New York passed the Safe Act, making them the harshest state in the union when it comes to gun control. Authorities in the state were still patting each other on the back for such stringent new laws such as requiring magazines possess no more than seven rounds, and no more pistol grips or adjustable stocks on rifles. Pistol grips and adjustable stocks make guns look too mean.

Well, they’ve stopped patting themselves on the back and are livid now that a new AR 15 model has been designed which falls into regulation with the Safe Act laws….

Although the gun may look a little different, it shoots the same .223 rounds and still retains semi-automatic capabilities.  A few state troopers have already shown interest in buying some of the prototypes.

New York gun shops are simply trying to fill a void in the market that the new unconstitutional Safe Act left behind.  And although gun owners will still be restricted to the 7 round limit in their magazines, there is hope that this will be overturned as more realize how ridiculous this restriction is.  After all, 12-16 round magazines in handguns are the norm across the US.