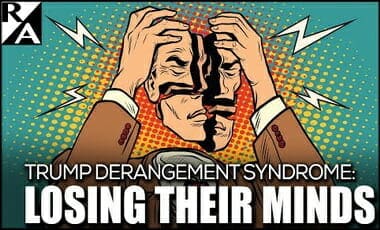 I am merely going to post the conversation I am having (and may add to) on Facebook — and how TDS (Trump Derangement Syndrome) is creating “identity Faith” much like we understand “identity politics.” Before reading this back-n-forth, one should read this article about a skeptical Democrat that went to Trump Rally

…Now, Trump is always going to present the best case he can. And yes, he lies. This is provable. But the strength of this rally wasn’t about the facts and figures. It was a group of people who felt like they had someone in their corner, who would fight for them. Some people say, “Well, obviously they’re having a great time. They’re in a cult.” I don’t think that’s true. The reality is that many people I spoke to do disagree with Trump on things. They don’t always like his attitude. They wish he wouldn’t tweet so much. People who are in cults don’t question their leaders. The people I spoke with did, but the pros in their eyes far outweighed the cons. They don’t love him because they think he’s perfect. They love him despite his flaws, because they believe he has their back….

“Enjoy” (I censored names and profile pics for privacy):

My Response to some of the above:

(I respond to WILEY) The only solution is not to vote. Ever. Even Joy Behar – speaking of HER OWN candidates said:

And the media montage from MSM is all the same. When identity politics guides Christianity (by posting Washington Post stories about what it takes to be an authentic Evangelical/Christian… or WaPo speaking to what it takes to be an authentic black, like I am sure Charles Evers – brother of Medgar Evers – is being told as I type… and if Charles Evers claims to be a Christian… fo-get-a-bout-it [*New York Italian “twang”).

The media has painted every Republican as a racist since Goldwater. Saying Reagan get his precepts from Mein Kampf. Saying Bush the elder kills blacks with his rhetoric. Bush Jr. left black people to die on rooftops… Etc (SEE MY YOUTUBE UPLOAD).  “Trump,” as the media paints him is ?????? ???????.

And I don’t care about a politician saying he has the greatest crowd size. I do care when a person is called an anti-Semite when he is not. I do care when someone is called a racist and he is not. I do care when someone is said he mocked a handicap man’s disability when he didn’t. That he is an agent of Russia when he clearly is not. These are lies Christians should really care about. The rape of man’s character by people who are in the D.C. bubble (WaPo, NYT, CNN, NPR, etc ) — all guilty of the above. I see the fraudulent “lie count” for what it is… SMOKE AND MIRRORS – and I am ashamed to say, other believers in Christ do not. I have yet to find something done by the media’s “Trump” that would get a very conservative, very Evangelical voter like myself to have Christ stand next to me when I vote again for the REAL Trump.

And speaking to any non-Christian (Susan Bagwell) about the depravity of his worldview without Christ never begins or ends (or centers) with Trump and how I or he/she votes. I have had the pleasure to be the tool of the Holy Spirit speaking to a Satanist whom I led through the Sinner’s Prayer. A young kid sitting on a bunk in Wayside North who had booklets from a now defunct Christian Identity “church.” This kid was STEEPED in racist theology. You see, this was my last time in jail, serving 23-days for a decade old warrant (I am a three-time felon) [… the last time in jail for me before this 2004 pay-off of a 1994 warrant was 1991.] Because I studied (in-depth) 4-racist cults by this time, I* was able to steer this kid through enough Scripture and reason that he threw away his booklets. When I left that facility I handed him my Bible with a reading plan.

I have other stories as well. But not once did the Holy Spirit chasing down these souls — did voting patterns come up. Not once. The conviction by God of how much they are sinners and need salvation is a miracle – and for you to paint it as corrupted by Trump is deplorable ?

* While I was present at times when the Holy Spirit moved on a person, and I had the knowledge to speak to the worldview/beliefs the person expressed – my insatiable passion for Apologetics and knowledge of the occult and cults as well as the world religions is, I am convinced, God using my passion for His Will. (God can only use the knowledge or passion/experiences you have… testing them always: 1 Thessalonians 5:21; 1 John 4:1 – side note on this… this also speaks to worldviews and cultural milieu)

I was able to speak to a Satanist about a topic HE brought up (that Satanist often get painted as sacrificing animals when they believe that the “life is in the blood,” his own words). That led me to showing how Christ’s blood IS LIFE. Or the young racist kid in North. He spoke about the lost tribes of Israel, which led me to talk about the Hebrew word for Adam, Moses marriage, Paul’s tribal affiliation, Acts speaking of One Blood, etc. While I think at times how great I am… God will put on me a humbleness that He drove me to these things because He passionately was chasing after that single lamb down the cliff in the ravine. I wax long about God chasing me… but now realize He really wanted my wife and boys… I was merely USED by Him FOR HIS GLORY, not my own. And to put Trump in the middle of this exchange is something that only identity politics can drive. Not Christianity.