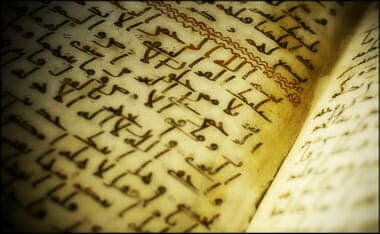 Among the major differences between Islam and Christianity is that of the character and nature of God as understood by the Bible and the Qur’an. For the Bible, Yahweh is a relational God, a God who appears to his people throughout the Old Testament, who took on flesh in the incarnation of Jesus Christ in the New Testament, and who will be present, the Bible claims, in heaven with us once again: “For now we see through a glass, darkly,” wrote the apostle Paul; “but then face to face.” [76] This is very different from Allah in the Qur’an, a God who is distant and remote, transcendent and lofty, who does not deign to step down into his creation, and is not present in Paradise. As Muslim theologian Isma’il al Faruqi writes:

Central, too, to the Christian understanding of God is that Yahweh is loving; indeed, the Bible goes as far as to boldly make the claim that God is love,[78] the one whose character and nature define what love actually is. You will commonly hear people opine that all religions teach that God is love, but this is simply not true – for instance, nowhere does the Qur’an claim that “Allah is love.”[79]

Finally, at the heart of Christianity stands the belief that, in Jesus, God has experienced suffering, paying the price of the cross in order to reconcile humanity to himself. Now atheists may choose to dismiss, laugh at, or even scoff at that claim, but it is a claim unique to Christianity.[80] It is certainly not an idea found in Islam, where the Qur’an goes as far as to deny that the historical event of Jesus’ crucifixion ever happened.

It has long fascinated me that when Christianity talks about the cross and the suffering of God, it is doing something quite startling, namely reversing the traffic pattern of every other religion, world view, and belief system. All other religions of which I am aware tend to work in one of three basic ways: they claim that if you know the right things, do the right things, or experience the right things, then you will achieve paradise, nirvana, wisdom, a higher state of consciousness, good teeth — whatever it is you are looking for. Islam adopts this model (“Keep the commandments”), as does, incidentally, the New Atheism, whose message is that if you think the right way — think good, secular, scientific thoughts — you’ll be one of the smart ones, one of the brights,[81] one of the elite, the elect.

[79]  And many Muslim theologians argue that Muslims should not use the word “love” when talking about Allah; see e.g. Murad Wilfried Hofmann, “Differences between the Muslim and the Christian Concept of Divine Love” in 14th General Conference of the Royal Aal al-Bayt Institute for Islamic Thought, Amman, Jordan, 2007. See also Gordon Nickel, “The Language of Love in Qur’an and Gospel” in Juan Pedro Monferrer-Sala and Angel Urban, (eds), Sacred Text: Explorations in Lexicography, Frankfurt: Peter Lang, 2009, pp. 223-248.

[80] If you wish to understand this idea (which, whatever you make of it, is the central claim at the heart of Christianity), a great place to start is John Stott, The Cross of Christ, Leicester: IVP, 2006.

[81] A nauseatingly self-congratulatory term coined by some of the New Atheists to mark themselves off from the rest of the world, whom they clearly perceive as dimwits. See Daniel Dennett, “The Bright Stuff“, The New York Times, 12 July 2003.