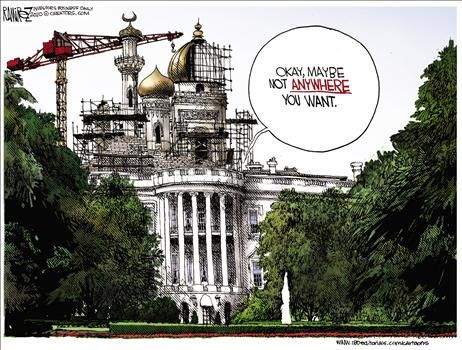 NewsBusters has a great post about percentages, and it shows that 67% of New Yorkers would prefer the Mega-Mosque (Ground Zero Mosque) built a bit further away. Maybe to a place where body parts and plane [art were not found on and in from the first plane hitting the first Tower? Just maybe? Noel Sheppard rightly pooints out this “subject” “object” distinction that New Yorkers and 72% of the nation can get, but the general media cannot: “Most people outside the liberal press are intelligent enough to understand that developers have the right to build this mosque if its zoning is approved. They just question the wisdom of doing so. If an overwhelming majority of New Yorkers can understand the difference between having the right to do something and whether or not it would be appropriate, why can’t media members?” Indeed, why can’t they. Maybe because a majority of them are very progressive in their views, no thanks to institutions like Columbia University. Here is the poll:

Over all, 50 percent of those surveyed oppose building the project two blocks north of the World Trade Center site, even though a majority believe that the developers have the right to do so. Thirty-five percent favor it.

The poll, however, reveals a more complicated portrait of the opposition in New York: 67 percent said that while Muslims had a right to construct the center near ground zero, they should find a different site.

Most strikingly, 38 percent of those who expressed support for the plan to build it in Lower Manhattan said later in a follow-up question that they would prefer it be moved farther away, suggesting that even those who defend the plan question the wisdom of the location.

I wonder if this poll would even be higher if some of the terror financing connections were more widely known and quotes by this “bridge building” Imam?