(Mention of possible religious motivation at the 2.00 minute mark in the TV report)

The very latest on the case of Yusuf Ibrahim, from New Jersey 101.5:

An Indiana man accused of fatally shooting two men in a parked car, cutting off their heads and hands and burying them in the woods in southern New Jersey has made his first court appearance in Jersey City.

The Jersey Journal reports that 28-year-old Yusuf Ibrahim, currently of Jersey City, didn’t speak Thursday during his hearing via video link from the Hudson County jail. He is facing two counts each of murder and desecration of human remains.

Bail was set at more than $3 million cash.

The two victims were Coptic Christian men. Interestingly, no motive for the brutal murders are being released by officials.

Editor’s comment – The political correctness quotient is almost comical: An “Indiana man,” instead of Muslim man? He probably lived a couple years in Indianapolis, fresh off the boat from Cairo, or Ankara, so the media grants him the moniker of “Indiana man.”

…The liberal media is being cautious not to identify the shootings as an act of terrorism. They are also avoiding any reporting of the man’s obvious ethnic origins, or immigration status.

This morning, chilling details about how he murdered his victims are beginning to come out.

Details are emerging about the killer. He is described as a loner, who lives with his parents. He was unemployed, and only attended a local community college part-time.

This morning’s killing spree by Ali Syed presents an opportunity to clear up some confusion. Is Syed a Muslim? His name would suggest a Muslim background, but for all we know at this point, he could (possibly) turn out to be a Christian or an atheist. Also, even if Syed was a devout Muslim, he could have had mental health problems, even a psychotic break with reality. 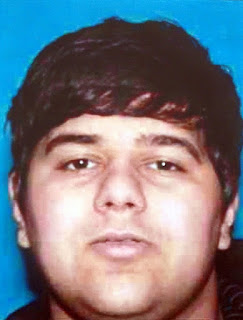 How is this relevant to clearing up confusion? Consider this. When a terrorist like Nidal Malik Hasan, a self-proclaimed “Solder of Allah,” opens fire on unsuspecting victims while shouting “Allahu Akbar,” politicians and the media are quick to remind us that all religions have their radicals, that people of all backgrounds can have mental health problems, and so on.

True. But this response leaves out an important difference between Islam and other ideologies. Muhammad commanded his followers to violently subjugate non-Muslims (Qur’an 9:29), and terrorism is a divinely-ordained response to aggression, criticism, etc., in Islam (Qur’an 5:33, 8:12, etc.). Hence, while it’s possible for someone who happens to be a Muslim to have a psychological break and to go on a killing spree that has nothing to do with his religion (which would be a possibility for adherents of any ideology), it’s also possible for a Muslim to go on a killing spree specifically because his religion advocates killing for the sake of Allah (a possibility that does not exist for Christians and other non-Muslims). Similarly, a Muslim may become extremely angry at his wife and kill her in a fit of rage, a tragedy that could (and does) happen among non-Muslims as well. But a Muslim may also kill his wife because his religion supports honor killings, a practice which is not supported by other religions.